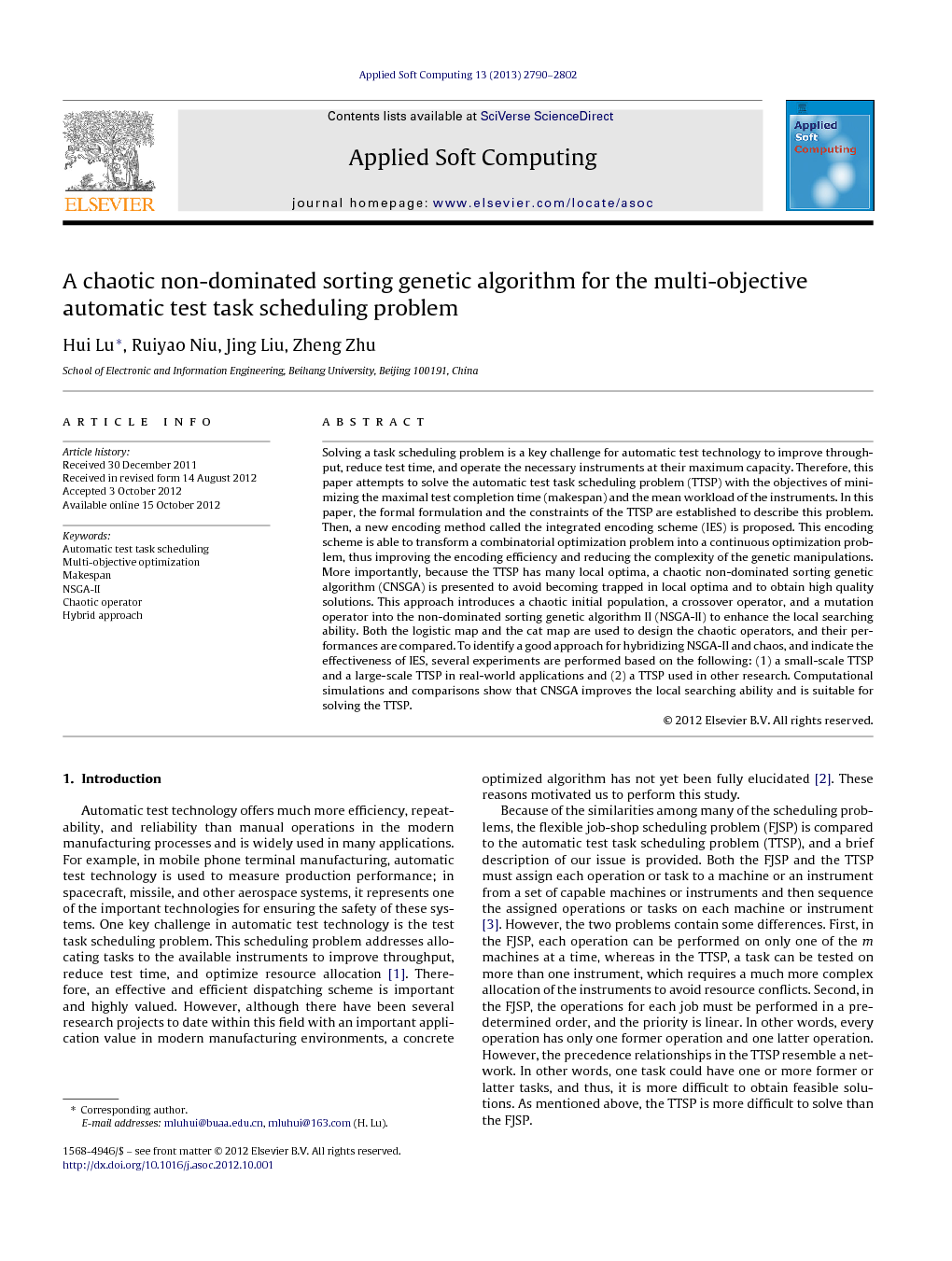 Solving a task scheduling problem is a key challenge for automatic test technology to improve throughput, reduce test time, and operate the necessary instruments at their maximum capacity. Therefore, this paper attempts to solve the automatic test task scheduling problem (TTSP) with the objectives of minimizing the maximal test completion time (makespan) and the mean workload of the instruments. In this paper, the formal formulation and the constraints of the TTSP are established to describe this problem. Then, a new encoding method called the integrated encoding scheme (IES) is proposed. This encoding scheme is able to transform a combinatorial optimization problem into a continuous optimization problem, thus improving the encoding efficiency and reducing the complexity of the genetic manipulations. More importantly, because the TTSP has many local optima, a chaotic non-dominated sorting genetic algorithm (CNSGA) is presented to avoid becoming trapped in local optima and to obtain high quality solutions. This approach introduces a chaotic initial population, a crossover operator, and a mutation operator into the non-dominated sorting genetic algorithm II (NSGA-II) to enhance the local searching ability. Both the logistic map and the cat map are used to design the chaotic operators, and their performances are compared. To identify a good approach for hybridizing NSGA-II and chaos, and indicate the effectiveness of IES, several experiments are performed based on the following: (1) a small-scale TTSP and a large-scale TTSP in real-world applications and (2) a TTSP used in other research. Computational simulations and comparisons show that CNSGA improves the local searching ability and is suitable for solving the TTSP.

In this paper, a chaotic non-dominated sorting genetic algorithm is proposed for solving the multi-objective automatic test task scheduling problem. The two objectives are the minimization of the makespan and the minimization of the mean workload of the instruments. The problem description for the TTSP is given in Section 4. Afterwards, a novel integrated encoding scheme is proposed that can transform a combinatorial optimization problem into a continuous optimization problem. This encoding scheme integrates the information regarding both the processing sequence of the tasks and the occupancy of the instruments for every task into only one chromosome. Therefore, it leads to a reduction of the complexity of genetic manipulations and an improvement in the encoding efficiency. Furthermore, because the TTSP is a combinatorial optimization problem and has many local optima, the proposed algorithm CNSGA introduces the chaotic initial population, the chaotic crossover operator, and the chaotic mutation operator into NSGA-II, using both the logistic map and the cat map, to enrich the local search behavior. Because of the ergodicity and the pseudo-randomness of chaos, the local searching ability of CNSGA is better than that of the normal NSGA-II. This scenario has been confirmed by computational results obtained from two types of experiments. According to the different capabilities of the logistic and the cat chaotic operators, the CNSGA approach using the cat population initialization, the cat or logistic crossover operator, and the logistic mutation operator performs well and is very suitable for solving the TTSP. Future work includes study of the performances of additional chaotic maps and discovery of the reasons for their special properties. In addition, other multi-objective algorithms can be combined with chaotic operators to achieve better effects