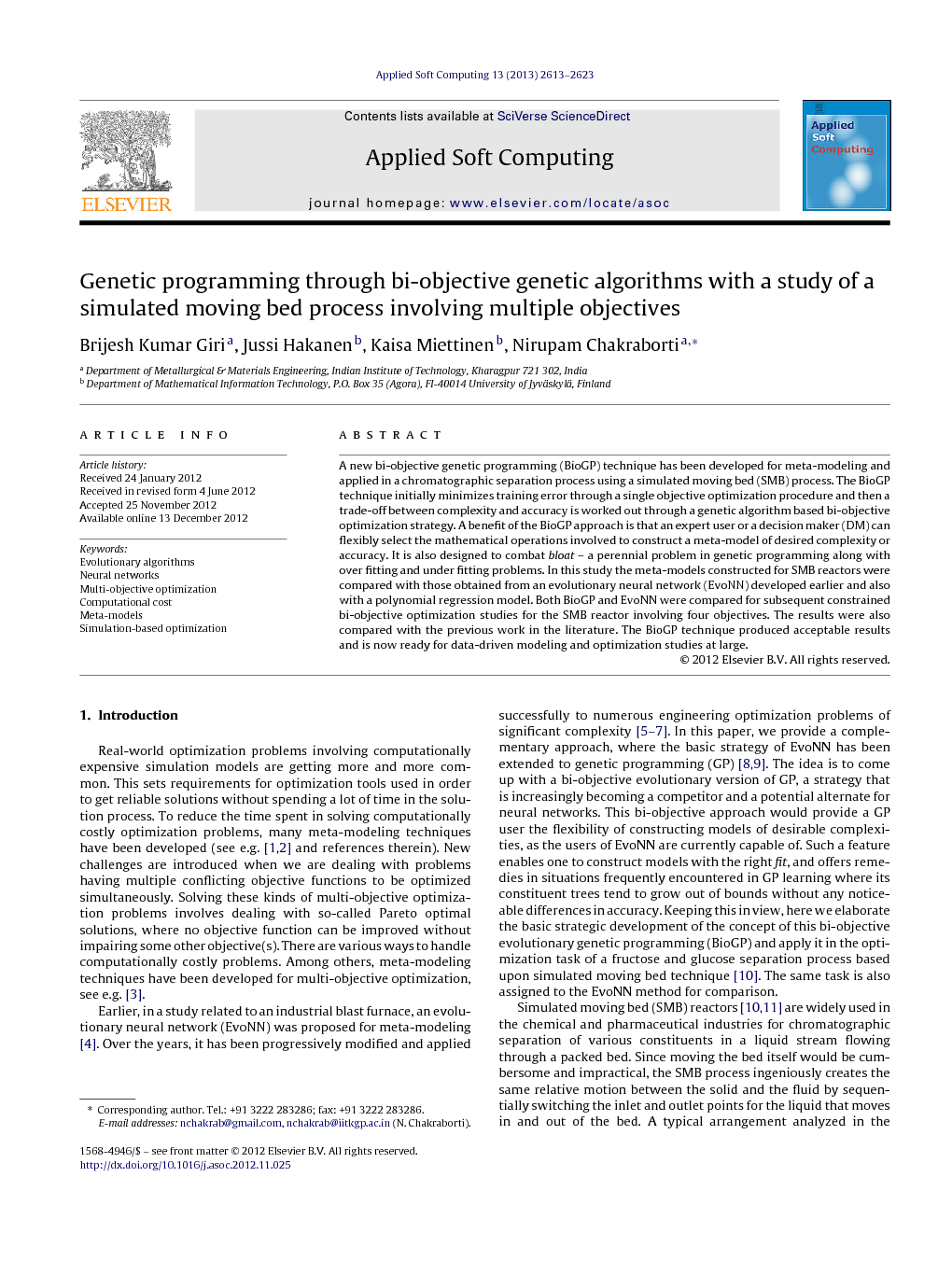 A new bi-objective genetic programming (BioGP) technique has been developed for meta-modeling and applied in a chromatographic separation process using a simulated moving bed (SMB) process. The BioGP technique initially minimizes training error through a single objective optimization procedure and then a trade-off between complexity and accuracy is worked out through a genetic algorithm based bi-objective optimization strategy. A benefit of the BioGP approach is that an expert user or a decision maker (DM) can flexibly select the mathematical operations involved to construct a meta-model of desired complexity or accuracy. It is also designed to combat bloat – a perennial problem in genetic programming along with over fitting and under fitting problems. In this study the meta-models constructed for SMB reactors were compared with those obtained from an evolutionary neural network (EvoNN) developed earlier and also with a polynomial regression model. Both BioGP and EvoNN were compared for subsequent constrained bi-objective optimization studies for the SMB reactor involving four objectives. The results were also compared with the previous work in the literature. The BioGP technique produced acceptable results and is now ready for data-driven modeling and optimization studies at large.

Real-world optimization problems involving computationally expensive simulation models are getting more and more common. This sets requirements for optimization tools used in order to get reliable solutions without spending a lot of time in the solution process. To reduce the time spent in solving computationally costly optimization problems, many meta-modeling techniques have been developed (see e.g. [1] and [2] and references therein). New challenges are introduced when we are dealing with problems having multiple conflicting objective functions to be optimized simultaneously. Solving these kinds of multi-objective optimization problems involves dealing with so-called Pareto optimal solutions, where no objective function can be improved without impairing some other objective(s). There are various ways to handle computationally costly problems. Among others, meta-modeling techniques have been developed for multi-objective optimization, see e.g. [3]. Earlier, in a study related to an industrial blast furnace, an evolutionary neural network (EvoNN) was proposed for meta-modeling [4]. Over the years, it has been progressively modified and applied successfully to numerous engineering optimization problems of significant complexity [5], [6] and [7]. In this paper, we provide a complementary approach, where the basic strategy of EvoNN has been extended to genetic programming (GP) [8] and [9]. The idea is to come up with a bi-objective evolutionary version of GP, a strategy that is increasingly becoming a competitor and a potential alternate for neural networks. This bi-objective approach would provide a GP user the flexibility of constructing models of desirable complexities, as the users of EvoNN are currently capable of. Such a feature enables one to construct models with the right fit, and offers remedies in situations frequently encountered in GP learning where its constituent trees tend to grow out of bounds without any noticeable differences in accuracy. Keeping this in view, here we elaborate the basic strategic development of the concept of this bi-objective evolutionary genetic programming (BioGP) and apply it in the optimization task of a fructose and glucose separation process based upon simulated moving bed technique [10]. The same task is also assigned to the EvoNN method for comparison. Simulated moving bed (SMB) reactors [10] and [11] are widely used in the chemical and pharmaceutical industries for chromatographic separation of various constituents in a liquid stream flowing through a packed bed. Since moving the bed itself would be cumbersome and impractical, the SMB process ingeniously creates the same relative motion between the solid and the fluid by sequentially switching the inlet and outlet points for the liquid that moves in and out of the bed. A typical arrangement analyzed in the earlier studies [11] is shown schematically in Fig. 1, consisting of a number of separating columns connected in a loop with two inlet streams (feed and desorbent) and also two outlet streams (raffinate and extract).Fairly comprehensive analytical models are available for the SMBreactors [10] and [11]. However, coupling the direct numerical solutions of the complicated model equations with a multi-objective optimization scheme, particularly if using population based evolutionary computation, would lead to a very heavy, and often unmanageable, computational burden. This has been done, e.g., in [12], where the authors apply an evolutionary multi-objective optimization algorithm (NSGA) to the direct synthesis of methyl tertiary butyl ether from tertiary butyl alcohol using e.g. SMB techniques. They consider problems having only two or three objectives due to computational aspects, although they acknowledge that the number of objectives could be higher. They do not report anything on how much time it took to solve those problems. The remedy for the computational burden would be to come up with some efficient meta-models that could be effectively used during the optimization task instead of the original time-consuming models. The rest of this paper is organized as follows: A brief overview of evolutionary neural network is provided in Section 2 followed by the details of the proposed BioGP technique in Section 3. After that, a multi-objective optimization problem related to the SMB process is described. Furthermore, results obtained by applying BioGP are presented and compared to those obtained with EvoNN as well as previous research. The paper is concluded in Section 5.

Evolutionary multi-objective optimization applications are now firmly established in the chemical engineering literature [33] and this study attempts to establish how the scope of such work could be further enhanced through a novel genetic programming paradigm to come up with computationally inexpensive meta-models that can replace original computationally expensive models. Till date very few studies are available in the literature that would attempt to apply multiple objectives in GP design [9] and [34]. The obvious advantage is demonstrated in this work. The BioGP technique introduced also recognizes the need for hybridization between single and bi-criteria approaches during the learning process, in order to provide a speedy convergence toward multiple options at a desirable accuracy level. Traditionally, the concept of using the bias falls in the realm of neural networks and was not used in an earlier attempt to use BioGP in a metallurgical problem [35]. The current version of BioGP demonstrates its usefulness in the context of GP as well. As GP literature discusses in detail [8] and [9], a major bottleneck of GP training is the occurrence of bloat – a situation where the trees continue to grow unmanageably larger with very little improvement in prediction error. Splitting the whole tree into a number of roots and continuously evaluating each for their effective contribution is a remedial measure that allowed BioGP to effectively function without any occurrence of bloat. Further hybridization with a linear least square solver ensured speedy and mathematically acceptable convergence compared to the conventional GP algorithms. In this paper, multiple objectives have been considered on two levels: inside meta-modeling and in a multi-objective optimization problem to be solved. In the level of fitting a meta-model to the given data one must balance between two conflicting criteria: complexity and accuracy. Furthermore, an SMB process involving multiple conflicting objectives was solved as an example case here and a meta-model had to be fitted to each of its objectives. In the level of solving the original multi-objective optimization problem, using the meta-models instead of the original objectives enabled faster solution times. However, only two of the objectives could be optimized simultaneously. We have here compared the performance of BioGP to that of earlier presented EvoNN in the case of the SMB process. However, the code for BioGP is not specific for that process and its further applications in data-driven modeling at large is clearly envisaged.