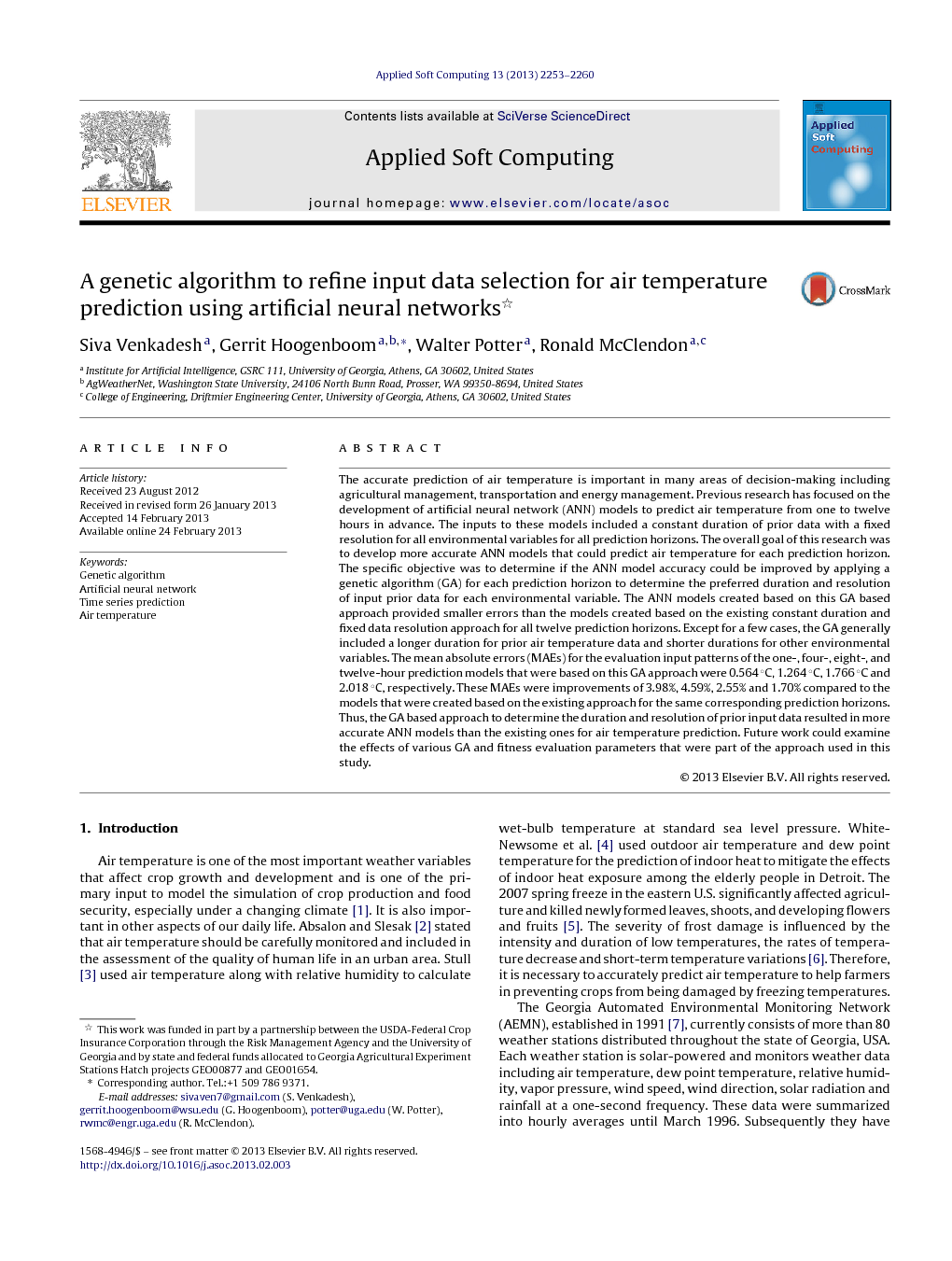 The accurate prediction of air temperature is important in many areas of decision-making including agricultural management, transportation and energy management. Previous research has focused on the development of artificial neural network (ANN) models to predict air temperature from one to twelve hours in advance. The inputs to these models included a constant duration of prior data with a fixed resolution for all environmental variables for all prediction horizons. The overall goal of this research was to develop more accurate ANN models that could predict air temperature for each prediction horizon. The specific objective was to determine if the ANN model accuracy could be improved by applying a genetic algorithm (GA) for each prediction horizon to determine the preferred duration and resolution of input prior data for each environmental variable. The ANN models created based on this GA based approach provided smaller errors than the models created based on the existing constant duration and fixed data resolution approach for all twelve prediction horizons. Except for a few cases, the GA generally included a longer duration for prior air temperature data and shorter durations for other environmental variables. The mean absolute errors (MAEs) for the evaluation input patterns of the one-, four-, eight-, and twelve-hour prediction models that were based on this GA approach were 0.564 °C, 1.264 °C, 1.766 °C and 2.018 °C, respectively. These MAEs were improvements of 3.98%, 4.59%, 2.55% and 1.70% compared to the models that were created based on the existing approach for the same corresponding prediction horizons. Thus, the GA based approach to determine the duration and resolution of prior input data resulted in more accurate ANN models than the existing ones for air temperature prediction. Future work could examine the effects of various GA and fitness evaluation parameters that were part of the approach used in this study

In this study, ANN models were developed to predict air temperature by performing a GA search to determine the optimal duration and resolution of prior data for each weather variable that was considered as a potential input variable for the model. These ANN models had higher accuracies than the ANN models that were developed based on the existing approach. This approach identified the contributive roles of various weather variables in predicting air temperature by using resource-intensive computational intelligence techniques. The ANN models based on the existing CDFR approach were recreated using the same datasets used to create the ANN models based on the new approach for a fair comparison. The GA based approach with a restricted parameter setting for the fitness evaluation produced more accurate models for one- through ten- and twelve-hour prediction horizons, but did not produce more accurate model for the eleven-hour prediction horizon. A limited study was performed that ran the GA with an increased number of ANN training patterns for the fitness evaluation for one-, four-, eight-, eleven-, and twelve-hour prediction horizons. Except for the eight-hour prediction horizon, the final ANN models developed using this extended GA based approach were the most accurate models developed in this study for their respective prediction horizons. Using the extended GA based approach, the highest improvement in the accuracy was achieved for the four-hour prediction horizon with a 4.59% improvement, compared to the accuracy of the model created based on the existing approach. However, the methodology used in this study could be further improved by exploring and fine-tuning various computational parameters. The extended GA runs showed that the GASDR model accuracies were generally improved by increasing the number of ANN training patterns used for the fitness evaluation. With additional computational resources, the number of ANN training patterns and the number of random network instantiations could be further increased for the GA fitness evaluation. Other possible parameters that could be explored include the GA population size, the crossover and the mutation operators and their probabilities, and the number of segments in the prior data for a weather variable. Another possible study is to explore the effects of applying other search algorithms such as particle swarm optimization to determine the duration and resolution of prior data for each weather variable.