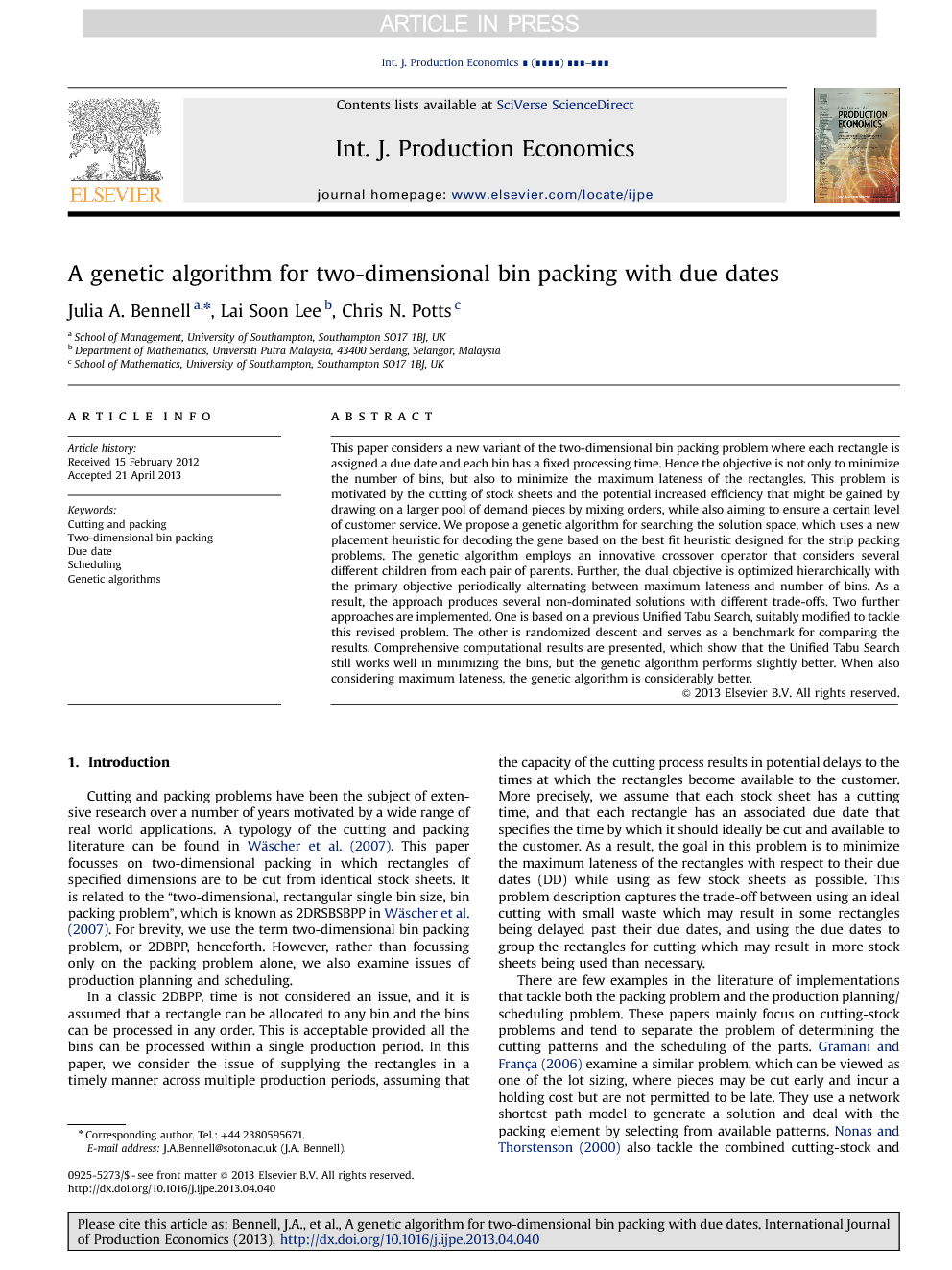 This paper considers a new variant of the two-dimensional bin packing problem where each rectangle is assigned a due date and each bin has a fixed processing time. Hence the objective is not only to minimize the number of bins, but also to minimize the maximum lateness of the rectangles. This problem is motivated by the cutting of stock sheets and the potential increased efficiency that might be gained by drawing on a larger pool of demand pieces by mixing orders, while also aiming to ensure a certain level of customer service. We propose a genetic algorithm for searching the solution space, which uses a new placement heuristic for decoding the gene based on the best fit heuristic designed for the strip packing problems. The genetic algorithm employs an innovative crossover operator that considers several different children from each pair of parents. Further, the dual objective is optimized hierarchically with the primary objective periodically alternating between maximum lateness and number of bins. As a result, the approach produces several non-dominated solutions with different trade-offs. Two further approaches are implemented. One is based on a previous Unified Tabu Search, suitably modified to tackle this revised problem. The other is randomized descent and serves as a benchmark for comparing the results. Comprehensive computational results are presented, which show that the Unified Tabu Search still works well in minimizing the bins, but the genetic algorithm performs slightly better. When also considering maximum lateness, the genetic algorithm is considerably better.

In this paper, a new two-dimensional rectangular, single bin size, bin packing problem is defined where the rectangles to be packed have associated due dates. The objective is twofold: to minimize the number of bins used, and to minimize the maximum lateness. This problem helps to build bridges between the fields of bin packing and production scheduling. A new heuristic placement routine for two-dimensional bin packing called Best Fit Bin (BFB) is described, and its performance is compared with the best performing placement heuristics in the bin packing literature. When considering both its computational complexity and solution quality, BFB is an attractive choice. A multicrossover genetic algorithm (MXGA) is proposed to solve the classical non-oriented 2DBPP, the new problem variant with due dates and also the bicriteria problem. Various devices have been introduced into the MXGA to further enhance the solutions generated. In comparative computational results for the classical 2DBPP, MXGA achieves better performance compared to a single crossover genetic algorithm, the Unified Tabu Search (UTS) method of Lodi et al., 1999a, Lodi et al., 1999b and Lodi et al., 2004, and to a randomized descent method. However, the relative quality of the results is not so clear cut for the 2DBPP with DD, where the MXGA has mixed success when compared with UTS.