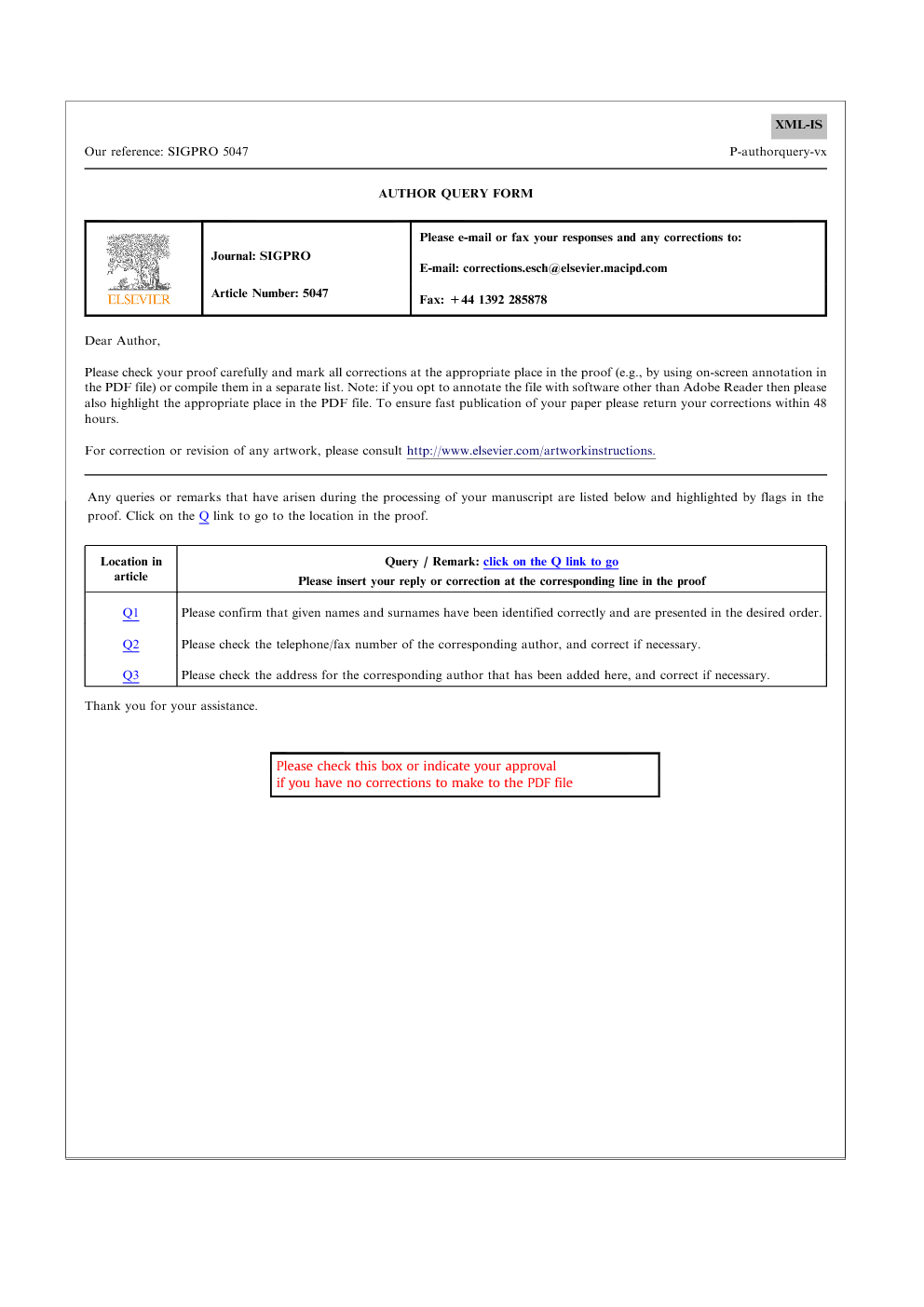 With the classification performance and computational complexity in mind, we propose a new optimized distribution sampling test (ODST) classifier for automatic classification of M-QAM signals. In ODST, signal cumulative distributions are sampled at pre-established locations. The actual sampling process is transformed into simple counting task for reduced computational complexity. The optimization of sampling locations is based on theoretical signal models derived under various channel conditions. Genetic Algorithm (GA) is employed to optimize distance metrics using sampled distribution parameters for distribution test between signals. The final decision is made based on distances between tested signal and candidate modulations. By using multiple sampling locations on signal cumulative distributions, the classifier's robustness is enhanced for possible signal statistical variance or signal model mismatching. AWGN channel, phase offset, and frequency offset are considered to evaluate the performance of the proposed algorithm. Experimental results show that the proposed method has advantages in both classification accuracy and computational complexity over most existing classifiers.

Automatic Modulation Classification (AMC) has been an established research topic for many years. The initial application of AMC was mostly in military electronic warfare, surveillance and threat analysis [1]. The main purpose of AMC is to classify automatically the modulation type of the intercepted signal so that it can be correctly demodulated. Many papers, e.g. [2], [3], [4], [5] and [6], have been published suggesting different solutions for this problem. Recently, as intelligent radio communication systems emerges in modern civilian communication applications, AMC, which is an important component in the adaptive modulation module, has attracted much attention from Cognitive Radio (CR) and Software Defined Radio (SDR) developers, e.g. [7], [8] and [9]. The fundamental task of AMC remains the same, though new challenges arise in the current CR and SDR development environments. One obvious difficulty comes from the different modulation types being used. In recent years, the use of signal modulations has migrated towards Quadrature Amplitude Modulations (QAM) due to their ability of efficient high capacity data transmission. The popularity of QAM modulations can be easily verified with their presence in many modern radio communication standards. In IEEE 802.11a [10], BPSK, 4-QAM, 16-QAM and 64-QAM are employed as modulations for many wireless communications applications. In Digital Video Broadcasting Terrestrial (DVB-T) [11], 4-QAM, 16-QAM and 64-QAM are also universal selection for digital TV broadcasting. In this paper, 4-QAM, 16-QAM and 64-QAM have been chosen for the development of the proposed classifier. Nevertheless, modifications can be easily made to accommodate other QAM or wider selection of modulations. The classification of QAM modulations has its unique challenges as most of the signal features are very similar between different M-ary QAM (M-QAM) modulations. Another challenge for AMC is the demand for accurate classification performance under different channel conditions. In addition to channel effects, the demand for short processing time is also an interest for different applications which require real-time reconfiguration of the communication system. In short, the goal is to develop a simple AMC classifier which gives accurate and robust classification performance. Most existing AMC classifiers can be grouped into two categories: likelihood based (ML) classifiers and feature based classifiers. A likelihood based classifier could give the upper bound of the classification accuracy given the condition of accurate channel estimation. Wei and Mendel [12] presented the ML method that provides the optimum performance with the correct channel estimation. More ML based classifiers, e.g. [13], [14] and [15], have been developed recently to suit different modulations and channel conditions. However, the computational complexity is a major concern. It has led many sub-optimal approaches to be developed in order to have reduced complexity. Wong and Nandi used Minimum Distance (MD) classifier [16] to reduce the complexity. In a different way, Xu, Su and Zhou approached the complexity reduction problem by storing the pre-calculated values in quantized databases for avoiding complex operations [17]. These aforementioned methods have all successfully reduced the complexity to different degrees with certain amount of performance degradation. For the purpose of further reducing the computational complexity, algorithms based on distribution tests have been developed and presented in some recent publications. Wang and Wang [18] used Kolmogorov–Smirnov Test (K–S test) [19] to formulate a solution by comparing the testing signal Cumulative Distribution Functions (CDFs) with the reference modulation CDFs. This method successfully achieved an improved performance especially when limited signal length is available. It was pointed out in [20] that the K–S test approach requires the complete construction of signal CDFs which is relatively complex and has the potential to be simplified. In the same paper, an optimized approach was presented which reduces the complexity of K–S classifier by analyzing the CDFs between two modulations at a single given location. When multiple modulations are considered, multiple locations, each responsible for the classification of two modulations, have been used. The classification accuracy is comparable to the K–S classifier and the complexity of the algorithm is reduced significantly. However, it is clear that the embedded information in CDFs is underutilized and the robustness of this approach can be improved. To overcome these limitations, we have developed the optimized distribution sampling test (ODST) classifier which conducts simplified distribution tests at multiple optimized sampling locations to achieve the balance between simplicity and performance. A feature based classifier generally consists of few steps including feature extraction, feature selection, and classification. A classic example of feature based AMC method can be found in [21] where multiple features are used with a decision tree classifier and Artificial Neural Network (ANN) classifier. In recent years, higher-order statistics [5] has proven to be well suited for M-QAM signals classification. Notably, the adoption of machine learning techniques show great potential in further enhancing the classification accuracy. Support Vector Machine [22], Artificial Neural Network [23], and Genetic Programming [24] have all been experimented with to select and combine existing features to exploit the full potential in them. Wong and Nandi [23] proposed to automate the feature selection process with Genetic Algorithm (GA) and successfully reduced the feature dimensions without degrading the classification performance. As distribution parameters estimated at sampling locations could be considered as features, GA has been employed for the optimization of distance metrics for the proposed ODST classifier. This paper is arranged in the following order. The signal models in different channel conditions are presented in Section 2. It is followed by a detailed description of the classification strategy as well as some extensive analysis in Section 3. Experiment setups are explained in Section 4, with detailed results and analysis given in Section 5. The conclusion is drawn at the end.