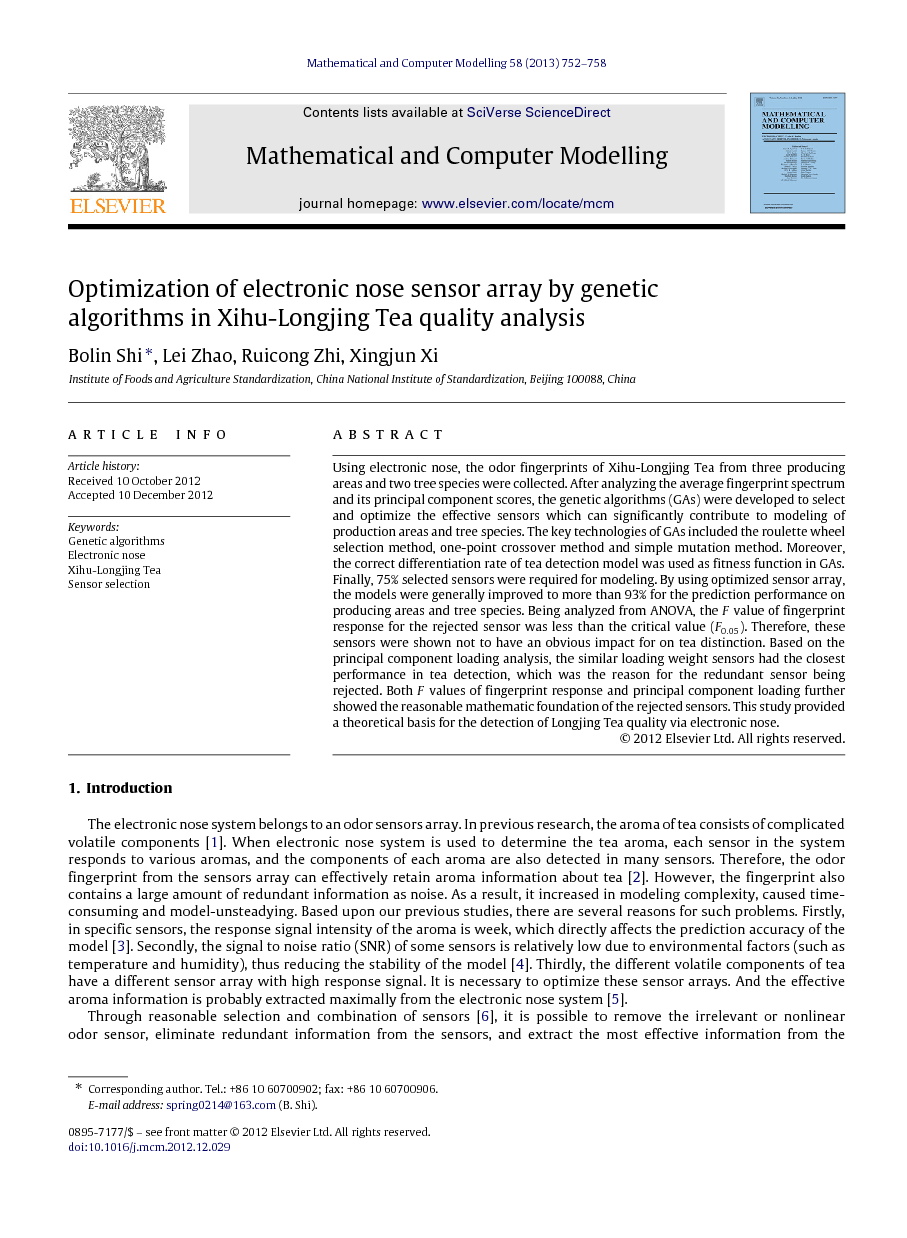 Using electronic nose, the odor fingerprints of Xihu-Longjing Tea from three producing areas and two tree species were collected. After analyzing the average fingerprint spectrum and its principal component scores, the genetic algorithms (GAs) were developed to select and optimize the effective sensors which can significantly contribute to modeling of production areas and tree species. The key technologies of GAs included the roulette wheel selection method, one-point crossover method and simple mutation method. Moreover, the correct differentiation rate of tea detection model was used as fitness function in GAs. Finally, 75% selected sensors were required for modeling. By using optimized sensor array, the models were generally improved to more than 93% for the prediction performance on producing areas and tree species. Being analyzed from ANOVA, the FF value of fingerprint response for the rejected sensor was less than the critical value (F0.05F0.05). Therefore, these sensors were shown not to have an obvious impact for on tea distinction. Based on the principal component loading analysis, the similar loading weight sensors had the closest performance in tea detection, which was the reason for the redundant sensor being rejected. Both FF values of fingerprint response and principal component loading further showed the reasonable mathematic foundation of the rejected sensors. This study provided a theoretical basis for the detection of Longjing Tea quality via electronic nose.

The electronic nose system belongs to an odor sensors array. In previous research, the aroma of tea consists of complicated volatile components [1]. When electronic nose system is used to determine the tea aroma, each sensor in the system responds to various aromas, and the components of each aroma are also detected in many sensors. Therefore, the odor fingerprint from the sensors array can effectively retain aroma information about tea [2]. However, the fingerprint also contains a large amount of redundant information as noise. As a result, it increased in modeling complexity, caused time-consuming and model-unsteadying. Based upon our previous studies, there are several reasons for such problems. Firstly, in specific sensors, the response signal intensity of the aroma is week, which directly affects the prediction accuracy of the model [3]. Secondly, the signal to noise ratio (SNR) of some sensors is relatively low due to environmental factors (such as temperature and humidity), thus reducing the stability of the model [4]. Thirdly, the different volatile components of tea have a different sensor array with high response signal. It is necessary to optimize these sensor arrays. And the effective aroma information is probably extracted maximally from the electronic nose system [5]. Through reasonable selection and combination of sensors [6], it is possible to remove the irrelevant or nonlinear odor sensor, eliminate redundant information from the sensors, and extract the most effective information from the intelligent smelling fingerprint. After that, the calibration model will be built with a better prediction capacity and simplified calculation [7]. This method can also leave out the sensors which have no obvious effect and even an adverse effect on model building. It is significant to reduce the manufacturing cost of electronic nose and improve the stability of the intelligent detecting system [8]. The sensor selection is an optimization problem which is often met in practice [9]. Currently, although the combination optimization method was used in some research [10], it was only grouping some sensors after preliminary rejecting, and could not achieve the effect of global optimization combination. The principal component loading value method [11] was also used to avoid the redundant sensors, but the responsive performance of the selected sensor is not analyzed. That is the response repetitiveness of the same sensor on the same sample and the response discrimination of the same sensor on different samples. The Genetic Algorithms (GAs) [12] and [13] are a kind of optimization method based on the principles of genetics and natural selection. The advantages of GAs are non-derivation, global optimization at random, avoiding falling into local minimal point and being easily realized, etc. This research was aimed at improving the discrimination ability of different producing areas and various tree species of Xihu-Longjing Tea by electronic nose. The GAs were applied to sensor selection as a combination optimization method. The optimized objective function was used by soft independent modeling of class analogy (SIMCA). The array subset of best sensors was selected via global searching and was used to build the predictive model for producing areas and various tree species of tea. Using this kind of optimization method, the numbers of sensors used in modeling are reduced, and the predictive performance of model was kept unchanged or improved. In order to explain the rejected sensors after GAs, the FF value via ANOVA on response performance of sensor and loading value by principal components analysis (PCA) were studied. The mathematic foundation for sensor rejection was determined.

With the features of parallel optimization and global convergence, GAs were applied on screening modeling sensors for analyzing tea production areas and tree-species discrimination by electronic nose. After sensor selecting, models QYT–QMT and LWJ–QWJ maintained the original high-prediction performance of 100% and 93.94%, respectively. Significantly, the sensors were reduced to build the prediction model from 18 to 7 and 14 for models QYT–QMT and LWJ–QWJ, respectively. In model LYJ–LWJ and LMT–QMT, the sensors were selected and reduced, and the prediction performance of models was improved by more than 3%. In conclusion, this method not only reduced the number of modeling sensors, simplified the model, degraded the requirements of sensor quantity, and saved resources and instrument costs, but also maintained or further improved prediction precision and obtained better results.