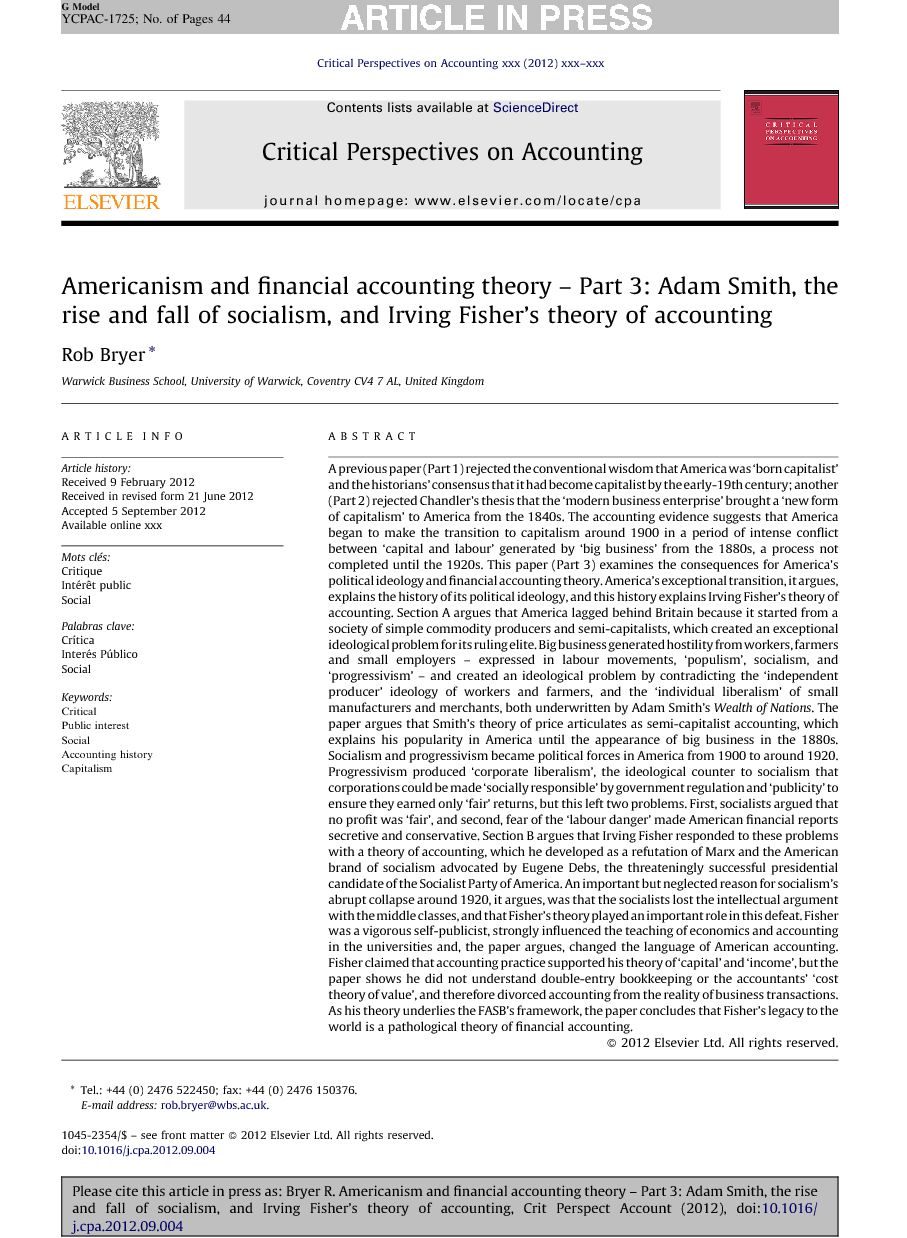 A previous paper (Part 1) rejected the conventional wisdom that America was ‘born capitalist’ and the historians’ consensus that it had become capitalist by the early-19th century; another (Part 2) rejected Chandler’s thesis that the ‘modern business enterprise’ brought a ‘ new form of capitalism’ to America from the 1840s. The accounting evidence suggests that America began to make the transition to capitalism around 1900 in a period of intense conﬂict between ‘ capital and labour’ generated by ‘big business’ from the 1880s, a process not completed until the 1920s. This paper (Part 3 ) examines the consequences for America’s political ideology and ﬁnancial accounting theory. America’s exceptional transition, it argues, explains the history of its political ideology, and this history explains Irving Fisher’s theory o f accounting. Section A argues that America lagged behind Britain because it started from a society of simple commodity producers and semi-capitalists, which created a n exceptional ideological problem for its ruling e lite. Big business generated hostility from workers, farmers and small employers – expressed in labour movements, ‘populism’, socialism, and ‘progressivism’ – and created an ideological problem by contradicting the ‘independent producer’ ideology of workers and farmers, and the ‘individual liberalism’ of small manufacturers and merchants, both underwritten b y Adam Smith’s Wealth o f Nations.The paper argues that Smith’s theory of price articulates as semi-capitalist accounting, which explains his popularity in America until the appearance of big business i n the 1880s. Socialism and progressivism became political forces in America from 1900 to around 1920. Progressivism produced ‘corporate liberalism’, the ideological counter to socialism that corporations could be made ‘socially responsible’ by government regulation and ‘publicity’ to ensure they earned only ‘ fair’ returns, but this left two problems. First, socialists argued that no proﬁt was ‘fair’, and second, fear of the ‘labour danger’ made American ﬁnancial reports secretive and conservative. Section B argues that Irving Fisher responded to these problems with a theory of accounting, which he developed as a refutation of Marx and the American brand of socialism advocated by Eugene Debs, the threateningly successful presidential candidate of the Socialist Party of America. An important but neglected reason for socialism’s abrupt collapse around 1920, it argues, was that the socialists lost the intellectual argument with the middle classes, and that Fisher’s theory played an important role in this defeat. Fisher was a vigorous self-publicist, strongly inﬂuenced the teaching of economics and accounting in the universities and, the paper argues, changed the language of American accounting. Fisher claimed that accounting practice supported h is theory of ‘capital’ and ‘income’, but the paper shows he did not understand double-entry bookkeeping or the accountants’ ‘ cost theory of value’, and therefore divorced accounting from the reality of business transactions. As his theory underlies the FASB’s framework, the paper concludes that Fisher’s legacy to the world is a pathological theory of ﬁnancial accounting.

Parts 1 and 2 used Marx’s theories of the transition to capitalism in England, colonisation, and ideology, to construct and test an accounting history model of America’s transition to capitalism that they used to explore the historical links between its ideology and accounting. They examined and rejected the hypotheses that (a) America was born capitalist or became capitalist by the early 19th century or, alternatively, (b) it ﬁrst appeared on the railroads as ‘managerial capitalism’. The accounting evidence suggests America became capitalist around 1900 in the midst of intense social, economic and political conﬂict, and caught up with Britain’s advanced form by the late 1920s. This paper (Part 3) argued that the history of America’s political ideology reﬂected its accounting history, which supported the hypothesis that Fisher’s theory of accounting was the product of an ideological crisis caused by its exceptional transition to capitalism. There is no doubt that Fisher designed his theory as an attack on socialism, or that it impressed contemporary economists, politicians, the big business class, and economic and accounting theorists and teachers. It is therefore plausible that his theory impressed the middle classes and helped ensure that the values of ‘Americanism’, of ‘‘equality, freedom, individualism, populism, and laissez-faire’’ (Lipset, 1996 , p . 18), continued to include ‘laissez-faire’, and do not end with ‘collectivism’. The papers have argued that this required more than political or economic rhetoric; that it took America’s exceptional history to produce its exceptional theory of ﬁnancial accounting, which helped to reproduce an exceptional ideology; that America’s ruling elite needed and were given a new ‘language of real life’ grounded in a new theory of accounting. Whether the model and evidence are helpful depends on whether they have produced an ‘interesting’ history, that is, allow us to understand important features of the past and their links to the present. The papers have argued that accounting history illuminates the causes and consequences of the American Revolution, the nature of American slavery, its Civil War, the causes and timing of its transition to capitalism, its labour history, and the history of its political ideology. However, there is much research to do to further test and either reject the model or reﬁne it to turn a plausible history into a convincing explanation, and in using it to understand capitalism today. More work is needed investigating the archives for historical evidence of the capitalist mentality (see Parts 1 and 2), in tracing political inﬂuences on Fisher, and his inﬂuence on the language of American politicians, business leaders, the investing classes, the middle class, and the workers, and investigating the consequences on accounting practice, management accountability, and investing behaviour. Fisher’s theory, for example, could explain the apparent ideological paradox of why ‘‘the United States has been transformed from a nation of small capitalists [sic] into a nation of hired employees; but the ideology suitable for the nation of small capitalists persists as if that small propertied world were still a going concern’’ ( Mills, 1951 , p . 34). Its acceptance by the middle classes could explain why, particularly from the 1930s in the face of a revival of militant trade unionism, ‘‘big business began to promulgate and use the image of the small businessman’’ ( Armstrong, 2005 , pp. 22–26; Mills, 1951, p . 44). In Fisher’s theory, corporations are useful legal entities, aggregations of individuals in pursuit of self-interest, not qualitatively different from small entrepreneurs. Big business leaders can, therefore, without embarrassment clothe themselves in the ideology of small business and the family farm and support ‘free competition’, use ‘‘its image to ... [pursue] the political interests of larger business’’, to justify its position in the community ( Mills, 1951 , pp. 35, 36), to freely draw on Adam Smith’s theory even while they subvert it. The inﬂuence of Fisher’s theory could help to explain the continuing American love affair with Adam Smith today and the ideological power of corporate capital. The key question, however, is whether Fisher’s theory has realised its pathological potential. Did it create the ‘‘big mess’’ that Hatﬁeld and others saw in American accounting during the 1920s (1928, quoted in Zeff, 2000, p . 133), and did this contribute to the stock market crash in 1929? Bryer (2011) argues it did. A vital question is Fisher’s inﬂuence on accounting today. Following his fall from grace in 1929, economists and accounting theorists shunned his work. Schumpeter predicted he would be seen as America’s ‘‘greatest scientiﬁc economist’’ (1948, p . 219), and in 1958 Hirshleifer rehabilitated Fisher’s intellectual reputation, following which economists, accounting scholars, and regulators, began to take his work seriously again, and ‘‘economists today regard him as the greatest American economist through his lifetime’’ ( Allen, 1993 , pp. 16–17). They revere him as a noted ‘‘scientist’’ (Allen, 1993, passim; Dimand and Geanakoplos, 2005). Not just economists, ‘‘the public still think and work with concepts and theories that he helped to develop and reﬁne’’ ( Allen, 1993 , p . 17, emphasis added). Importantly, Fisher inﬂuenced accounting academics, practitioners, and regulators. His neoclassical theory inﬂuenced Hatﬁeld (1909), Paton (1922) and Canning (1929) (Bryer, 2011; Chambers, 1971; Lee, 1979; Mouck, 1995; Whittington, 1977), and through them and others it underlies the FASB’s conceptual framework. Understanding this framework as the product of American history could explain why the world divides over the purpose of ﬁnancial reporting, why global convergence around US GAAP has proven difﬁcult (Camfferman and Zeff, 2007). Whether effective global accounting standards are likely or even possible depends, in part, on whether Fisher’s theory is pathological. Important questions for research are whether the FASB’s conceptual framework helped to produce ‘Enronitis’ around the turn of the millennium, and the ‘credit crunch’ of 2007? Evidence that it did would support the hypothesis that American accounting theory is the pathological product of the exceptional history of its ideology, of ‘Americanism’.