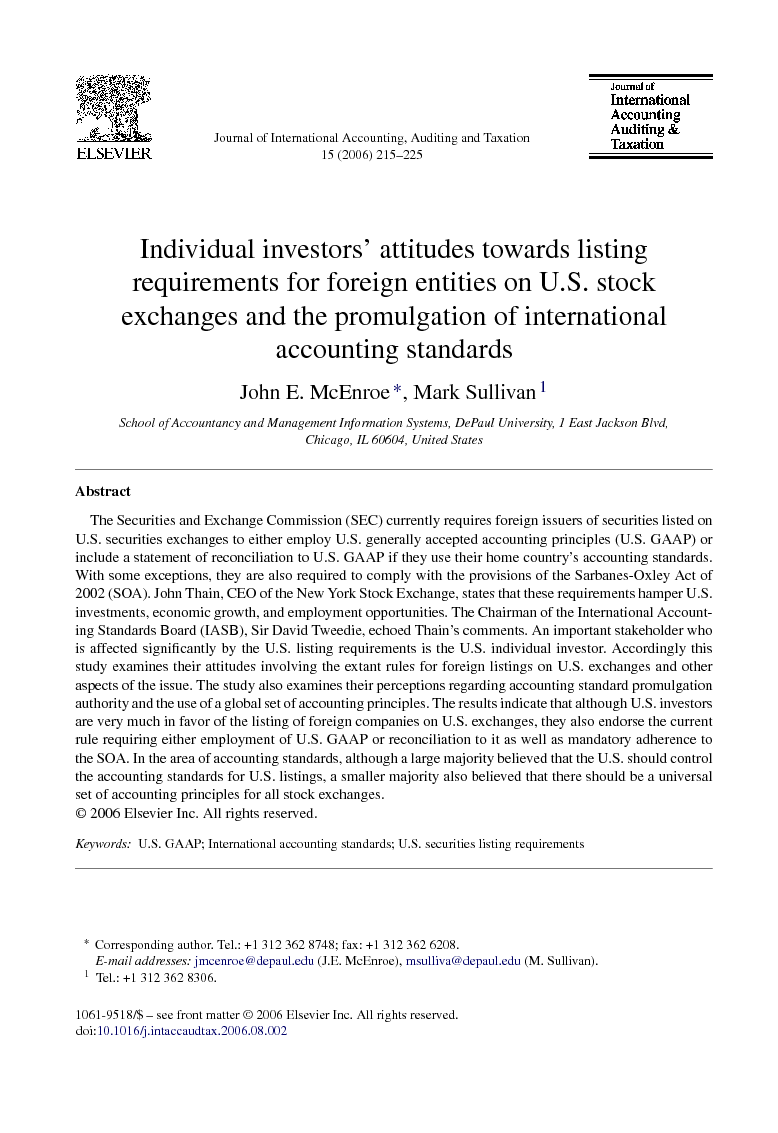 The Securities and Exchange Commission (SEC) currently requires foreign issuers of securities listed on U.S. securities exchanges to either employ U.S. generally accepted accounting principles (U.S. GAAP) or include a statement of reconciliation to U.S. GAAP if they use their home country's accounting standards. With some exceptions, they are also required to comply with the provisions of the Sarbanes-Oxley Act of 2002 (SOA). John Thain, CEO of the New York Stock Exchange, states that these requirements hamper U.S. investments, economic growth, and employment opportunities. The Chairman of the International Accounting Standards Board (IASB), Sir David Tweedie, echoed Thain's comments. An important stakeholder who is affected significantly by the U.S. listing requirements is the U.S. individual investor. Accordingly this study examines their attitudes involving the extant rules for foreign listings on U.S. exchanges and other aspects of the issue. The study also examines their perceptions regarding accounting standard promulgation authority and the use of a global set of accounting principles. The results indicate that although U.S. investors are very much in favor of the listing of foreign companies on U.S. exchanges, they also endorse the current rule requiring either employment of U.S. GAAP or reconciliation to it as well as mandatory adherence to the SOA. In the area of accounting standards, although a large majority believed that the U.S. should control the accounting standards for U.S. listings, a smaller majority also believed that there should be a universal set of accounting principles for all stock exchanges.

Under existing federal securities legislation, foreign issuers of securities listed on U.S. securities exchanges must either prepare financial statements in accordance with United States generally accepted accounting principles (U.S. GAAP) or, if they utilize non-U.S. GAAP as their primary accounting principles, include a reconciliation to U.S. GAAP as a part of the financial statements (SEC, 2004). A few of the foreign issuers that are listed employ U.S. GAAP as their primary accounting principles, but most file their annual reports with the Securities and Exchange Commission (SEC) on Form 20-F, which incorporates the reconciliation. These issuers prepare their primary financial reports based on their home country's accounting standards and meet the requirements for U.S. exchange listing by filing the required reconciliation. A separate but related issue regarding the listed securities of foreign companies is compliance with the Sarbanes-Oxley Act (SOA). The law did not provide exceptions for foreign issuers listed on U.S. exchanges. On the other hand, various provisions of the law provided authority to the SEC and/or the Public Company Accounting Oversight Board (PCAOB) to provide exemptions from specific provisions where the exemption was consistent with the purposes of the Act. As a result, the SEC delayed the implementation of certain rules until years which end after July 15, 2006. Also, the SEC has exempted foreign listed firms from a few SOA rules that are inconsistent with the laws of the home country. For example, non-management employees of the firm may serve on audit committees where that is mandated by the foreign country even though the regular SOA requirement would prohibit firm employees from serving on audit committees. Similarly, shareholders may select or ratify the selection of an auditing firm even though the terms of SOA would require that the audit committee be directly responsible for the appointment, compensation and oversight of the auditor. Recently there has been substantial activity in the area of convergence of U.S. GAAP and international standards with the objective of cross listing of securities on a global basis without the reconciliation requirement. The International Accounting Standards Board's (IASB) Chairman, Sir David Tweedie, succinctly underscored the issue's significance by stating, “it isn’t just about bookkeeping.” (Heffes, 2004, 18) Tweedie avers that convergence of international and U.S. GAAP standards and the possible elimination of the reconciliation requirement will encourage investment, growth, employment and world trade (Heffes, 2004). John Thain, CEO of the New York Stock Exchange (NYSE), made a similar but somewhat more self-interested point in a speech in May, 2004. He stated that between 1996 and 2001, 50 foreign companies per year listed on the NYSE. During 2002 and 2003, the number dropped to 25, including a very severe drop in European listings. He argued that every U.S. listing of a foreign company provides opportunities for more U.S. directed investment, growth, and jobs. In his view, the decline in foreign listings is an important issue for the U.S. economy and a significant issue for him to address in his capacity as CEO of the NYSE. Thain listed several factors he believed were discouraging foreign firms from listing in the United States, including the SOA, the reputation of the U.S. for anti-business litigation, and the growth of alternative capital markets. He also considered the lack of convergence in accounting systems between the U.S. and Europe as a significant impediment (Thain, 2004). Given the current requirements for U.S. exchange listings and the related movement toward convergence of accounting principles, we survey the current attitudes of U.S. individual investors regarding various facets of foreign listings on U.S. exchanges. We also examine their perceptions involving the promulgation of accounting standards. We focus on individual investors because they are the primary constituency of the SEC with respect to this issue and because there is evidence of the growing international awareness and involvement of individual investors. That is, while there is a substantial existing literature documenting a “home bias” associated with individual investors, there is also substantial evidence of the activities of individual investors in international equities (Bailey, Kumar, & Ng, 2005). Bailey et al., obtained “a record of trades and monthly portfolio positions of individual investors with accounts at a major U.S. discount broker from January 1991 to November 1996.” Of the 62,387 investors who traded equities, 30,572 had traded international open-end mutual funds, American Depositary Receipts and other U.S. listed foreign incorporated stocks. They also point out that the time period of their data preceded the emergence of international exchange traded funds and online day trading by individuals. While we focus on the attitudes of individual investors, it is interesting to note that even U.S. institutional investors appear to have a significant bias toward investing in companies that comply with U.S. accounting principles. Bradshaw, Bushee, and Miller (2004) conducted a study involving U.S. institutional investors’ ownership in non-U.S. firms. They found that a higher level of ownership by such investors in these firms was positively related to the firms’ use of a greater number of accounting methods conforming to U.S. GAAP. They stated that their motivation for studying institutional investors was: (1) they are less likely than individual investors to be subject to the frictions that constrain international investing; and (2) they have become the largest source of capital in the world. The issue of the accounting requirements associated with listing on U.S. exchanges, then, is acknowledged to be important in itself and important to investors including individual investors. An overview of the current state of affairs regarding listing requirements and activities associated with the convergence of U.S. and international accounting standards follows. The paper then continues with a discussion of the research methods, results, and summary, conclusions and limitations of the study.

The results of this study indicate that U.S. individual investors very much favor the listing of foreign firms on U.S. stock exchanges. However, they also believe that foreign entities should either be required to use U.S. GAAP or to reconcile to it as a requisite for listing. Indeed, they are not in favor of a coded stock symbol indicating compliance with international GAAP as a viable substitute. Furthermore, they believe that a failure to employ U.S. GAAP and/or comply with Sarbanes-Oxley would make investors less inclined to invest in such firms. The results associated with the promulgation of accounting standards are less congruent. Although a vast majority of the investors perceive that the U.S. should control the accounting standards required for a listing on U.S. exchanges, a smaller majority agree that there should be one worldwide set of accounting standards for all firms on all stock exchanges. About the same majority, a little over 50%, think that an international standard setting body with U.S. representation should establish a global set of standards to be used for all exchanges. Less than a third of the respondents feel that the FASB should establish global accounting standards. Lastly, there is no clear preference for a rules versus a principles based set of international accounting standards. These results should be of interest to U.S. accounting regulators, standard-setting bodies, and stock exchanges, as well as their international counterparts. It is clear that U.S. investors perceive that there is a benefit to investing directly in foreign firms on U.S. exchanges, but as indicated earlier in our paper, such listings have decreased. Enhanced efforts by the FASB, SEC, and the IASB may be in order either to create an acceptable set of global accounting standards that would be acceptable for a U.S. listing, or to engender a level of comfort with IFRSs sufficient so the U.S. reconciliation requirement could be eliminated. While the survey participants represent an important segment of individual investors, it is likely that the members of the American Association of Individual Investors are somewhat more sophisticated than the average investor. Therefore, it would be inappropriate to draw conclusions from these data regarding all individual investors. Nevertheless, we feel that these results represent the viewpoint of an important group of individual investors and should be considered by the SEC and other policy setting bodies.