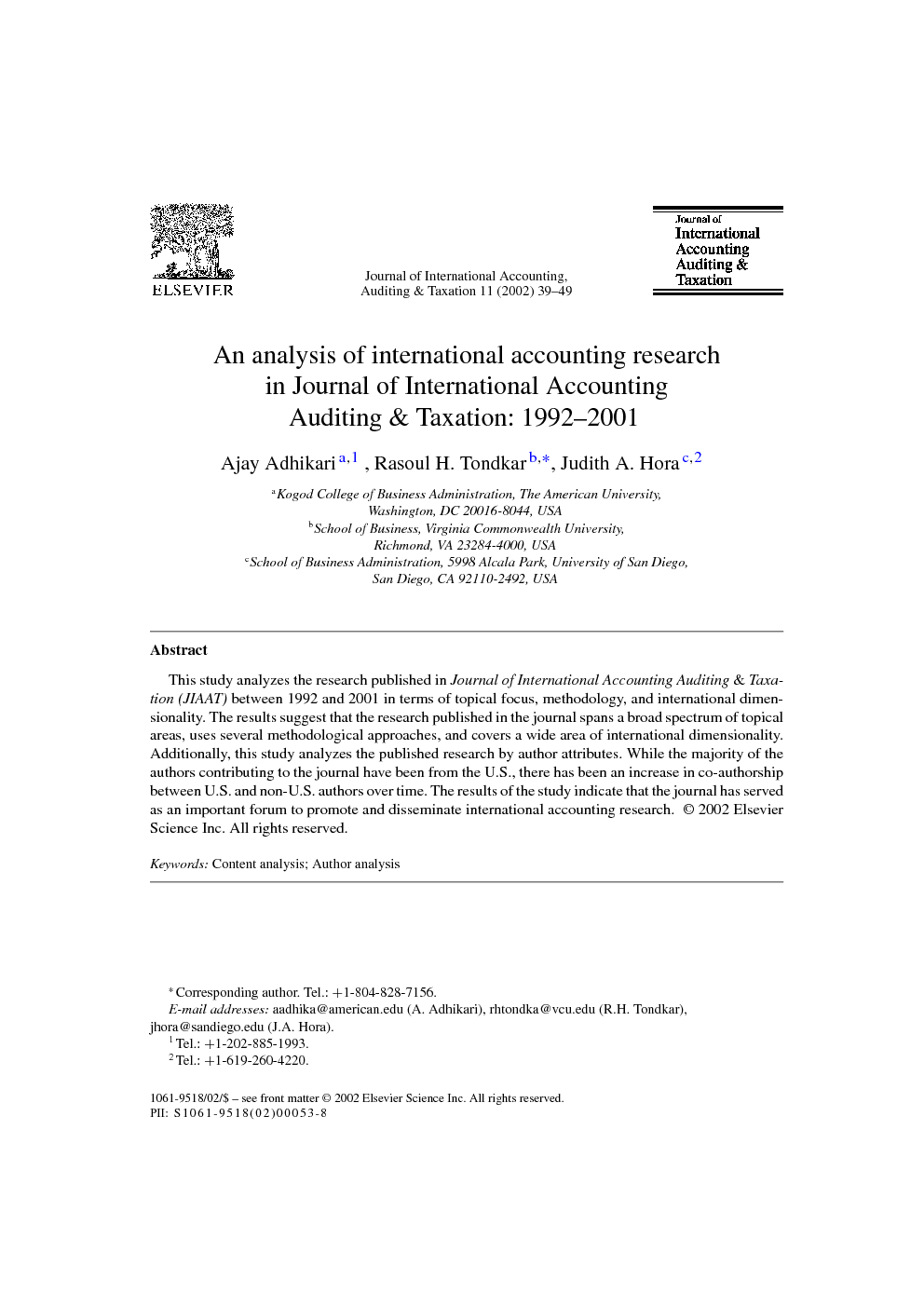 This study analyzes the research published in Journal of International Accounting Auditing & Taxation (JIAAT) between 1992 and 2001 in terms of topical focus, methodology, and international dimensionality. The results suggest that the research published in the journal spans a broad spectrum of topical areas, uses several methodological approaches, and covers a wide area of international dimensionality. Additionally, this study analyzes the published research by author attributes. While the majority of the authors contributing to the journal have been from the U.S., there has been an increase in co-authorship between U.S. and non-U.S. authors over time. The results of the study indicate that the journal has served as an important forum to promote and disseminate international accounting research.

Due to increase in international trade and the globalization of capital markets in the last two decades, both academics and practitioners have faced many new challenges and problems. Differences in the areas of financial accounting and reporting, auditing, and taxation around the world have, among other things, presented problems in the interpretation, analysis, and comparison of the performance and financial condition of companies from different countries. These problems have provided new research opportunities for academics who are trained to conduct research in the area of international accounting. In order to make the type of research undertaken by academics most relevant to the challenges faced by practitioners, there was a need for a forum that would bridge the gap between academic research and practitioners’ needs. As a result, the Journal of International Accounting Auditing & Taxation (JIAAT), was established as such a forum in 1992. The stated mission of this journal is “to bridge the gap between academic researchers and practitioners by publishing articles that are relevant to both audiences.” JIAAT is a refereed, scholarly journal published semiannually by Pergamon Press. Since its establishment, 10 volumes of the journal have been published containing 135 articles, by 239 authors from 22 different countries. The published articles have discussed topics such as: accounting practices in different countries; measurement and reporting effects of these practices on business decisions; essays on world affairs which affect accounting practices; and, applied and empirical research findings that are of interest to both academics and practitioners. The founding editor of JIAAT was Dr. James A. Schweikart, then at University of Richmond. JIAAT is currently co-edited by Drs. Kathleen E. Sinning and Hans J. Dykxhoorn at Western Michigan University. The current editorial review board consists of 38 individuals representing 37 universities from five countries. The purpose of this article is to analyze the type of international accounting articles published in JIAAT since its establishment in 1992 in terms of topical focus (e.g., financial accounting and reporting, tax, audit, managerial, etc.) dimensionality (e.g., country studies, comparative studies, capital markets studies, studies dealing with specific issues such as segment reporting, transfer pricing, etc.), and methodology utilized (e.g., descriptive, empirical, survey studies, etc.). Additionally, the article analyzes the attributes of authors of the published articles in terms of institutional affiliation (doctoral granting versus non-doctoral granting), single versus co-authorship, U.S. versus non-U.S. authors, co-authorship between U.S. and non-U.S. authors, and rank of the authors at the time of publication. Furthermore, for purposes of analyses, each issue of the journal is categorized into one of two periods. The first 5 years of the journal (1992–1996, containing Vols. 1–5) represents the first period and the second 5 years (1997–2001, containing Vols. 6–10) represents the second period. The types of published articles as well as the attributes of the authors are analyzed for each period in order to discern any shift in research focus of the published articles and change in the attributes of authors. This article is organized as follows. The first section analyzes and discusses the published articles in JIAAT since its establishment in terms of topics, dimension, and the methodology utilized. The second section analyzes and discusses the attributes of published articles in terms of authorship, geographical location, and rank. A summary is provided in the last section of the paper.

The globalization of capital markets, regional and international co-operation among countries, and an increase in international trade over the last two decades, have provided new avenues for companies and investors to pursue business and investment opportunities around the world. With these opportunities, however, new challenges and problems have emerged. One of the problems encountered emanates from accounting diversity, i.e., differences in financial reporting, auditing, and taxation practices among countries. Accounting diversity, among other things, presents problems in the interpretation, analysis, and comparison of the performance and financial condition of companies from different countries. These challenges have also provided new opportunities for researchers in the area of international accounting. As a result, several international accounting journals have been established over the last two decades. One such journal is the JIAAT, which was established in 1992. The stated mission of this journal is “to bridge the gap between academic researchers and practitioners by publishing articles that are relevant to both audiences.” Since its establishment, 10 volumes of the journal have been published containing 135 articles, by 239 authors from 22 different countries. This study analyzed the type of international accounting articles published in JIAAT since its establishment in 1992 in terms of topical focus, dimensionality, and methodology utilized. The study also analyzed the attributes of authors of the published articles in terms of geographical location, institutional affiliation, and rank. This analysis is conducted for the first 5 years and the second 5 years of the journal to identify any shift in research focus of the published articles and the attributes of authors. With regards to the topic of the published articles, the results indicate that financial reporting papers accounted for over half of the total published articles in both periods. Papers dealing with auditing and tax issues were significant, and there was a marked increase in the relative frequency of published papers dealing with tax issues in the second period over the first period. This analysis reveals that the journal, besides promoting and contributing to the traditional research stream in international financial reporting, has taken a leadership role in encouraging research in the areas of international tax and auditing. In relation to the dimension of the published papers, the results indicate that papers focusing on international business studies accounted for the highest frequency of published papers and remained stable over the two periods. The importance of research in this category reflects the enormous expansion of international trade and business that has accompanied the internationalization of capital markets. A comparison between the two periods revealed that there was a decrease in the relative frequency of published papers focusing on country studies while papers dealing with comparative studies increased in the second period. The findings on the methodology of published papers show that there was a significant decrease in descriptive/survey type studies and a concomitant increase in empirical studies in the second period. The marked increase in relative frequency of published empirical studies is reflective of a general trend in international accounting research facilitated by the availability of international data sets (e.g., Global Vantage, Data Stream, I/B/E/S International, etc.) and an increasing emphasis on scientific research designs. In relation to the attributes of authors, the results indicate that the majority of authors are from the U.S. followed by Canadian and Australian authors. The results also indicate that there has been an increase in co-authorship between the U.S. and non-U.S. authors in the second period compared to the first period. Advances in communication technology have enhanced collaborative efforts between U.S. and non-U.S. authors, which also points to a trend toward a more multi-country perspective in international accounting research. In regards to the rank of authors of published articles, the results reveal that all ranks of academics have contributed to the journal, while there was an increase in the relative frequency of contribution to the journal by associate professors in the second period. Finally, a slight decrease in contribution by authors from PhD granting institutions was offset by a slight increase by authors from non-PhD granting institutions in the second period. The latter increase is a positive trend, indicating recognition and emphasis in international accounting research by authors from non-PhD granting institutions.