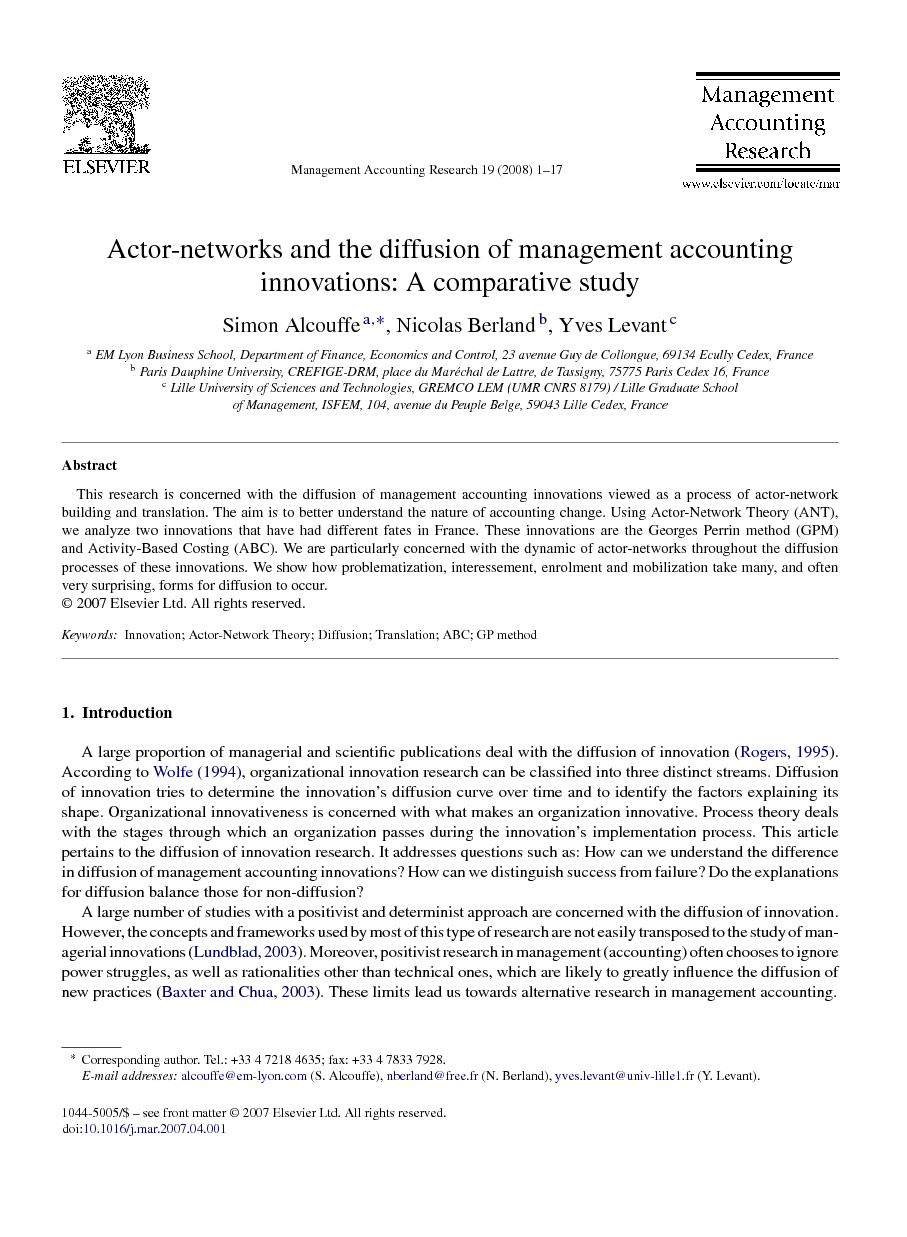 This research is concerned with the diffusion of management accounting innovations viewed as a process of actor-network building and translation. The aim is to better understand the nature of accounting change. Using Actor-Network Theory (ANT), we analyze two innovations that have had different fates in France. These innovations are the Georges Perrin method (GPM) and Activity-Based Costing (ABC). We are particularly concerned with the dynamic of actor-networks throughout the diffusion processes of these innovations. We show how problematization, interessement, enrolment and mobilization take many, and often very surprising, forms for diffusion to occur

A large proportion of managerial and scientific publications deal with the diffusion of innovation (Rogers, 1995). According to Wolfe (1994), organizational innovation research can be classified into three distinct streams. Diffusion of innovation tries to determine the innovation's diffusion curve over time and to identify the factors explaining its shape. Organizational innovativeness is concerned with what makes an organization innovative. Process theory deals with the stages through which an organization passes during the innovation's implementation process. This article pertains to the diffusion of innovation research. It addresses questions such as: How can we understand the difference in diffusion of management accounting innovations? How can we distinguish success from failure? Do the explanations for diffusion balance those for non-diffusion? A large number of studies with a positivist and determinist approach are concerned with the diffusion of innovation. However, the concepts and frameworks used by most of this type of research are not easily transposed to the study of managerial innovations (Lundblad, 2003). Moreover, positivist research in management (accounting) often chooses to ignore power struggles, as well as rationalities other than technical ones, which are likely to greatly influence the diffusion of new practices (Baxter and Chua, 2003). These limits lead us towards alternative research in management accounting. Baxter and Chua (2003) identify seven different research perspectives that lie outside the main stream. This article follows the line of “Latourian” research.1 This stream of research is concerned with the fabrication of management accounting technologies through the following of actor-networks. Unforeseeable interactions between human and non-human actors are central to this type of analysis. In this view, accounting innovations diffuse because they translate the changing and transitory interests of various groups of actors who are looking to maintain their position and influence within organizations and society. Actors use accounting innovations to manufacture “inscriptions” (i.e. figures and numbers which become “facts”, see Robson, 1992) and manipulate them to serve their interests. Following Actor-Network Theory (ANT), we take as an axiom that an innovation's technical characteristics are not sufficient to explain the “success” or “failure” of its diffusion (Latour, 1987, p. 258). Moreover, the notions of success and failure are problematic within this epistemological stance. Within the diffusion process, we are particularly concerned with the dynamic and interactions of actor-networks, i.e. the arguments network members decide (or not) to use to promote the innovation and successfully interest and enroll other actors. The diffusion of the Georges Perrin Method (GPM) and Activity-Based Costing (ABC) in France provide two illustrative stories for comparison. The remainder of this article is organized as follows. Section 2 presents the main concepts of ANT and sets out a review of management accounting research using this framework. Sections 3 and 4 describe the dynamic of actor-networks in the diffusion of GPM and ABC. A discussion of these two stories follows in Section