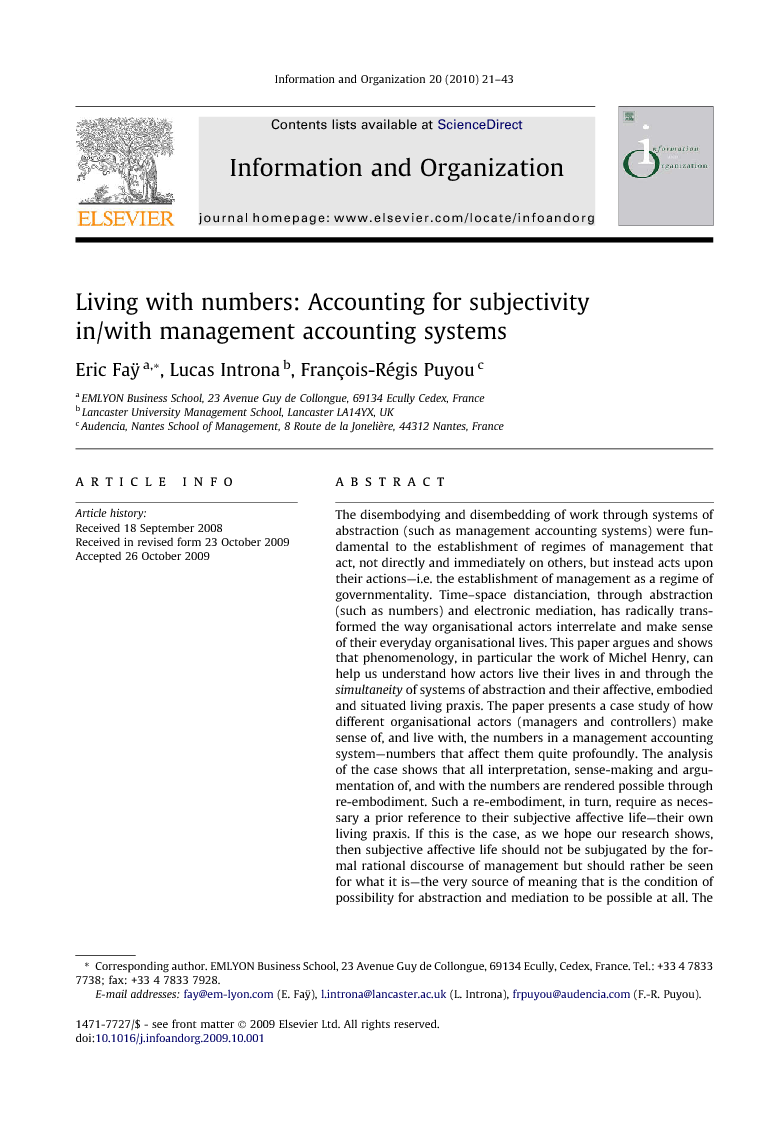 The disembodying and disembedding of work through systems of abstraction (such as management accounting systems) were fundamental to the establishment of regimes of management that act, not directly and immediately on others, but instead acts upon their actions—i.e. the establishment of management as a regime of governmentality. Time–space distanciation, through abstraction (such as numbers) and electronic mediation, has radically transformed the way organisational actors interrelate and make sense of their everyday organisational lives. This paper argues and shows that phenomenology, in particular the work of Michel Henry, can help us understand how actors live their lives in and through the simultaneity of systems of abstraction and their affective, embodied and situated living praxis. The paper presents a case study of how different organisational actors (managers and controllers) make sense of, and live with, the numbers in a management accounting system—numbers that affect them quite profoundly. The analysis of the case shows that all interpretation, sense-making and argumentation of, and with the numbers are rendered possible through re-embodiment. Such a re-embodiment, in turn, require as necessary a prior reference to their subjective affective life—their own living praxis. If this is the case, as we hope our research shows, then subjective affective life should not be subjugated by the formal rational discourse of management but should rather be seen for what it is—the very source of meaning that is the condition of possibility for abstraction and mediation to be possible at all. The paper concludes with some implications of Henry’s phenomenology of life for organisations and management research

It is widely acknowledged that the development and utilisation of management accounting systems (MAS) was fundamental to the emergence of the industrial socio-economic infrastructure (Fleischman and Tyson, 1993 and Hopwood, 1987). It is possible to argue that it is MAS’s ability to translate broad economic principles into directly actionable operational imperatives, which can direct and govern action, that locates MAS at the centre of managerial intentions. As a technology of control that renders action visible it constitutes what Foucault (1997) might call a regime of governmentality. As a regime of governmentality MAS constitutes “a mode of action that does not act directly and immediately on others. Instead, it acts upon the actions of others, and presupposes the freedom to act in one way or another” (Miller, 2001, 380). Through the mediation of MAS distant actions become visible and amenable to intervention. As a technology of governance the numbers in MAS are always already imbued with social significance as they render visible strategic and operational intentions and actions. As Miller argues: The calculative practices of [management] accounting are always intrinsically linked to a particular strategic or programmatic ambition. Accounting practices are endowed with a significance that goes beyond the task for which they are deployed. … it is through them that accounting comes to appear essential to the government of social and economic life. Attention is thus drawn to the reciprocal relations between accountancy and the social relations it forms and seeks to manage. The calculative practices of accounting are intrinsically and irredeemably social. If this is true, as it is so self-evidently for most managers, then MAS are at the very centre of governing the intentions, aspirations, beliefs, etc. of many if not most organisational actors. Given this organisational and social significance of MAS we would suggest that the question of the subjective engagement with numbers, as rendered possible by MAS, is fundamental to our understanding of how these systems actually govern organisational life, especially, we will argue, with regard to subjectivity. Not only with regard to the social construction of subjectivity as has been done for example by Miller and O’Leary, 1987 and Hopwood, 1987, but more importantly, with regards to subjective life itself through the affective experience of being confronted with a ‘numbered’ world. This is the focus of our paper. We want to suggest that through information technology it has become possible for MAS to be deployed to govern the most intimate minutia of daily organisational life. Through an ever-increasing process of abstraction this has led to the progressive disembedding of the local singular and situated subject to a more globalised governed subject or agent. However, ultimately decisions and actions have to return to the domain of the local singular and situated subject for them to be individually and socially significant. It is in this regard that we believe phenomenology can and should play a role. We want to propose that through phenomenology, in particular the work of Husserl, 1936, Henry, 1963, Henry, 1976, Henry, 1985, Henry, 1987, Henry, 1999, Henry, 2003 and Henry, 2004, we can give an account of the consequences of the ‘mathematization’ of organisational life—and in particular the way individuals deal subjectively with this ‘mathematization’ in everyday organisational life as lived. We will show how phenomenology, specifically the work of Michel Henry, can help us understand how actors live their lives in and through the simultaneity of systems of abstraction and their affective, embodied and situated living praxis. In order to do this we will structure the paper as follows. In the first section we set out the theoretical landscape within which our work is located. We draw on the work of social theorist Giddens, 1984 and Giddens, 1990, specifically his notion of time–space distanciation. We argue that this is a primary phenomenon for organisation studies and indicate how different authors have taken it up in their work as well as locate our work relative to it. In the second section we elaborate phenomenology, in particular the work of Husserl and Henry, as our theoretical horizon. We suggest that ultimately all disembedding (through time–space distanciation and abstraction) require, as an inescapable necessity, individuals to re-embed, and even re-embody, abstract mathematical representations in order for these to be encountered as information—information as inward forming in the sense proposed by Boland, 1984, Boland, 1987 and Boland, 1993 and others (Introna, 1997, Weick, 1988, Weick, 1993 and Weick, 1995). To support this argument we will present, in section three, the Omega case study of the implementation of a MAS. In reviewing this case study we will argue that abstract numbers are always perceived affectively as a supplementary and distinct mode of perception to vision and representation. This review of the Omega case will be followed, in section four, with a discussion in which we clearly show how the affectedness of the individual managers condition their singular experience of abstract numbers in order for the MAS to have social significance, as argued by Miller, 2001 and Jones and Dugdale, 2001. In the final section we conclude that our contemporary understanding of the organisational reality of work—as increasingly mirrored in abstract systems of representations (particularly IT mediated representations)—needs to take account of the insights provided by Henry’s phenomenology.

If one accepts Henry’s phenomenology as a legitimate account of the experience of life in organisations then one might ask what the implications would be if one would take such an approach seriously? There are many but we will only highlight a few here. In terms of information systems we would suggest that accepting this approach might call for a shift from the hegemony of rationality (based on abstract numbers) to a situation in which reasonableness based on teleology of people life is given equal legitimacy—to acknowledge that the real value of knowledge derives from living praxis rather than from abstract codifications. This is not to say that abstract knowledge and rationality is wrong or illegitimate. It is rather to suggest that it is its hegemonic status that needs to be questioned. This is, however, not necessarily a humanistic call or endeavour, although it might be construed this way. It is rather a suggestion that the denial of the power of living praxis will in the long run undermine the vital energy of life itself and lead to a systematic condition of malaise—which might manifest itself as stress or anxiety or even in the nihilistic excesses of hyper capitalism. One might suggest that evidence of this is already appearing, for example, in the rapidly increasing levels of absenteeism in many contemporary organisations and in the nihilistic excess of the recent credit crunch. More specifically, if we accept Henry’s account then we ought to design organising processes in such a way as to create opportunities for living praxis to be legitimately shared. One would certainly advocate for more regular face-to-face meetings, or “facework rituals” as Giddens refers to it. However with Henry we suggest that it is not just more meetings which are needed, but meetings where the legitimacy of reasonableness is acknowledged, and where forms of dialogue that allows for the sharing of feelings and concerns are respected and encouraged. Having said this we must emphasise again that we are not calling for sentimentalism—which is associated with superficiality and instrumentalism in equal measure—but for the possibility of discernment in the light of one’s affective life and its teleology. This call is grounded in Henry’s phenomenology and its decisive reversal of traditional western thought: “It is not consciousness (derived from objective knowledge) which determines life, it is life which determines consciousness” (1976: 401). This is, we would suggest, the only way to relate to the reality of everyday organisational life, i.e. to be realistic. Indeed we would claim that when knowledge is not merely derived from general frameworks but from lived, incarnated experience, unexpected innovation may indeed occur. As Henry asserts: “one should not start from what people say, imagine, … one should start from really active people and from their real vital process” (1976: 403). Thus, we would suggest, with Henry, that realism is not first and foremostly about or in the ‘facts’ but in the dynamism of life itself. If we really take this seriously then the design of ‘information systems’ that indeed ‘inform’ would be very different. The current emphasis on analysis and method might be replaced by an emphasis on practices as practiced. Even when information or knowledge by necessity needs to be abstract (through ERP or MAS systems for example) and our interactions meditated through abstractions (through e-mail for example), information, to be powerful, needs not only to be re-embedded but also, in a radical way, re-embodied (in the affective flesh as it were). For us as researchers Henry’s phenomenology also has many implications. First we might say that we need not be caught in the debate between the positivistic approach (based on lifeless abstract representations) and a relativistic interpretative approach which is often critiqued for providing “just another interpretation”. As researchers we can ground our (participant) observations in the teleology of our life, in subjectivity and not subjectivism. This offers us a critical standpoint, which is different from the Habermassian logic of argument. We can do research, in an axiologic starting point, from the real of life (which manifests itself through people suffering, caring, being excited, elated, bored, and so forth). This is the ongoing challenge for us as researchers—i.e. to make our research real, or at least speak of the real. With this work we are able to legitimise what has become illegitimate through the massive expansion of scientific management and governmental practices. For us it is a radical transformation from the pervasive abstraction and distanciation of work (brought about by information and communication technology) to the meaning-giving source of work, which is affective life itself. We would suggest that organisation studies (and managers) would make a fatal mistake to ignore the work of Henry.