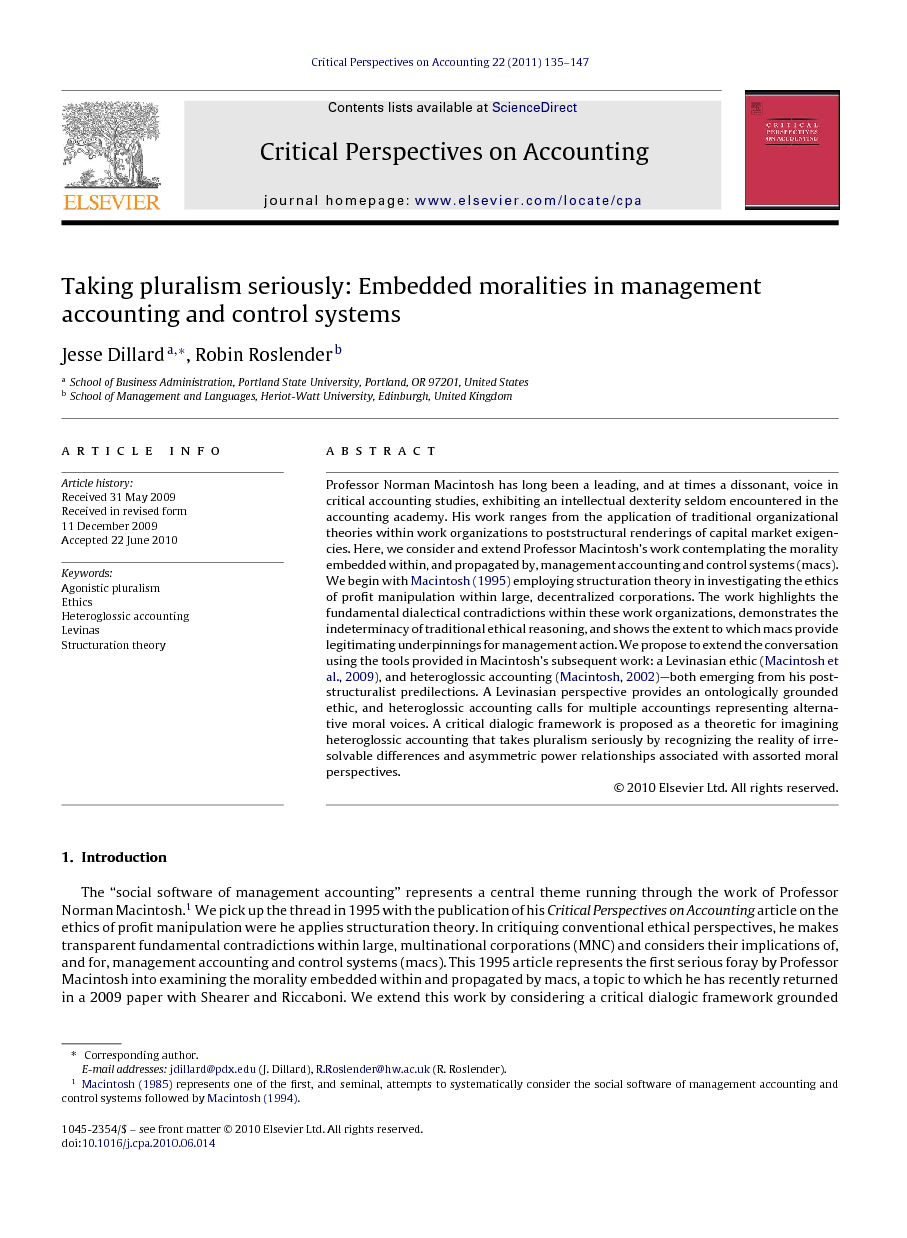 Professor Norman Macintosh has long been a leading, and at times a dissonant, voice in critical accounting studies, exhibiting an intellectual dexterity seldom encountered in the accounting academy. His work ranges from the application of traditional organizational theories within work organizations to poststructural renderings of capital market exigencies. Here, we consider and extend Professor Macintosh's work contemplating the morality embedded within, and propagated by, management accounting and control systems (macs). We begin with Macintosh (1995) employing structuration theory in investigating the ethics of profit manipulation within large, decentralized corporations. The work highlights the fundamental dialectical contradictions within these work organizations, demonstrates the indeterminacy of traditional ethical reasoning, and shows the extent to which macs provide legitimating underpinnings for management action. We propose to extend the conversation using the tools provided in Macintosh's subsequent work: a Levinasian ethic (Macintosh et al., 2009), and heteroglossic accounting (Macintosh, 2002)—both emerging from his poststructuralist predilections. A Levinasian perspective provides an ontologically grounded ethic, and heteroglossic accounting calls for multiple accountings representing alternative moral voices. A critical dialogic framework is proposed as a theoretic for imagining heteroglossic accounting that takes pluralism seriously by recognizing the reality of irresolvable differences and asymmetric power relationships associated with assorted moral perspectives.

The “social software of management accounting” represents a central theme running through the work of Professor Norman Macintosh.1 We pick up the thread in 1995 with the publication of his Critical Perspectives on Accounting article on the ethics of profit manipulation were he applies structuration theory. In critiquing conventional ethical perspectives, he makes transparent fundamental contradictions within large, multinational corporations (MNC) and considers their implications of, and for, management accounting and control systems (macs). This 1995 article represents the first serious foray by Professor Macintosh into examining the morality embedded within and propagated by macs, a topic to which he has recently returned in a 2009 paper with Shearer and Riccaboni. We extend this work by considering a critical dialogic framework grounded in agonistic democracy as a social theoretic for imagining and implementing heteroglossic accountings, an approach also introduced into the accounting literature by Macintosh (2002). Professor Macintosh's intellectual journey evidences a research program driven by an intellectual curiosity that moves through the nooks and crannies of social science, a journey that always seems to use the various theories and tools to meaningfully frame relevant accounting or accountability issues. What began as endeavors to understand the work behavior of organizations and those that populate them using rather traditional theoretical constructs and methodologies (see Daft and Macintosh, 1978, Daft and Macintosh, 1981, Daft and Macintosh, 1984, Macintosh and Daft, 1978 and Macintosh and Daft, 1987) grounded in normal science has thereafter evolved through many iterations into a poststructuralist critique grounded in linguistic analysis (Hopper and Macintosh, 1993, Macintosh and Shearer, 2000, Macintosh et al., 2000 and Macintosh et al., 2009) with the logical consequence pointing toward the fabrication of heteroglossic accounting (Macintosh, 2002 and Macintosh and Baker, 2002). Macintosh's work can be broadly characterized as constructing a critical social science for accounting as opposed to a critical social science of accounting ( Dillard, 1991 and Roslender, 1992). The varied paths taken suggest an intellectual dexterity seldom seen in academic accounting and reflect a journey commandeering new and at times very different vehicles. Such is, in our opinion, a mark of an inquiring and evolving scholar. Given that we begin with Macintosh (1995), our discussion initially focuses on ethics, structuration theory and profit manipulation as they fit within a project that addresses issues relating to the distortion of understanding,2 resulting in asymmetries of knowings that tend to privilege one group over another, with, Macintosh (1995) concludes, no legitimate warrants for doing so. Here we consider work specifically located within the critical accounting project and employing theory and thinking from what some might call a critical or neo-Marxist genre. If we might venture an opinion, the work from whence we begin is located just prior to, or within the transition phase of, Macintosh's thinking taking a decidedly linguistic (poststructural) turn. Macintosh (1995) may represent one of his last purely “modernist” renderings. Though we might equally suggest that the treatment of ethics in quasi-relativistic terms portends the inclination toward more linguistic proclivities. We believe the ideas developed and the theories considered have purchase in framing accounting questions and understanding the practice of accounting within organizations by providing a platform for taking pluralism seriously within the context of recognized unequal power relationships. The conversation proceeds as follows. In the next section, we consider the morality embedded in, and propagated by, macs as articulated by Macintosh in his analysis of extant ethical and accounting codes. Following the introduction, conventional arguments concerning the propriety of profit manipulation are evaluated in light of traditional ethical reasoning. Next, a Levinasian ethic (Macintosh et al., 2009) is applied. The fourth section recognizes the promise of heteroglossic accounting as a means for addressing the differing perspectives and information needs of alternative constituencies. Next, the possibilities of heteroglossic accounting are explored within the context of a critical dialogic framework (Brown, 2009). Recognizing the iterative and ongoing nature of the dialogical conversation, we pause this initial conversation after considering the limitations and reviewing the possibilities of heteroglossic accounting and agonistic democracy.