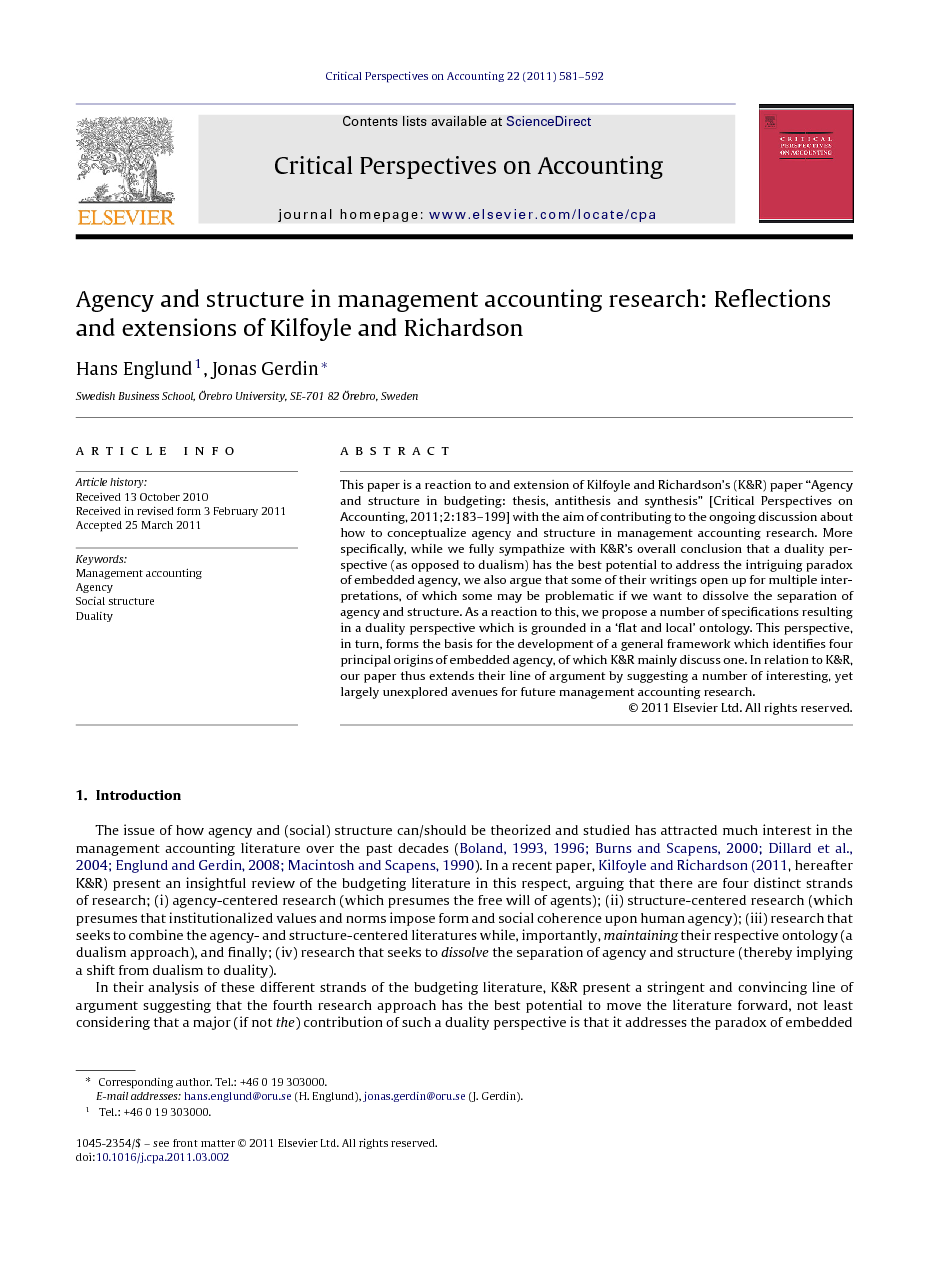 This paper is a reaction to and extension of Kilfoyle and Richardson's (K&R) paper “Agency and structure in budgeting: thesis, antithesis and synthesis” [Critical Perspectives on Accounting, 2011;2:183–199] with the aim of contributing to the ongoing discussion about how to conceptualize agency and structure in management accounting research. More specifically, while we fully sympathize with K&R's overall conclusion that a duality perspective (as opposed to dualism) has the best potential to address the intriguing paradox of embedded agency, we also argue that some of their writings open up for multiple interpretations, of which some may be problematic if we want to dissolve the separation of agency and structure. As a reaction to this, we propose a number of specifications resulting in a duality perspective which is grounded in a ‘flat and local’ ontology. This perspective, in turn, forms the basis for the development of a general framework which identifies four principal origins of embedded agency, of which K&R mainly discuss one. In relation to K&R, our paper thus extends their line of argument by suggesting a number of interesting, yet largely unexplored avenues for future management accounting research.

The issue of how agency and (social) structure can/should be theorized and studied has attracted much interest in the management accounting literature over the past decades (Boland, 1993, Boland, 1996, Burns and Scapens, 2000, Dillard et al., 2004, Englund and Gerdin, 2008 and Macintosh and Scapens, 1990). In a recent paper, Kilfoyle and Richardson (2011, hereafter K&R) present an insightful review of the budgeting literature in this respect, arguing that there are four distinct strands of research; (i) agency-centered research (which presumes the free will of agents); (ii) structure-centered research (which presumes that institutionalized values and norms impose form and social coherence upon human agency); (iii) research that seeks to combine the agency- and structure-centered literatures while, importantly, maintaining their respective ontology (a dualism approach), and finally; (iv) research that seeks to dissolve the separation of agency and structure (thereby implying a shift from dualism to duality). In their analysis of these different strands of the budgeting literature, K&R present a stringent and convincing line of argument suggesting that the fourth research approach has the best potential to move the literature forward, not least considering that a major (if not the) contribution of such a duality perspective is that it addresses the paradox of embedded agency. That is, unlike both agency-centered and structure-centered approaches, it can help us understand how agents may come to reflect on and change social structure (and practices) when their intentions, interpretations and actions are all largely conditioned by this very structure. Interestingly, K&R also identify and discuss a number of mechanisms that enhance our understanding of how such embedded agency may come about. For example, they highlight the role of institutional entrepreneurs who may skillfully exploit contradictions inherent in structures. They also propose that local variations in practices may first become ‘proto-institutions’ and later expand into the broader institutional environment. However, while we certainly appreciate their ideas of how to understand embedded agency, we see a large potential for systematization and extension of the points made in their paper, and also think that several issues would benefit from further discussion and reflection. More precisely, we think that their ideas about how embedded agency may come about are somewhat scattered (which is perfectly understandable since their paper did not seek to present a comprehensive and coherent framework). We also find that some of their discussions about the theoretical foundation of embedded agency – i.e. the notion of ‘duality of structure’ – leave the reader with a feeling of equivocality as to what this core notion means and implies. On this basis, the purpose of this paper is twofold, namely, to reflect upon some of their reasoning about the duality of structure, and based on these reflections, extend their ideas by proposing a somewhat different and more comprehensive framework for theorizing how embedded agents may come to change (management accounting) practices across time. The structure of the paper is as follows. In the next section, we discuss some of K&R's writings concerning the key notions of social structure and duality of structure, respectively. After that, we present our framework which elaborates on, synthesizes and extends K&R's ideas of how embedded agency may come about. In the final sections, we summarize our findings and propose a number of implications and avenues for future management accounting research, before rounding off with the conclusions.

In this paper, we have in a critical, yet sympathetic manner reflected on and extended K&R's argument that a duality perspective (as compared to a dualistic one) has great advantages for understanding management accounting change processes. Overall, we suggest that if we are to understand better how embedded actors can envision new management accounting practices when their interests, intentions, and interpretations are all largely conditioned by the prevailing structural arrangement, a flat and local duality perspective should be adopted. Such a perspective is highly promising as it opens up for a variety of interesting, yet largely unexplored origins of management accounting change.