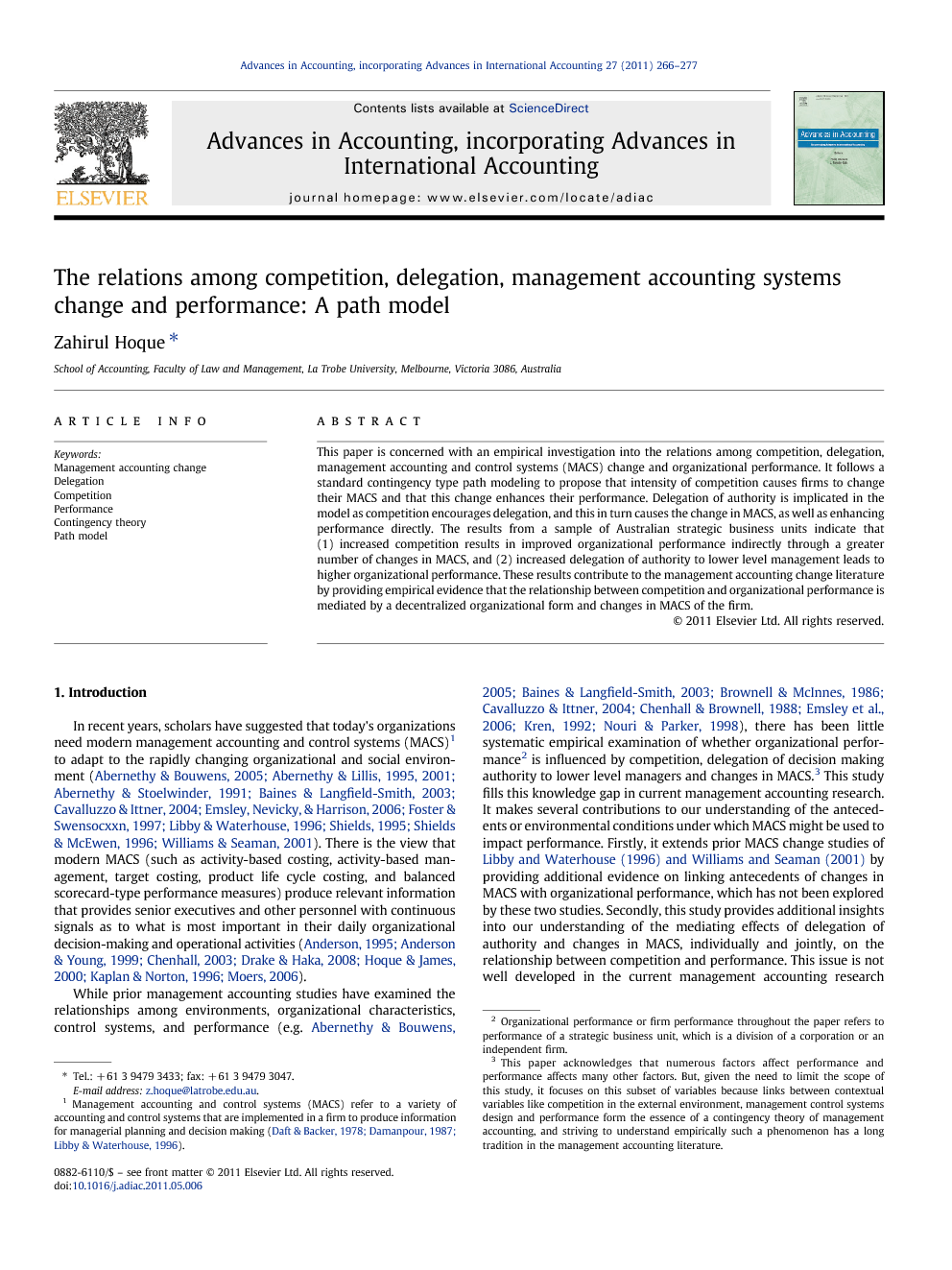 In recent years, scholars have suggested that today's organizations need modern management accounting and control systems (MACS)1 to adapt to the rapidly changing organizational and social environment (Abernethy and Bouwens, 2005, Abernethy and Lillis, 1995, Abernethy and Lillis, 2001, Abernethy and Stoelwinder, 1991, Baines and Langfield-Smith, 2003, Cavalluzzo and Ittner, 2004, Emsley et al., 2006, Foster and Swenson, 1997, Libby and Waterhouse, 1996, Shields, 1995, Shields and McEwen, 1996 and Williams and Seaman, 2001). There is the view that modern MACS (such as activity-based costing, activity-based management, target costing, product life cycle costing, and balanced scorecard-type performance measures) produce relevant information that provides senior executives and other personnel with continuous signals as to what is most important in their daily organizational decision-making and operational activities (Anderson, 1995, Anderson and Young, 1999, Chenhall, 2003, Drake and Haka, 2008, Hoque and James, 2000, Kaplan and Norton, 1996 and Moers, 2006). While prior management accounting studies have examined the relationships among environments, organizational characteristics, control systems, and performance (e.g. Abernethy and Bouwens, 2005, Baines and Langfield-Smith, 2003, Brownell and McInnes, 1986, Cavalluzzo and Ittner, 2004, Chenhall and Brownell, 1988, Emsley et al., 2006, Kren, 1992 and Nouri and Parker, 1998), there has been little systematic empirical examination of whether organizational performance2 is influenced by competition, delegation of decision making authority to lower level managers and changes in MACS.3 This study fills this knowledge gap in current management accounting research. It makes several contributions to our understanding of the antecedents or environmental conditions under which MACS might be used to impact performance. Firstly, it extends prior MACS change studies of Libby and Waterhouse, 1996 and Williams and Seaman, 2001 by providing additional evidence on linking antecedents of changes in MACS with organizational performance, which has not been explored by these two studies. Secondly, this study provides additional insights into our understanding of the mediating effects of delegation of authority and changes in MACS, individually and jointly, on the relationship between competition and performance. This issue is not well developed in the current management accounting research literature. Finally, the study's use of a path approach in theorizing the research problems facilitates the generation of valuable insights into the subject phenomenon. The next section presents a literature review and develops the hypotheses. Section 3 describes the research method. Next, Section 4 presents the research results. The final section offers conclusions and outlines the limitations of the study.