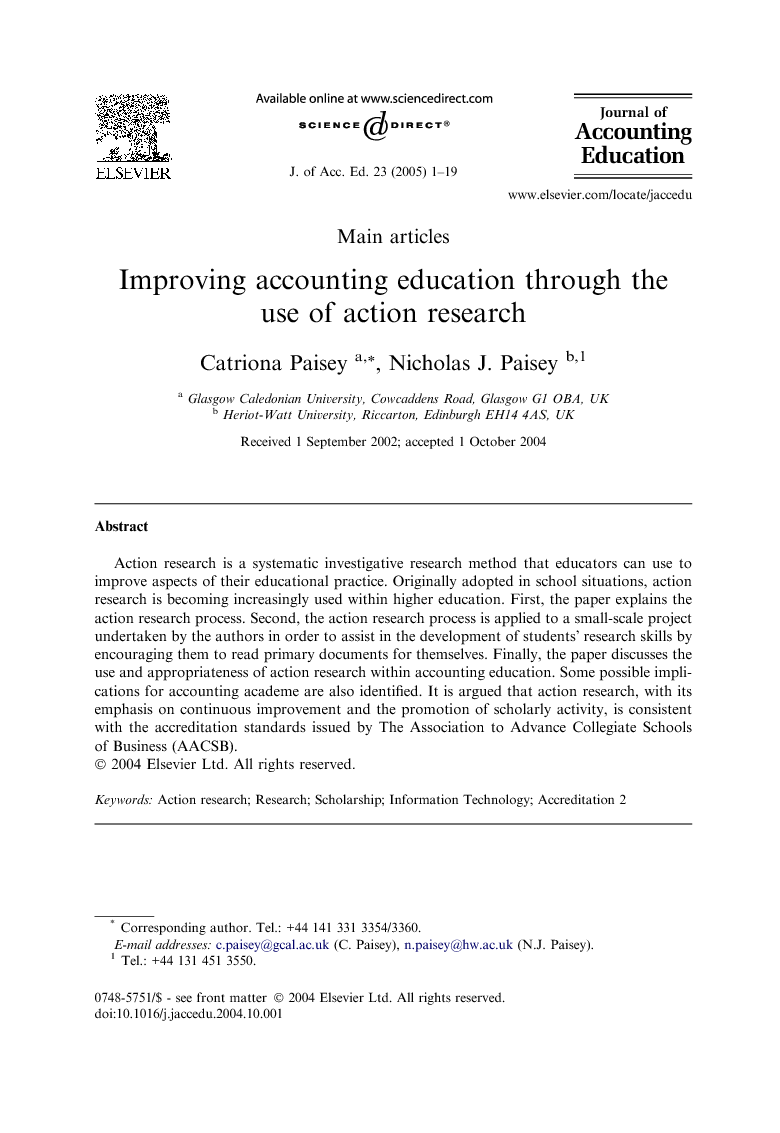 Action research is a systematic investigative research method that educators can use to improve aspects of their educational practice. Originally adopted in school situations, action research is becoming increasingly used within higher education. First, the paper explains the action research process. Second, the action research process is applied to a small-scale project undertaken by the authors in order to assist in the development of students’ research skills by encouraging them to read primary documents for themselves. Finally, the paper discusses the use and appropriateness of action research within accounting education. Some possible implications for accounting academe are also identified. It is argued that action research, with its emphasis on continuous improvement and the promotion of scholarly activity, is consistent with the accreditation standards issued by The Association to Advance Collegiate Schools of Business (AACSB).

Action research is a systematic investigative research method that can help improve aspects of educational practice (Hand, Sanderson, & O’Neil, 1996). Continuous improvement and the promotion of scholarly activity among accounting faculty have recently been emphasised by The Association to Advance Collegiate Schools of Business (AACSB) (AACSB, 2004). The AACSB stresses that accreditation seeks to improve accounting education and that the accreditation process “intends to promote the development of accounting education programs of high quality and to encourage innovation and continual improvement” (AACSB, 2004, p. 3). With its focus on the improvement of educational practice, action research can be viewed as consistent with how the AACSB would like its member schools to approach continuous improvement. Action research typically incorporates five stages, as elaborated by Bassey (1998) and Hand (2001). These stages are depicted in Fig. 1.First, the enquiry must be defined by identifying the ’problem’ to be addressed and a research question should be framed. Problem identification is dependent upon the beliefs of the teachers involved. What is perceived as a problem to one teacher may not be so perceived by another. It is therefore important for users of action research to briefly outline the educational beliefs that inspired their projects. Second, the current educational situation should be described. This involves collecting data and reflecting on that data in order to determine how change might be effected. Research into educational topics, such as new teaching methods, may be conducted in order to inform the reflection. Third, the changes selected following the period of data gathering, research, and reflection are implemented. Fourth, implemented changes should be monitored and evaluated. Action research can be evaluated using a variety of means, including keeping notes of meetings, staff discussions, lecturers’ and students’ reflections on the educational experience, observations, keeping diaries, interviews, and questionnaires (Hand, 2001). Fifth, the changes that have been implemented should be reviewed and reflected upon. This extends the essentially fact-finding nature of step four by encouraging the action researcher to engage directly with the findings. Step five effectively completes the first cycle of research. Researchers refer to the cyclical nature of action research (e.g. Zuber-Skerritt, 1992) whereby the experiences gained from the first cycle inform a second cycle if it is thought that further improvement to the educational experience is possible. Action research has been advocated as a research method particularly suited to classroom inquiry where time, cost, or the small-scale nature of an investigation might render other methods unsuitable and unwieldy (Hand, 2001). While improving student learning is a laudable aim (Rebele, 1999), action research is not always recognised as a respectable research method, with its critics arguing that it is essentially about good teaching rather than research (McNiff, 1988). Nonetheless, there is a growing usage of action research. Originally adopted in school situations, there are now examples of usage within higher education (see, for example, Aspland and Brooker, 1998, Schratz, 1992 and Watters et al., 1998). Advocates of action research argue that it is a worthwhile research method because it aims to provide a systematic means of improving education, it is critical and reflective, and it emphasises the centrality of the practitioner.2 When teachers are critical and reflective of their own practice, they are attempting to understand it better, a process that arguably also makes them better able to understand their students. It teachers are to be regarded as professional, reflection seems to be crucial. Professions are characterised, in part, by their claims to theoretical knowledge and professionals are expected to make autonomous and independent judgements about the appropriateness of particular courses of action to actual situations (Carr & Kemmis, 1986). Action research can assist in this regard. The knowledge gained from engaging in action research rests on the assumption that teachers can learn and thereby become knowledgeable from their own experience, through observation, reflection, the formation of theories, and testing (Zuber-Skerritt, 1992). The aim of this paper is to apply the action research method as described above to a small-scale project undertaken by the authors. The paper is structured as follows. First, the application of action research within a specific teaching context is presented. Specifically, we show how action research has been used in a small-scale project designed to encourage students to become familiar with accounting standards by reading primary documents rather than textbook summaries. Second, the five stages of the action research project are described. Third, the results of a questionnaire administered to students are presented and discussed. Finally, the paper considers the potentiality of action research within accounting education and concludes on possible implications for accounting academe.

The teaching experience reported in this paper shows that action research can provide a systematic means of identifying a problem, collecting data about the current situation, reflecting upon it, implementing change and, finally, monitoring and evaluating that change. As such, it can be viewed as good practice, but action research can also enhance the professionalism of academic staff by contributing to the scholarly, and potentially also to the research, activities undertaken by those staff members. Scholarship and research are terms that are widely used but for which generally agreed definitions remain elusive. Research has increasingly come to be associated with publication. For example, the introduction of regular research assessment in the United Kingdom has focused attention on published research and research quality. While not all research is published, the assessment of published output has led to the impression that what really matters is securing a respectable publication outlet. Definitions of scholarship tend to emphasise the acquisition of knowledge for its own sake (Birch, 1988 and Shils, 1997) but there is also evidence that publication is increasingly being regarded as an element of scholarship as well as of research, with indicators such as the total number of publications and number of citations (Dwyer, 1994) and quality (Hasselback & Reinstein, 1995) being identified as markers of scholarship. In UK universities, a distinction appears to be emerging between research and scholarship with recognition that not all academic staff necessarily engage in research but that all should be scholarly. In the US, the accreditation standards issued by the AACSB state that learning by students as they prepare for accounting careers is strongly dependent on the quality of instruction offered to them. The standards continue that educators are responsible for ensuring instructional quality through “continuous improvement and innovation” (AACSB, 2004, p. 23). Accredited schools must demonstrate how faculty members and staff fulfil the functions of curriculum development, course development, and course delivery (Standard 34) and how the accounting faculty, as a whole, is actively engaged in making intellectual contributions in the areas of discipline-based scholarship, contributions to practice, and learning and pedagogical research (Standard 35). Action research can play a role here. For predominantly teaching staff, action research provides a method by which changes to teaching can be reviewed systematically utilising a recognised method. As such, it enables teachers to reflect in a professional manner on aspects of their teaching with a view to improving practice and, at least in part, satisfies the requirement to be scholarly as action research will involve literature searching and data acquisition and analysis. In this way, a bridge can be built with research. An activity that begins as scholarship can cross the boundary, however defined, to research provided that it is rigorous, peer reviewed and publically disseminated. If these conditions are met, then action research will be publishable and research respectability will follow. This will address the criticisms of action research and allow it to be viewed as a different, but no less worthy, form of research.