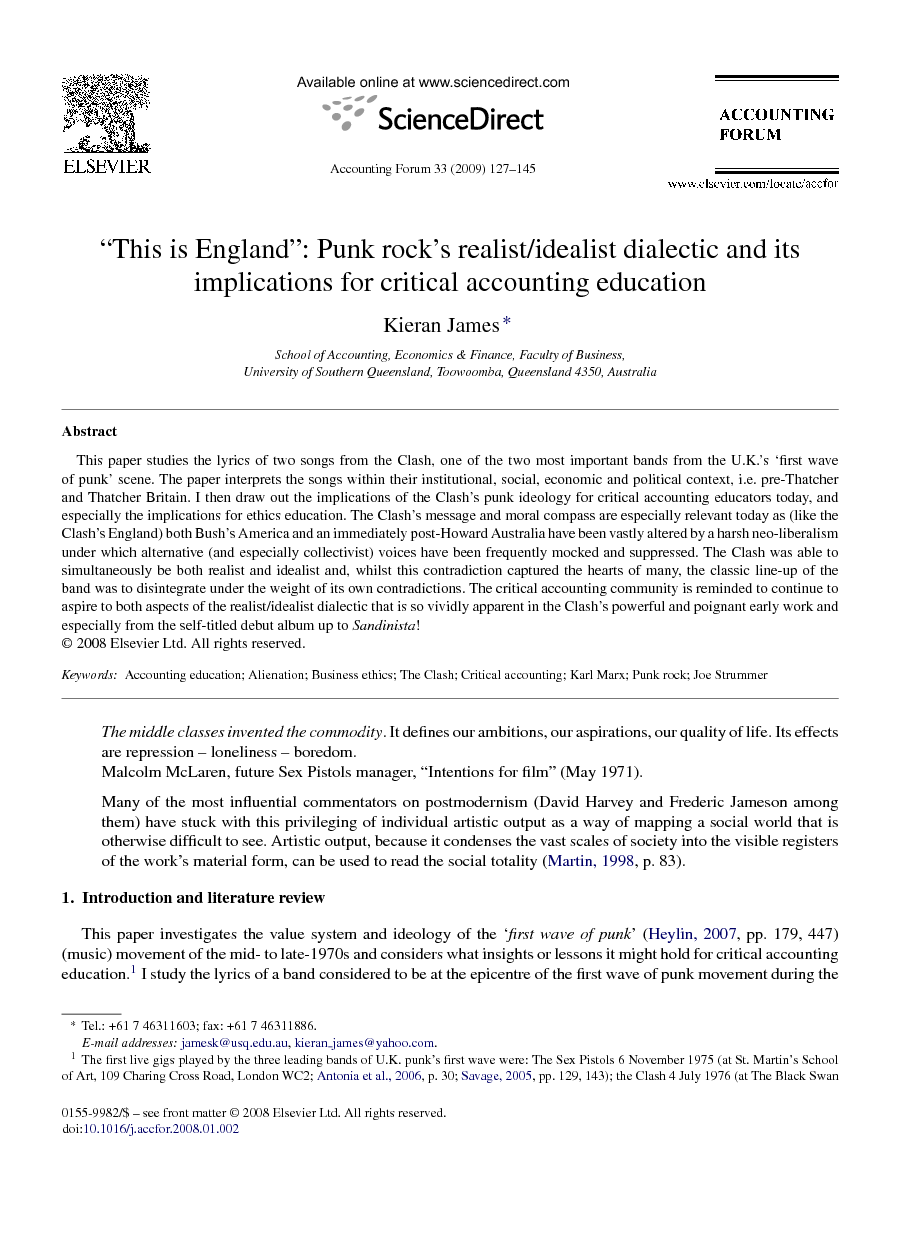 This paper studies the lyrics of two songs from the Clash, one of the two most important bands from the U.K.'s ‘first wave of punk’ scene. The paper interprets the songs within their institutional, social, economic and political context, i.e. pre-Thatcher and Thatcher Britain. I then draw out the implications of the Clash's punk ideology for critical accounting educators today, and especially the implications for ethics education. The Clash's message and moral compass are especially relevant today as (like the Clash's England) both Bush's America and an immediately post-Howard Australia have been vastly altered by a harsh neo-liberalism under which alternative (and especially collectivist) voices have been frequently mocked and suppressed. The Clash was able to simultaneously be both realist and idealist and, whilst this contradiction captured the hearts of many, the classic line-up of the band was to disintegrate under the weight of its own contradictions. The critical accounting community is reminded to continue to aspire to both aspects of the realist/idealist dialectic that is so vividly apparent in the Clash's powerful and poignant early work and especially from the self-titled debut album up to Sandinista!

This paper has studied the song lyrics of two important mid-period songs released by first wave of punk band the Clash. To place the interpretation of songs in context, reference was made to the lyrics of other punk bands, most notably Rancid, and various secondary sources including Savage's Sex Pistols biography England's Dreaming (2005) and Gilbert's Clash biography Passion is a Fashion (2004). I used the Marxian ( Marx, 1973, Marx, 1975 and Marx, 1976) theoretical framework of alienation to theoretically ground (although it may be pretentious to claim to “theoretically ground” such philosophical and sociological literates as the members of the Clash) the Clash's awareness of, and compassion for, the victims of the capitalist production process, and its closely related cousin inner-city life. I concur with Boyce (2006), Haslanger (2004), Grace and Cohen (1995, pp. 67–69), and Sy and Tinker (2006, p. 111) by arguing that ethics education must always site ethical dilemmas within their institutional, social, economic and political context. And I go further by pointing out that all of life is a continuous ethical issue once we no longer separate the economic from the social and the political (either in the classroom or in the real world) and once we site all human activity within the context of stratified society and the class struggle (Amernic & Craig, 2004, pp. 352, 360; Kelly, 2003, McGregor, 2001 and Wild, 1978). We need to do our best, as critical accounting educators, to hold on to both aspects of the realist/idealist dialectic of the Clash although to do so consistently and enthusiastically for any length of time is not an easy task (as the Clash's tumultuous and all too brief history reminds us). Without the realism, we become simply uninformed peddlers of utopia; without the idealism, we become just another group of academic positivists indistinguishable (except for our warmer smiles and aversion to statistics!) from the capital markets researchers, the Positive Accountants and the agency theorists. This paper's lyrics analysis has also highlighted another important ethical value that characterizes the Clash: compassion towards society's marginalized groupings (the prisoners and the old man in the bar in “Bankrobber”, the elderly World War 2 veteran in “Something about England” and the exploited working-class in both songs). Importantly, compassion-empathy is a key part of, and can be regarded as a vital pre-requisite to, McPhail's (1999) Levinasian call to “gaz[e] into the face of the Other”.24 This paper has demonstrated how Strummer in the song “Something about England” uses the tools of narrative and flashback to ‘give voice to’ (using a phrase from postmodernism) the other. This next and last section of the paper considers how critical accounting educators can best appropriate the ideology and moral compass of the Clash. What are the implications of the Clash for ethics educators of a critical persuasion today? Educators can begin with, as discussed previously, explaining and highlighting to students the objective alienation created and imposed by the capitalist production process. For a theoretical framework I recommend that educators use Marx's four-fold alienation theory (Marx, 1975, pp. 327–330). These pages clearly show how alienation can be broken down into its four conceptually separate but in practice intermeshed component parts.25 Educators should emphasize in class how alienation is a real and objective condition although the alienated may be unaware of, or choose to repress their awareness of, their alienation due to false consciousness. Alienation is an objective function of the forces and the relations of production. As Saravanamuthu and Tinker (2003) explain, when Ford introduced the moving assembly line in 1913 staff turnover increased dramatically. Alienation also simultaneously increased for the workers at Ford because each worker's identification with the finished product was correspondingly reduced. A possible theoretical framework for the Accounting Theory course taken as a whole is Saravanamuthu and Tinker's (2003) and Amernic and Craig's (2004) counter-hegemonic argument that senior management have a complicated dual obligation to both capital and labour. If the educator perceives Saravanamuthu and Tinker's (2003) theoretical framework to be more informed, balanced, and socially responsible than agency theory, then the former can be used to directly replace the latter. If the educator feels overawed after reading about the new-found power within her/his hands, the following comment from Boyce (2004, p. 577, cited in James, 2007, emphasis added) is worth recalling (and is an appropriate way to end this hopefully challenging paper): The role of lecturers in syllabus design, text selection, setting assessable work, assessment of student work, and, importantly, fronting classes, remains significant [even in the corporatised university], and the challenge is to make space in all of these activities for critical work.