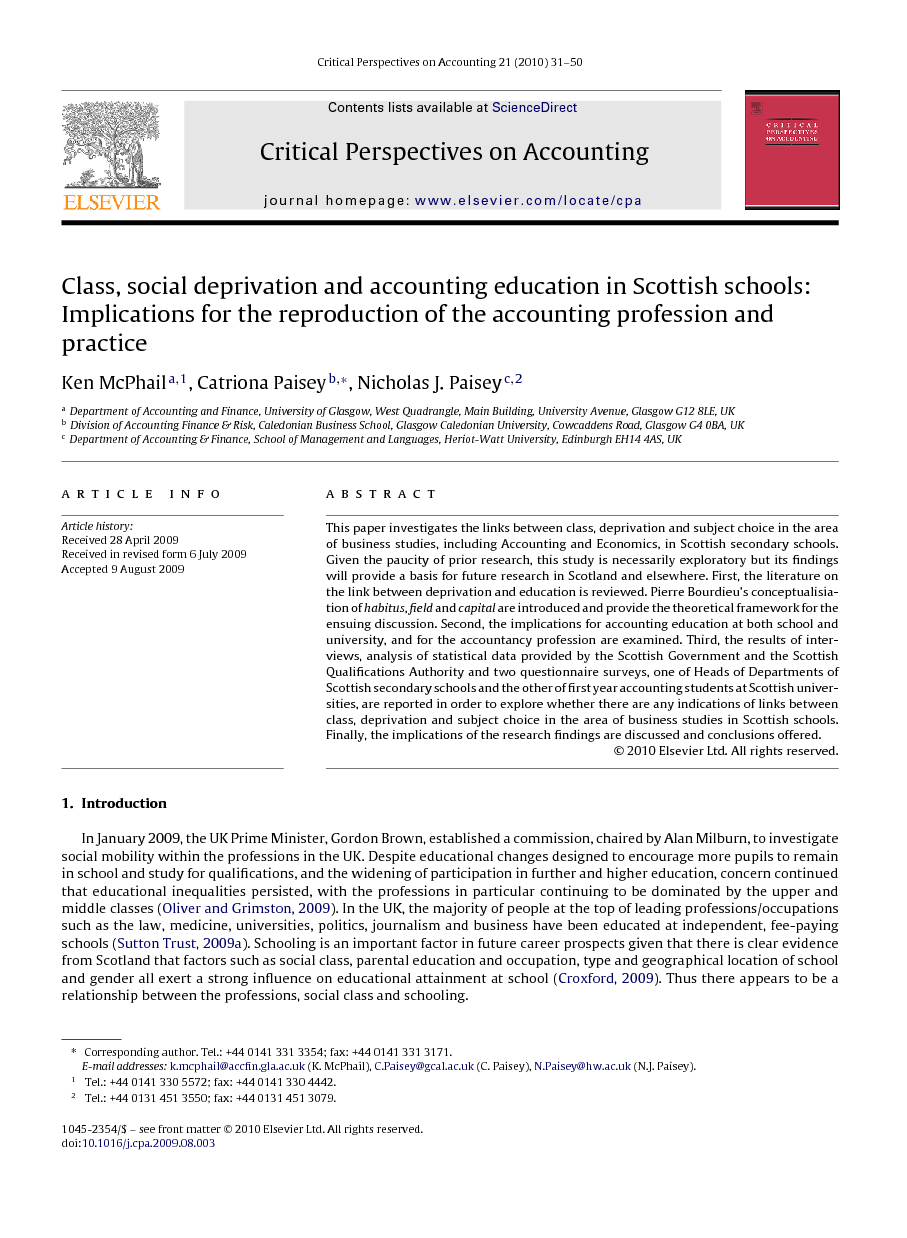 In January 2009, the UK Prime Minister, Gordon Brown, established a commission, chaired by Alan Milburn, to investigate social mobility within the professions in the UK. Despite educational changes designed to encourage more pupils to remain in school and study for qualifications, and the widening of participation in further and higher education, concern continued that educational inequalities persisted, with the professions in particular continuing to be dominated by the upper and middle classes (Oliver and Grimston, 2009). In the UK, the majority of people at the top of leading professions/occupations such as the law, medicine, universities, politics, journalism and business have been educated at independent, fee-paying schools (Sutton Trust, 2009a). Schooling is an important factor in future career prospects given that there is clear evidence from Scotland that factors such as social class, parental education and occupation, type and geographical location of school and gender all exert a strong influence on educational attainment at school (Croxford, 2009). Thus there appears to be a relationship between the professions, social class and schooling. Jacobs (2003) explored issues relating to class reproduction in professional recruitment in the UK, with a particular emphasis on Scotland. His paper considered class, distinction and education. He focused on an analysis of application forms for the recruitment of chartered accountancy trainees and hence was able to show the potential for class distinction in the accountancy recruitment process. However, his empirical work did not explore whether class distinction actually occurred. Nonetheless, his paper implies that class distinction is possible and that this emanates from a much earlier stage than university, having its roots in the family and social class. There has been no study exploring the relationship between class and the school system, and its influence on the accountancy profession in Scotland. This paper aims to address this issue in two ways. It investigates the links between class and subject choice in the area of business studies, Accounting and Economics in Scottish secondary schools. Drawing on this, it explores the associated implications for university education in accounting and for the cultural reproduction of the accountancy profession. Given the paucity of prior research on accounting and business education in schools, this paper is necessarily exploratory but its findings will provide a basis for future research in Scotland and elsewhere. In order to achieve its aim, this paper is structured as follows. First, the literature on the link between class and the accountancy profession is reviewed. This is followed by examination of the links between class and the accountancy profession, on the one hand, and the school system on the other. Following Jacobs (2003), Pierre Bourdieu's work which conceptualises habitus, field and capital, will provide a theoretical framework for the ensuing discussion. Second, the implications for accounting education at both school and university, and for the accountancy profession are examined. In this way, insight is gained into aspects of the habitus of pupils and students at a stage before they are recruited to a chartered accountancy traineeship. Third, the results of interviews, analysis of statistical data provided by the Scottish Government and the Scottish Qualifications Authority (SQA) and two questionnaire surveys, one of Heads of Departments of Scottish secondary schools and the other of first year accounting students at Scottish universities, are reported in order to explore whether there are any indications of links between class and subject choice in the area of business studies in Scottish schools. Finally, the implications of the research findings for accounting education and the accountancy profession are discussed and conclusions offered.