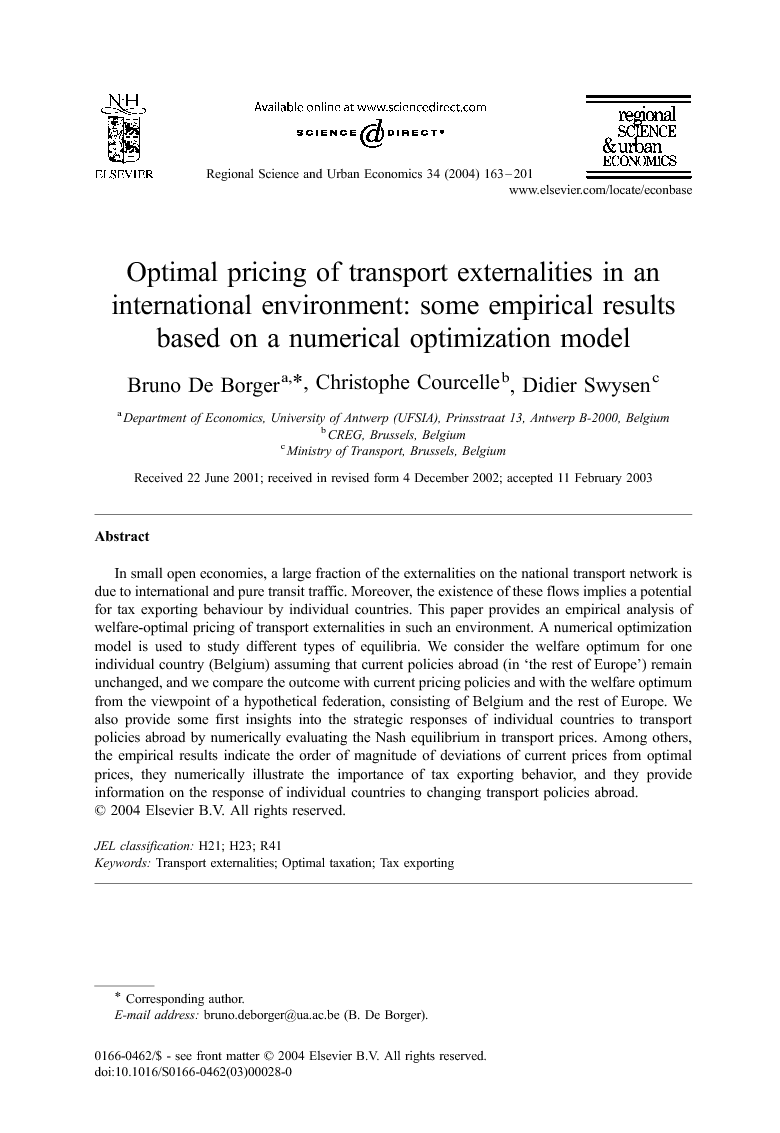 In small open economies, a large fraction of the externalities on the national transport network is due to international and pure transit traffic. Moreover, the existence of these flows implies a potential for tax exporting behaviour by individual countries. This paper provides an empirical analysis of welfare-optimal pricing of transport externalities in such an environment. A numerical optimization model is used to study different types of equilibria. We consider the welfare optimum for one individual country (Belgium) assuming that current policies abroad (in ‘the rest of Europe’) remain unchanged, and we compare the outcome with current pricing policies and with the welfare optimum from the viewpoint of a hypothetical federation, consisting of Belgium and the rest of Europe. We also provide some first insights into the strategic responses of individual countries to transport policies abroad by numerically evaluating the Nash equilibrium in transport prices. Among others, the empirical results indicate the order of magnitude of deviations of current prices from optimal prices, they numerically illustrate the importance of tax exporting behavior, and they provide information on the response of individual countries to changing transport policies abroad.

In this paper we studied optimal pricing and regulation of transport externalities in a federation. The analysis illustrated the role of both domestic and international transport, of external cost spillovers, and of tax exporting behavior associated with the prevalence of international flows on country’s domestic network. A numerical optimization model was used to determine optimal policies for a federation consisting of two asymmetric countries, Belgium and ‘the rest of Europe’. The application compared four types of equilibria: the reference situation reflecting unchanged policies, the federal optimum, the local optimum for one individual country, and the Nash equilibrium solution. The empirical application provided evidence on the required price and tax adjustments on a large number of different sub-markets, defined on the basis of transport mode, period of the day, type of car, etc. With the exception of the reference situation, taking into account the external costs generated by transport flows results in higher taxes on a large variety of transport services for all other equilibria considered. At the federal optimum, it was shown that optimal pricing to cope with externalities requires substantial price increases of the majority of transport services, especially peak road transport. Similar price increases were observed at other equilibria. However, both the local optimum for Belgium and the Nash equilibrium demonstrated the inefficiency of tax exporting behaviour: taxes on freight flows were found to be substantially higher than in the federal optimum, depending on the importance of international flows on the domestic territory. This yielded an overall decline in welfare for the federation as a whole. The local optimum for Belgium involved higher welfare than both the federal optimum and the Nash equilibrium outcome. The former was due to tax exporting, the latter to the absence of reactions by the rest of Europe.