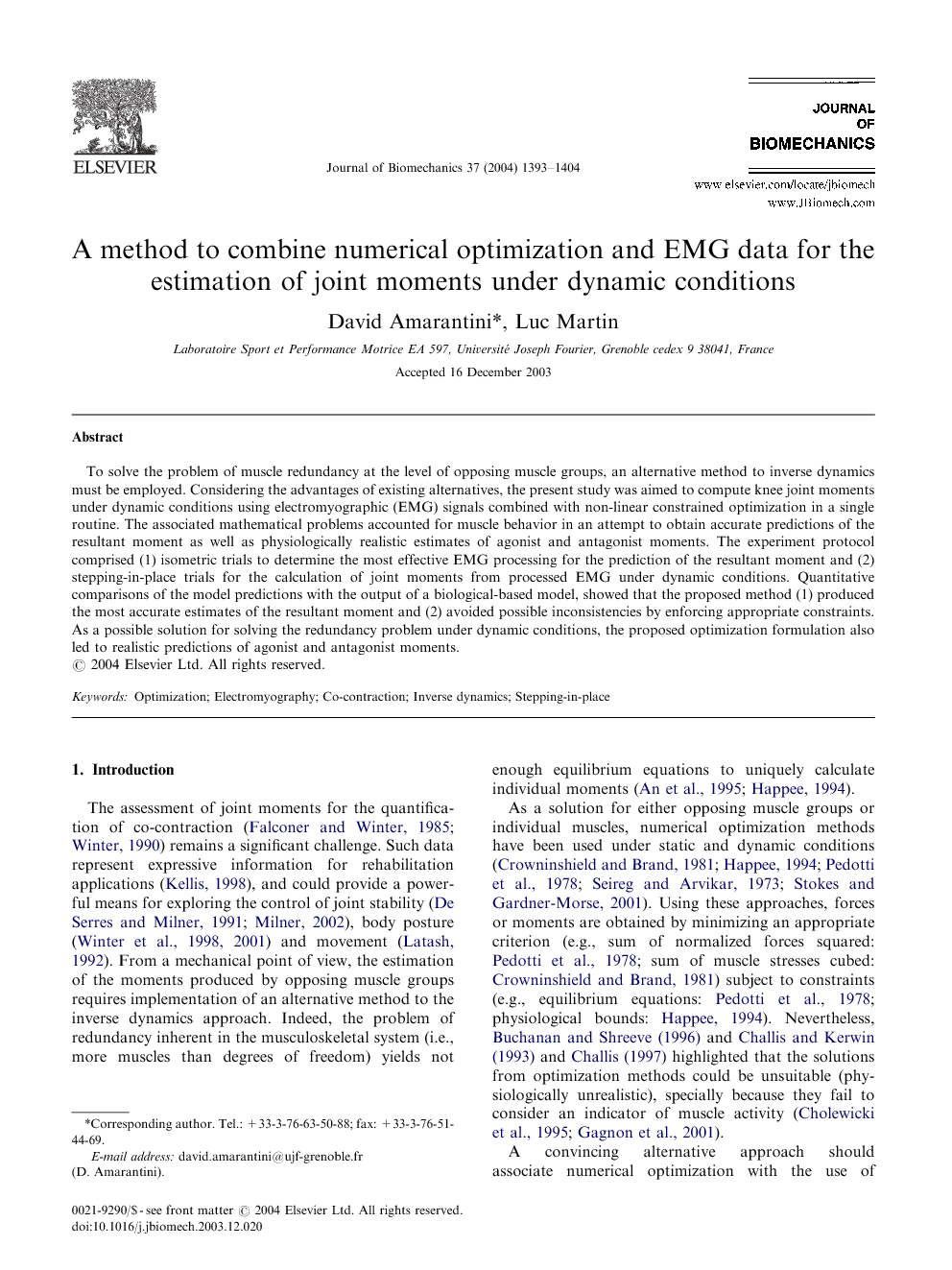 To solve the problem of muscle redundancy at the level of opposing muscle groups, an alternative method to inverse dynamics must be employed. Considering the advantages of existing alternatives, the present study was aimed to compute knee joint moments under dynamic conditions using electromyographic (EMG) signals combined with non-linear constrained optimization in a single routine. The associated mathematical problems accounted for muscle behavior in an attempt to obtain accurate predictions of the resultant moment as well as physiologically realistic estimates of agonist and antagonist moments. The experiment protocol comprised (1) isometric trials to determine the most effective EMG processing for the prediction of the resultant moment and (2) stepping-in-place trials for the calculation of joint moments from processed EMG under dynamic conditions. Quantitative comparisons of the model predictions with the output of a biological-based model, showed that the proposed method (1) produced the most accurate estimates of the resultant moment and (2) avoided possible inconsistencies by enforcing appropriate constraints. As a possible solution for solving the redundancy problem under dynamic conditions, the proposed optimization formulation also led to realistic predictions of agonist and antagonist moments.

The assessment of joint moments for the quantification of co-contraction (Falconer and Winter, 1985; Winter, 1990) remains a significant challenge. Such data represent expressive information for rehabilitation applications (Kellis, 1998), and could provide a powerful means for exploring the control of joint stability (De Serres and Milner, 1991; Milner, 2002), body posture (Winter et al (1998) and Winter et al. (2001)) and movement (Latash, 1992). From a mechanical point of view, the estimation of the moments produced by opposing muscle groups requires implementation of an alternative method to the inverse dynamics approach. Indeed, the problem of redundancy inherent in the musculoskeletal system (i.e., more muscles than degrees of freedom) yields not enough equilibrium equations to uniquely calculate individual moments (An et al., 1995; Happee, 1994). As a solution for either opposing muscle groups or individual muscles, numerical optimization methods have been used under static and dynamic conditions (Crowninshield and Brand, 1981; Happee, 1994; Pedotti et al., 1978; Seireg and Arvikar, 1973; Stokes and Gardner-Morse, 2001). Using these approaches, forces or moments are obtained by minimizing an appropriate criterion (e.g., sum of normalized forces squared: Pedotti et al., 1978; sum of muscle stresses cubed: Crowninshield and Brand, 1981) subject to constraints (e.g., equilibrium equations: Pedotti et al., 1978; physiological bounds: Happee, 1994). Nevertheless, Buchanan and Shreeve (1996) and Challis and Kerwin (1993) and Challis (1997) highlighted that the solutions from optimization methods could be unsuitable (physiologically unrealistic), specially because they fail to consider an indicator of muscle activity (Cholewicki et al., 1995; Gagnon et al., 2001). A convincing alternative approach should associate numerical optimization with the use of electromyographic (EMG) signals, which provide information on the level of muscle activity. Under isometric contractions the development of powerful algorithms for computing efforts from EMG (Buchanan et al., 1993; Laursen et al., 1998; van Dieen and Visser, 1999) is more conveniently performed because the relationship between force and EMG can be considered as linear (Hof, 1997; Onishi et al., 2000). Conversely, the use of EMG as an input variable under dynamic conditions involves major limitations because of muscle dynamics and possible signal artefacts (Kellis, 1998; Rainoldi et al., 2000). To solve this problem, Olney and Winter (1985) introduced a powerful solution, accounting for the moment–angle and the moment–velocity effects. Their influence was incorporated into the model with two biological-based constants depending, respectively, upon angular changes and angular velocity (for details see Olney and Winter, 1985, p.10). The associated experiment protocol comprised two sessions to (1) calculate coefficients to establish the relationship between EMG and the resultant moment under isometric contractions and (2) compute the joint moments during gait according to the coefficients calculated during the first session. Nevertheless, the solutions provided by this method should be adjusted by enforcing sub-weights, in order to perfectly balance the resultant joint moment (Cholewicki and McGill, 1994). Whether including this optimization algorithm as a separate routine can fully satisfy the equilibrium equations associated with the resultant moment (Cholewicki et al., 1995; Gagnon et al., 2001), the agonist and antagonist moments may remain physiologically unrealistic. Moreover with such methods, the associated criterion does not exploit the possibility of reflecting “a mechanism via which the human body recruits muscles to produce a joint moment” (Challis, 1997, p. 254). So, the purpose of the present study was to develop a procedure associating the two alternatives presented above in a single routine for solving the redundancy problem at the level of knee muscle groups under dynamic conditions. To address this issue, we used an approach inspired by Olney and Winter (1985) during stepping-in-place. This task was used for studies on the control of body posture and locomotion (Breniere and Ribreau, 1998; Ivanenko et al., 2000) and presents spatio-temporal characteristics similar to gait (Garcia et al., 2001). From a mathematical point of view: (1) non-linear constrained optimization was implemented for the calculations and (2) the expressions were developed to account for the influence of the biarticularity of the muscles crossing the knee joint (Basmajian and De Luca, 1985, pp. 232–239). The results obtained from our approach are compared with those given by using other algorithms (Olney and Winter, 1985).

The present study was aimed to predict the agonist and antagonist muscle moments at the knee joint during dynamic conditions. The associated method used EMG data and the estimates of the resultant moment as inputs, and implements non-linear optimization. We used an experimental protocol inspired by Olney and Winter (1985) that comprised an isometric calibration and stepping-in-place trials. For isometric calibration, the incremental (Olney and Winter, 1985) and the optimization algorithms (, , , , and ) produced very accurate estimates of the resultant moment according to obtained relative RMS errors. Although the optimization procedure yielded finer estimates of the design variables, the relationship linking EMG signals and the resultant moment was not improved when implementing non-linear curve-fitting. On the other hand, the optimization method avoided emerging of discrepancies because constraints were enforced. This advantage has been expressed by Challis (1997) for the calculation of realistic muscle forces. Here, the results proved that imposing constraints was necessary to assure that the sign convention was satisfied. Whether evidence was given for the use of optimization, the results concerning the exponents (p) and the cut-off frequencies (fc) suggested that the expressions associated with the optimization problem could be simplified. By using EMG exponentiation, the optimal relationships linking each individual muscle moment and EMG data were not closely linear, in agreement with the results found by others (Onishi et al., 2000). However, from a mathematical point of view, the lack of improvement in the performance of the model indicated that a linear relationship between moment and EMG could be sufficiently adequate under isometric conditions (Olney and Winter, 1985; van Dieen and Visser, 1999). Similarly, the results suggested that fc could be separately assigned a constant value for all muscles. Considering the previous estimates of the optimal cut-off frequency (Olney and Winter, 1985; Potvin et al., 1996) and those from the current method, the use of 2.5 Hz may be relevant for the prediction of the efforts. Under dynamic conditions, the optimal coefficients obtained from isometric calibration were used to process EMG signals. Large deviations were produced between MKdyn and View the MathML source using a similar routine to that proposed by Olney and Winter (1985). The predictions of the resultant moment were not sufficiently accurate for our purpose and thus, yielded unsuitable estimates of the agonist and antagonist moments. These discrepancies may be attributed to distortions in EMG signals, differences in the protocol and the algorithms used for isometric calibration, as well as the use of a different task for dynamic conditions. Nevertheless, criticisms could be leveled at the mathematical formulation of the problem. Indeed, inconsistencies regarding the polarity of either design coefficients or muscle moments remained under dynamic conditions when using least-squares estimation. With the developments of the mathematical expressions and the use of optimization algorithms in the proposed method, the accuracy of the fit was dramatically improved since the relative RMS error decreased from 44.62±12.27% to 1.01±0.48%. The solutions for βK and δK resulting from the two approaches were identical, that is, the improvement of ability to predict MKdyn from EMG data could be explained by (1) the coefficients (w) incorporated to adjust each muscle moment and (2) the terms included to account for the biarticularity of the muscles. Here, the adjustments inspired by the method proposed by Cholewicki and McGill (1994) in a way to assure mechanical equilibrium contributed to accurately estimate the resultant moment. The results indicated the relevancy of considering how angular positions and velocities both affect the production of muscle force (Olney and Winter, 1985) as well as the biarticularity of the muscles crossing the knee joint. Specifically, the high value of βA (associated to the ankle joint) suggested that it was justified to take the biarticularity of GA in account to produce accurate estimates of knee joint moments. Nevertheless, the patterns of β and δ were not obvious because of the high inter-subject variability. By using the optimization method, the discrepancies observed from least-squares estimation did not emerge because constraints (boundaries and polarity) were enforced. In addition to producing an excellent degree of fit between MKdyn and View the MathML source the use of a multicomponent objective function for the non-linear optimization problem fulfilled two major objectives. First, the non-linearity of Cdyn predicted all muscles to be active (Challis and Kerwin, 1993). Secondly, the solution produced realistic estimates of the agonist and antagonist moments since they did not overcome the moments reached at 100% MVC under isometric conditions. In conclusion, our method associates the use of EMG and optimization in a single routine and provides accurate estimates of the muscle moments under dynamic conditions. Despite the impossibility of comparing our solutions with the muscle moments measured in vivo, efforts were made to obtain physiologically realistic results (according to the definition given by Challis and Kerwin, 1993, p. 139). Indeed, the model accounts for an indicator of muscle activity, incorporates the isometric moment–EMG relationships, accounts for the moment–angle and the moment–velocity effects and integrates the influence of muscle biarticularity.