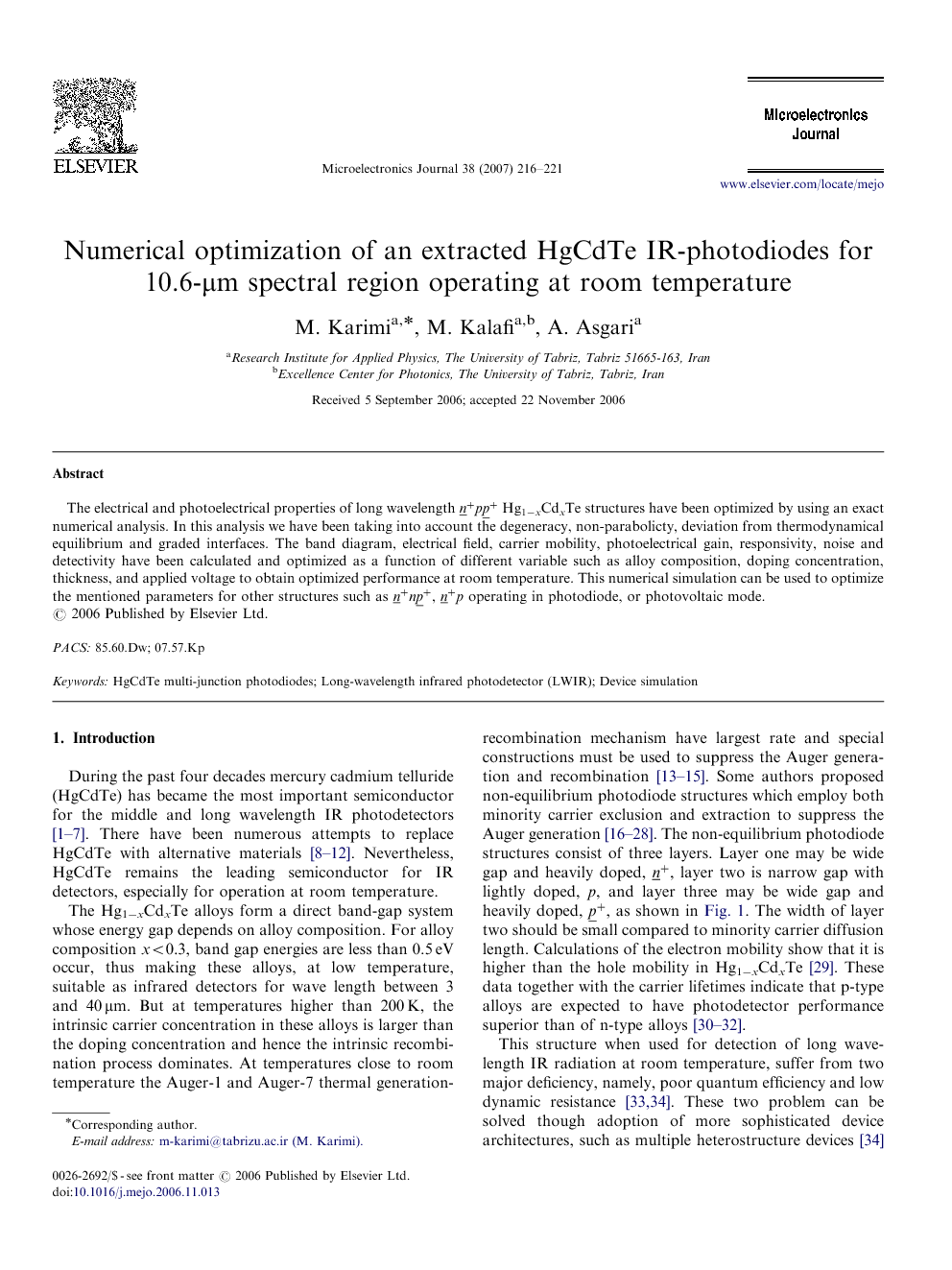 The electrical and photoelectrical properties of long wavelength View the MathML source Hg1−xCdxTe structures have been optimized by using an exact numerical analysis. In this analysis we have been taking into account the degeneracy, non-parabolicty, deviation from thermodynamical equilibrium and graded interfaces. The band diagram, electrical field, carrier mobility, photoelectrical gain, responsivity, noise and detectivity have been calculated and optimized as a function of different variable such as alloy composition, doping concentration, thickness, and applied voltage to obtain optimized performance at room temperature. This numerical simulation can be used to optimize the mentioned parameters for other structures such as View the MathML source, View the MathML source operating in photodiode, or photovoltaic mode.

During the past four decades mercury cadmium telluride (HgCdTe) has became the most important semiconductor for the middle and long wavelength IR photodetectors [1], [2], [3], [4], [5], [6] and [7]. There have been numerous attempts to replace HgCdTe with alternative materials [8], [9], [10], [11] and [12]. Nevertheless, HgCdTe remains the leading semiconductor for IR detectors, especially for operation at room temperature. The Hg1−xCdxTe alloys form a direct band-gap system whose energy gap depends on alloy composition. For alloy composition x<0.3, band gap energies are less than 0.5 eV occur, thus making these alloys, at low temperature, suitable as infrared detectors for wave length between 3 and 40 μm. But at temperatures higher than 200 K, the intrinsic carrier concentration in these alloys is larger than the doping concentration and hence the intrinsic recombination process dominates. At temperatures close to room temperature the Auger-1 and Auger-7 thermal generation-recombination mechanism have largest rate and special constructions must be used to suppress the Auger generation and recombination [13], [14] and [15]. Some authors proposed non-equilibrium photodiode structures which employ both minority carrier exclusion and extraction to suppress the Auger generation [16], [17], [18], [19], [20], [21], [22], [23], [24], [25], [26], [27] and [28]. The non-equilibrium photodiode structures consist of three layers. Layer one may be wide gap and heavily doped, View the MathML source, layer two is narrow gap with lightly doped, p, and layer three may be wide gap and heavily doped, View the MathML source, as shown in Fig. 1. The width of layer two should be small compared to minority carrier diffusion length. Calculations of the electron mobility show that it is higher than the hole mobility in Hg1−xCdxTe [29]. These data together with the carrier lifetimes indicate that p-type alloys are expected to have photodetector performance superior than of n-type alloys [30], [31] and [32]This structure when used for detection of long wavelength IR radiation at room temperature, suffer from two major deficiency, namely, poor quantum efficiency and low dynamic resistance [33] and [34]. These two problem can be solved though adoption of more sophisticated device architectures, such as multiple heterostructure devices [34] or stacked multi-junction photodiodes [32]. In either case, a single View the MathML source photodiode is used as primary cell for construction of such devices. Using of optimized parameters of a single View the MathML source photodiode such as thickness, composition and doping (for both contact and active region) could have a considerable impact on performance of the devices. In this paper we propose an exact numerical analysis to optimize all the basic parameters of a long wavelength View the MathML source Hg1−xCdxTe photodiode at room temperature. This analysis can be also applied to optimize the parameters of similar structure operating in different modes. We believe that our method can give more reliable result than obtained by previous optimization [35] and [36].

The optimum View the MathML sourcedouble barrier heterojunction photodiode parameters—such as thickness, alloy composition, doping concentration and applied bias- at room temperature has been reported in this paper. It results from the calculations carried out that the detectivity possible to be attained in this structure under reverse bias is about three-times greater than unbiased photovoltaic devises. The optimized single photodiode could be used as a primary cell for construction of stacked multi-junction photodiodes which have found increasingly widespread civilian and military applications.