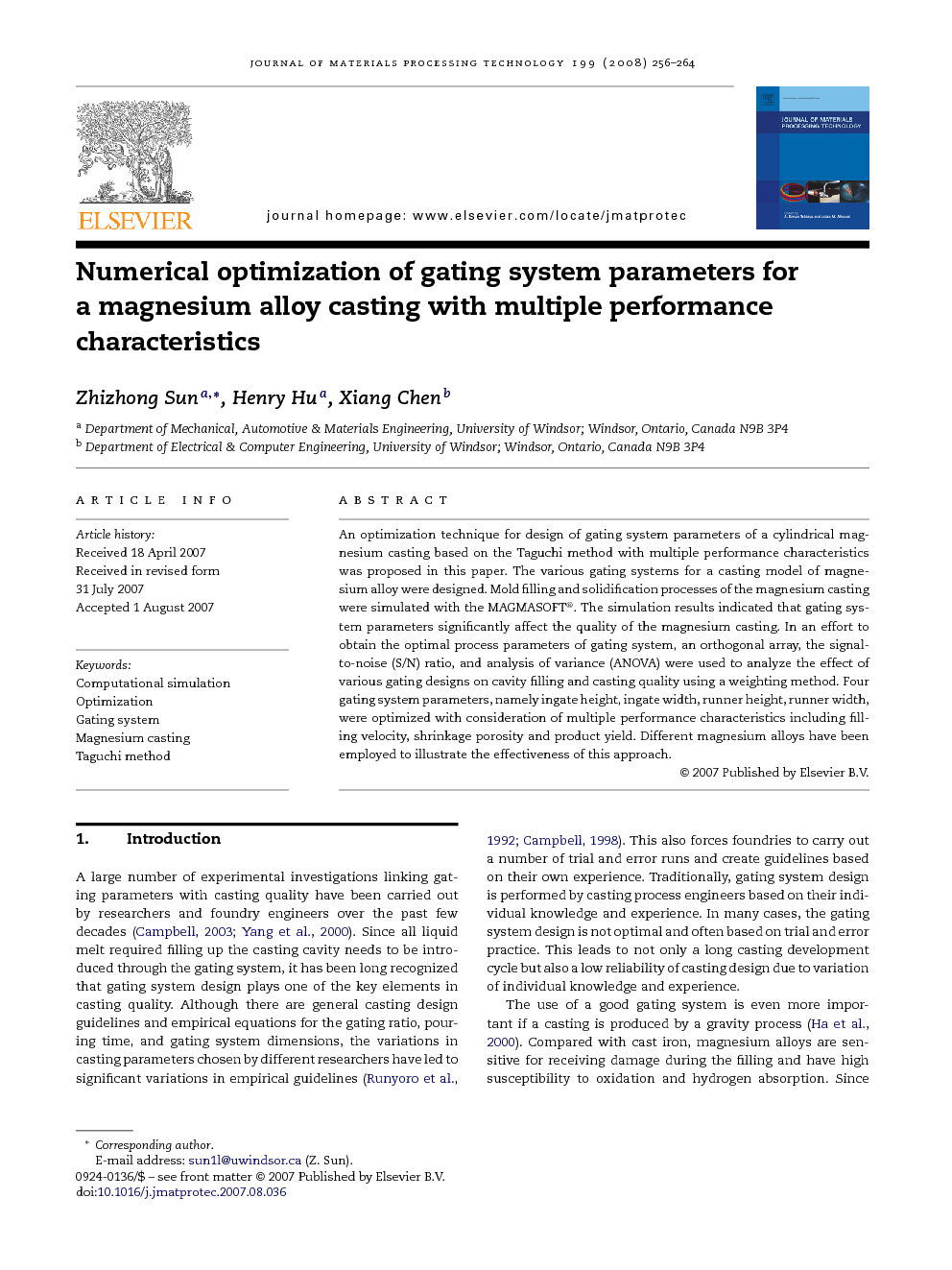 An optimization technique for design of gating system parameters of a cylindrical magnesium casting based on the Taguchi method with multiple performance characteristics was proposed in this paper. The various gating systems for a casting model of magnesium alloy were designed. Mold filling and solidification processes of the magnesium casting were simulated with the MAGMASOFT®. The simulation results indicated that gating system parameters significantly affect the quality of the magnesium casting. In an effort to obtain the optimal process parameters of gating system, an orthogonal array, the signal-to-noise (S/N) ratio, and analysis of variance (ANOVA) were used to analyze the effect of various gating designs on cavity filling and casting quality using a weighting method. Four gating system parameters, namely ingate height, ingate width, runner height, runner width, were optimized with consideration of multiple performance characteristics including filling velocity, shrinkage porosity and product yield. Different magnesium alloys have been employed to illustrate the effectiveness of this approach.

A large number of experimental investigations linking gating parameters with casting quality have been carried out by researchers and foundry engineers over the past few decades (Campbell, 2003 and Yang et al., 2000). Since all liquid melt required filling up the casting cavity needs to be introduced through the gating system, it has been long recognized that gating system design plays one of the key elements in casting quality. Although there are general casting design guidelines and empirical equations for the gating ratio, pouring time, and gating system dimensions, the variations in casting parameters chosen by different researchers have led to significant variations in empirical guidelines (Runyoro et al., 1992 and Campbell, 1998). This also forces foundries to carry out a number of trial and error runs and create guidelines based on their own experience. Traditionally, gating system design is performed by casting process engineers based on their individual knowledge and experience. In many cases, the gating system design is not optimal and often based on trial and error practice. This leads to not only a long casting development cycle but also a low reliability of casting design due to variation of individual knowledge and experience. The use of a good gating system is even more important if a casting is produced by a gravity process (Ha et al., 2000). Compared with cast iron, magnesium alloys are sensitive for receiving damage during the filling and have high susceptibility to oxidation and hydrogen absorption. Since oxide formation is instantaneous in magnesium, the design of gating system plays more important role on minimizing the entrance of oxides on the surface of the molten metal into the casting and also to prevent turbulence in the metal stream caused by excessive velocities of the molten metal, free-falling of the stream while passing from one level to another, vortices formed, or abrupt changes in the flow direction (Hu and Yu, 2002 and Green and Campbell, 1994). Therefore, magnesium castings are vulnerable to certain defects such as porosity, oxide inclusions, which are known to be attributed to the faulty design of gating system with incorrect mold filling. In order to achieve a good gating system, it is necessary to start from fundamental hydraulic principles. In the past decades, some equations based on empirical relationships have been derived and used to design a gating system (Svoboda, 1995). After applying these relationships, a gating system of questionable quality is obtained. A lot of effort has been made to understand the influence of gating system design on mold filling using various techniques. A given design of gating system is usually validated by pouring and sectioning the test casting, or by observing the flow of molten metal in a sand mould using radiography, real time X-ray and video camera (Ha et al., 2000), or the flow of water in a transparent mould, or using contact wire sensing using computerized data acquisition (Schuhmann et al., 1994). Typically, modifying gating geometry by applying this trial-and-error approach, a better gating system can be achieved. However, this trial-and-error approach is time consuming and expensive. The first research showing an effect to apply a numerical optimization methodology to optimize a gating system is due to Bradley and Heinemann in 1993 (Bradley and Heinemann, 1993). They used simple hydraulic models to simulate the optimization of gating during filling of molds. In 1997, MacDavid and Dantzig used a mathematical development addressing the design sensitivity within two-dimensional mold geometry. By the end of the 1990s, the computer modeling enabled visualization of mold filling to be carried out cost-effectively in casting design and optimization of gating system. Numerical simulators based on FDM and FEM methods provide powerful means of analyzing various phenomena occurring during the casting process (McDavid and Dantzig, 1998a and McDavid and Dantzig, 1998b). The trial-and-error approach practices moved away from the real model to the virtual one. Numerical simulation program were able to simulate the behavior of molten metal close to reality, obtaining the better final design, but still not the optimum design (Kor et al., 2006). Up to now, there are following optimization method applying to the gating system design: the gradient search method, the FEM neural network method, and the Taguchi method (Lee and Lin, 2006, Esparza et al., 2006 and Anastasion, 2002). Dr. Genichi Taguchi has introduced several new statistical tools and concepts of quality improvement that depend heavily on the statistical theory of experimental design (Taguchi, 1998 and Byrne and Taguchi, 1987). Some applications of Taguchi's methods in the foundry industry have shown that the variation in casting quality caused by uncontrollable process variables can be minimized (Johnston, 1989, Kumar and Gaindhar, 1995 and Barua et al., 1997). The casting process has a large number of parameters that may affect the quality of castings. Some of these parameters are controllable while others are noise factors. Therefore, the optimization of casting parameters using the Taguchi method is the better choice for rapid casting quality improvement. The purpose of this paper is to demonstrate how the application of numerical optimization techniques can be used to develop an effective optimization process for gating system design. An optimization technique of gating system parameters based on a cylindrical magnesium casting using the Taguchi method with multiple performance characteristics is proposed. The analysis of variance is also investigated for the gating parameters with multiple characteristics. Mold filling and solidification processes of the castings were simulated with the MAGMASOFT® (MAGMASOFT, 2006). The simulation results indicated that gating system parameters significantly affect the casting quality. This virtual approach and optimization technique can be applied to the foundry industry, which is evidently superior to typical trial-and-error approaches.

The Taguchi method with multiple performance characteristics has been demonstrated for obtaining a set of optimal gating system parameters based on the defined objectives. The conclusions may be stated as follows: (1) The multiple performance characteristics such as product yield, shrinkage porosity, and filling velocity can be simultaneously considered and improved through this optimization technique. (2) For case 1 and case 2, the A2B3C3D2 is the optimum level with the maximum multiresponse S/N ratio. For case 3, the A3B3C3D2 is the optimum level with the maximum multiresponse S/N ratio. (3) Regardless of the case 1 to case 3, the sequence of the four factors affecting the casting quality is the runner height, the runner width, the ingate height, and the ingate width. The runner height is the most significant factor which influences the casting quality. (4) The optimal parameters for the gating system may be varied with different weighting factors from case to case, in which factors and evaluating objective functions should be defined based on the real engineering requirement.