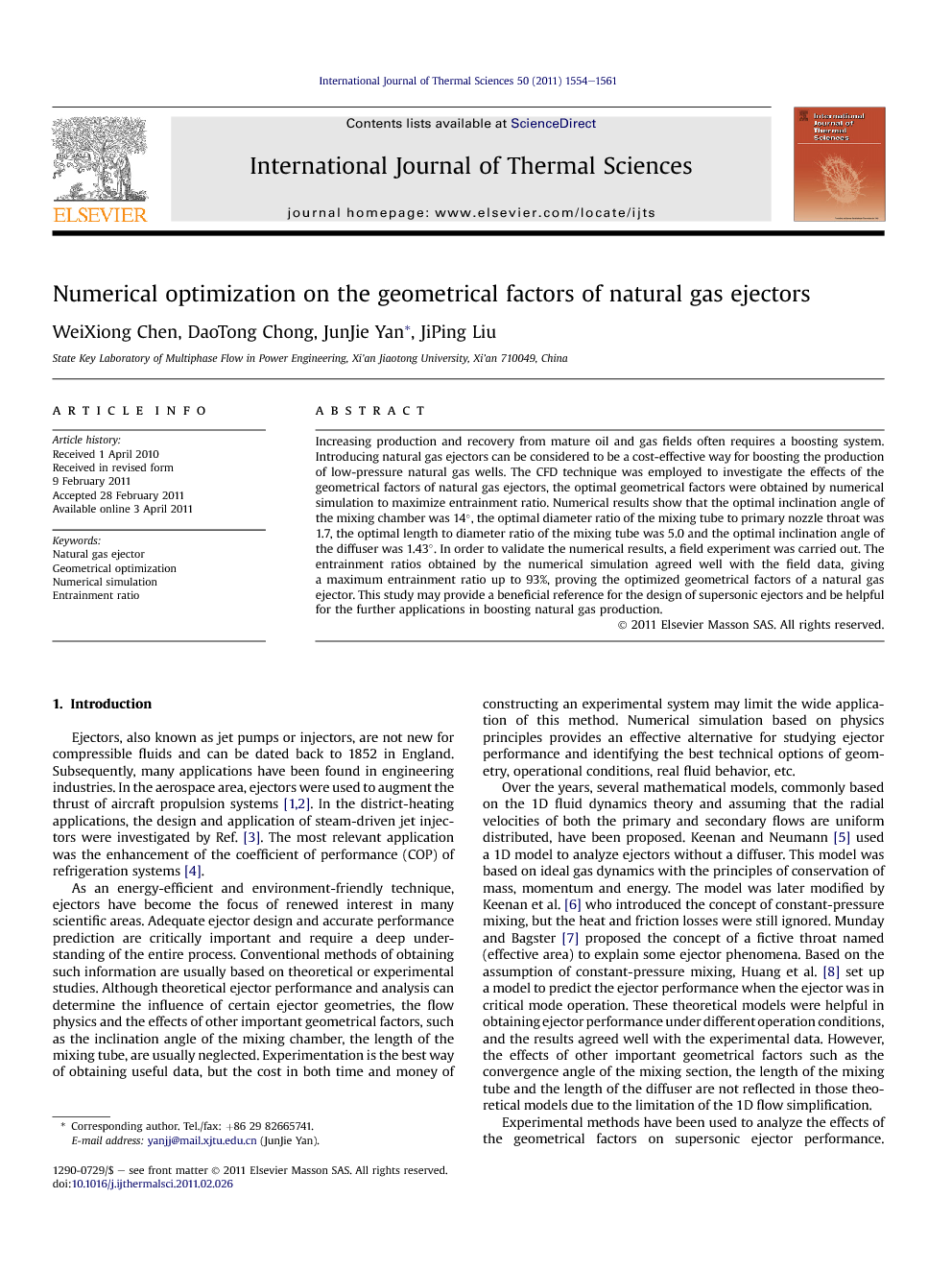 Increasing production and recovery from mature oil and gas fields often requires a boosting system. Introducing natural gas ejectors can be considered to be a cost-effective way for boosting the production of low-pressure natural gas wells. The CFD technique was employed to investigate the effects of the geometrical factors of natural gas ejectors, the optimal geometrical factors were obtained by numerical simulation to maximize entrainment ratio. Numerical results show that the optimal inclination angle of the mixing chamber was 14°, the optimal diameter ratio of the mixing tube to primary nozzle throat was 1.7, the optimal length to diameter ratio of the mixing tube was 5.0 and the optimal inclination angle of the diffuser was 1.43°. In order to validate the numerical results, a field experiment was carried out. The entrainment ratios obtained by the numerical simulation agreed well with the field data, giving a maximum entrainment ratio up to 93%, proving the optimized geometrical factors of a natural gas ejector. This study may provide a beneficial reference for the design of supersonic ejectors and be helpful for the further applications in boosting natural gas production.

Ejectors, also known as jet pumps or injectors, are not new for compressible fluids and can be dated back to 1852 in England. Subsequently, many applications have been found in engineering industries. In the aerospace area, ejectors were used to augment the thrust of aircraft propulsion systems [1] and [2]. In the district-heating applications, the design and application of steam-driven jet injectors were investigated by Ref. [3]. The most relevant application was the enhancement of the coefficient of performance (COP) of refrigeration systems [4]. As an energy-efficient and environment-friendly technique, ejectors have become the focus of renewed interest in many scientific areas. Adequate ejector design and accurate performance prediction are critically important and require a deep understanding of the entire process. Conventional methods of obtaining such information are usually based on theoretical or experimental studies. Although theoretical ejector performance and analysis can determine the influence of certain ejector geometries, the flow physics and the effects of other important geometrical factors, such as the inclination angle of the mixing chamber, the length of the mixing tube, are usually neglected. Experimentation is the best way of obtaining useful data, but the cost in both time and money of constructing an experimental system may limit the wide application of this method. Numerical simulation based on physics principles provides an effective alternative for studying ejector performance and identifying the best technical options of geometry, operational conditions, real fluid behavior, etc. Over the years, several mathematical models, commonly based on the 1D fluid dynamics theory and assuming that the radial velocities of both the primary and secondary flows are uniform distributed, have been proposed. Keenan and Neumann [5] used a 1D model to analyze ejectors without a diffuser. This model was based on ideal gas dynamics with the principles of conservation of mass, momentum and energy. The model was later modified by Keenan et al. [6] who introduced the concept of constant-pressure mixing, but the heat and friction losses were still ignored. Munday and Bagster [7] proposed the concept of a fictive throat named (effective area) to explain some ejector phenomena. Based on the assumption of constant-pressure mixing, Huang et al. [8] set up a model to predict the ejector performance when the ejector was in critical mode operation. These theoretical models were helpful in obtaining ejector performance under different operation conditions, and the results agreed well with the experimental data. However, the effects of other important geometrical factors such as the convergence angle of the mixing section, the length of the mixing tube and the length of the diffuser are not reflected in those theoretical models due to the limitation of the 1D flow simplification. Experimental methods have been used to analyze the effects of the geometrical factors on supersonic ejector performance. Experimental data obtained by Keenan et al. [5] and [6], and Huang and Chen [9], showed that the entrainment ratio decreased as the primary nozzle moved away from the mixing tube. In contrast, Aphornratana and Eames [10] reported that the entrainment ratio increased as the primary nozzle moved away from the mixing tube. Both works however suggest that there is an optimal location for the primary nozzle for obtaining the best performance. ESDU [11] recommended that the best design for the convergence angle of the mixing chamber is about 10°, while ASHRAE [12] proposed that the optimal value is in the range of 7–10°. In addition, optimal inclination angle of diffuser is in the range of 4–8° according to ESDU, whereas ASHRAE recommended 5–7°. Many recent studies based predominantly on the CFD approach [13], [14] and [15], were expected to provide a reasonable cost and a good understanding of local phenomena. In the present work, the CFD modeling technique has been used to investigate the geometrical factors of natural gas ejectors.

In this work, the geometrical factors of a ejector for boosting low-pressure natural gas production were investigated by the CFD technique, and the geometrical optimization presented in this work contributed to significant improvement of the ejector performance. In addition, its performance under different operation conditions was investigated by field experiment, with the motive pressure ranging from 10.0 MPa to 14.0 MPa, induced pressure ranging from 1.0 MPa to 5.0 MPa, and discharged pressure setting at 5.2 MPa. Based on the results of field experiments and numerical modeling, the conclusions are summarized as follows: 1. The geometrical optimization was carried out on the mixing chamber, mixing tube and diffuser. The numerical results showed that the optimal inclination angle of the mixing chamber was 14°, the optimal diameter ratio of the mixing tube to primary nozzle throat was 1.7, the optimal length to diameter ratio of the mixing tube was 5.0 and the optimal inclination angle of the diffuser was 1.43°. 2. The performance of the natural gas supersonic ejector was examined by the field experiments and numerical simulation. The entrainment ratio, obtained from experiment, agreed well with those from numerical simulation. When the motive pressure increased, the entrainment ratio reached a peak value and then decreased when the induced pressure was less than 4.5 MPa, the peak value being between 11 MPa and 13 MPa. When the induced pressure was larger than 4.5 MPa, the entrainment ratio decreased almost linearly with the rise of motive pressure and increased linearly with the rise of induced pressure for the motive pressure ranging from 10 MPa to 14 MPa. The maximum entrainment ratio was 93% when the motive pressure was 10 MPa and the induced pressure was 5.0 MPa. These results showed that the numerical simulation approach based on physics principles provided an effective alternative in the study of ejector performance. The optimal geometrical factors obtained in the present work may provide a beneficial reference for the design of supersonic ejectors. The present work contributes to potentially widen their application in boosting low-pressure natural gas production.