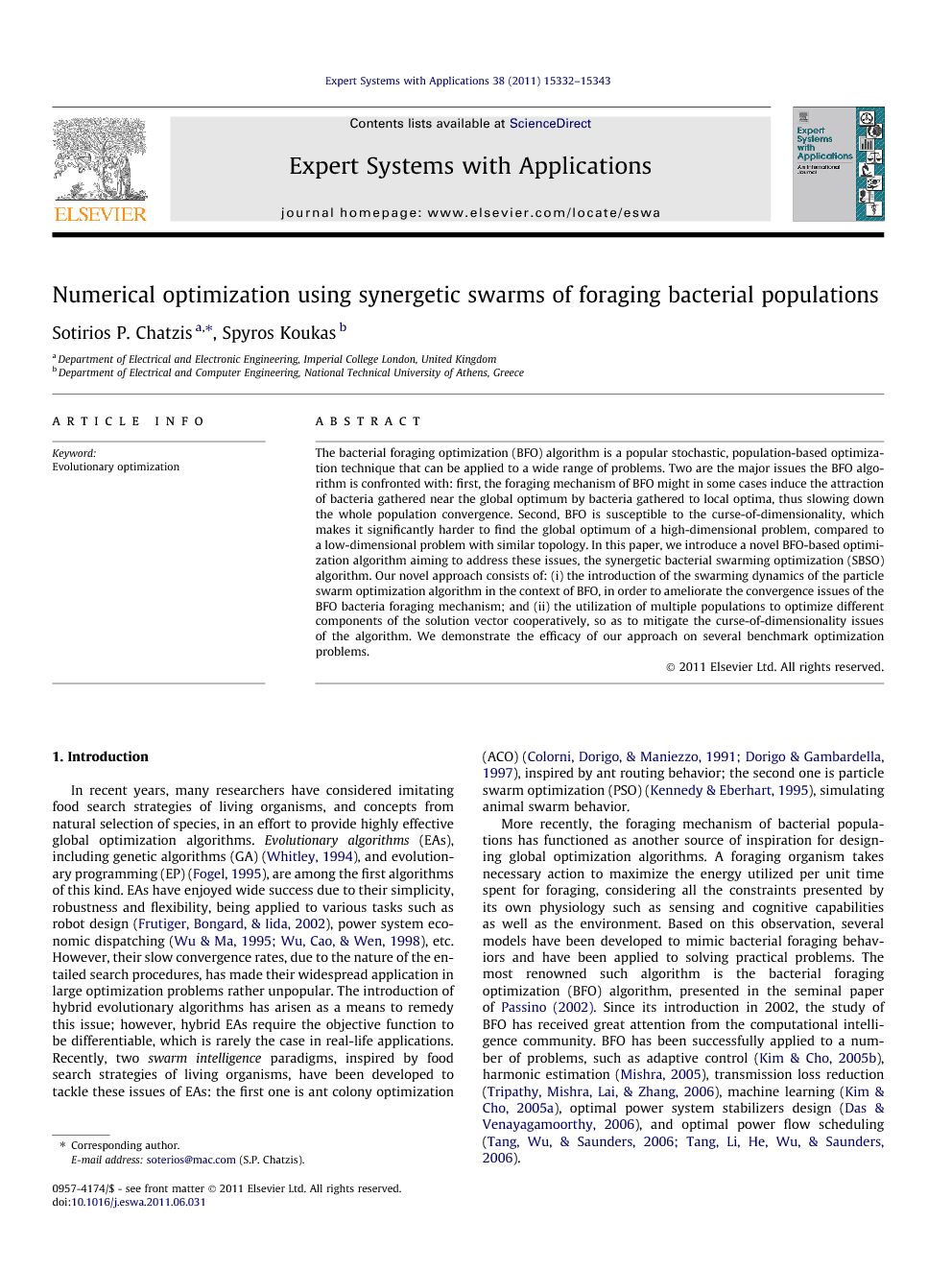 The bacterial foraging optimization (BFO) algorithm is a popular stochastic, population-based optimization technique that can be applied to a wide range of problems. Two are the major issues the BFO algorithm is confronted with: first, the foraging mechanism of BFO might in some cases induce the attraction of bacteria gathered near the global optimum by bacteria gathered to local optima, thus slowing down the whole population convergence. Second, BFO is susceptible to the curse-of-dimensionality, which makes it significantly harder to find the global optimum of a high-dimensional problem, compared to a low-dimensional problem with similar topology. In this paper, we introduce a novel BFO-based optimization algorithm aiming to address these issues, the synergetic bacterial swarming optimization (SBSO) algorithm. Our novel approach consists of: (i) the introduction of the swarming dynamics of the particle swarm optimization algorithm in the context of BFO, in order to ameliorate the convergence issues of the BFO bacteria foraging mechanism; and (ii) the utilization of multiple populations to optimize different components of the solution vector cooperatively, so as to mitigate the curse-of-dimensionality issues of the algorithm. We demonstrate the efficacy of our approach on several benchmark optimization problems.

In recent years, many researchers have considered imitating food search strategies of living organisms, and concepts from natural selection of species, in an effort to provide highly effective global optimization algorithms. Evolutionary algorithms (EAs), including genetic algorithms (GA) (Whitley, 1994), and evolutionary programming (EP) (Fogel, 1995), are among the first algorithms of this kind. EAs have enjoyed wide success due to their simplicity, robustness and flexibility, being applied to various tasks such as robot design (Frutiger, Bongard, & Iida, 2002), power system economic dispatching ( Wu and Ma, 1995 and Wu et al., 1998), etc. However, their slow convergence rates, due to the nature of the entailed search procedures, has made their widespread application in large optimization problems rather unpopular. The introduction of hybrid evolutionary algorithms has arisen as a means to remedy this issue; however, hybrid EAs require the objective function to be differentiable, which is rarely the case in real-life applications. Recently, two swarm intelligence paradigms, inspired by food search strategies of living organisms, have been developed to tackle these issues of EAs: the first one is ant colony optimization (ACO) ( Colorni et al., 1991 and Dorigo and Gambardella, 1997), inspired by ant routing behavior; the second one is particle swarm optimization (PSO) (Kennedy & Eberhart, 1995), simulating animal swarm behavior. More recently, the foraging mechanism of bacterial populations has functioned as another source of inspiration for designing global optimization algorithms. A foraging organism takes necessary action to maximize the energy utilized per unit time spent for foraging, considering all the constraints presented by its own physiology such as sensing and cognitive capabilities as well as the environment. Based on this observation, several models have been developed to mimic bacterial foraging behaviors and have been applied to solving practical problems. The most renowned such algorithm is the bacterial foraging optimization (BFO) algorithm, presented in the seminal paper of Passino (2002). Since its introduction in 2002, the study of BFO has received great attention from the computational intelligence community. BFO has been successfully applied to a number of problems, such as adaptive control (Kim & Cho, 2005b), harmonic estimation (Mishra, 2005), transmission loss reduction (Tripathy, Mishra, Lai, & Zhang, 2006), machine learning (Kim & Cho, 2005a), optimal power system stabilizers design (Das & Venayagamoorthy, 2006), and optimal power flow scheduling (Tang and Wu et al., 2006 and Tang et al., 2006). Although BFO has prominent and encouraging performance for global optimization problems, it has also been shown that the convergence of the algorithm can be problematic, leading to long execution times or even getting trapped to local optima. Indeed, in BFO, the chemotactic process is artificially set, imposing that the bacteria swarm together and keep a safe distance from each other. However, such a mechanism suppresses to some extent the algorithm convergence, since it could allow bacteria in nutrient-poor areas to attract bacteria in nutrient-rich areas, thus slowing down the convergence speed of the entire population. The repelling effect among bacteria also prevents the population from gathering together. To resolve these issues, inspired by the swarming mechanism of the PSO algorithm, a novel principle of swarming is introduced in the context of BFO in Tang, Wu, and Saunders (2007), under which the bacterial swarming algorithm (BSA) has been obtained. The BSA algorithm is based on the adjustment of each bacterium position according to the neighborhood environment and the position of the best bacterium, alternatively. Experimental results have shown that the swarming mechanism of BSA allows for faster and more efficient convergence, preventing the bacteria from being trapped into local optima. Despite these advances, bacterial foraging-based optimization algorithms continue to suffer from the curse-of-dimensionality issue, which, in essence, implies a significant performance decrease as the dimensionality of the search space increases. The curse-of-dimensionality is a well-known problem most stochastic optimization algorithms (including PSO and GAs) suffer from, and results from the very definition of the problem being handled. Indeed, an evolutionary search-based optimization algorithm converges upon generation of a solution that falls in the optimality region, that is a small volume of the search space surrounding the global optimum. However, the probability of generating a sample inside the optimality region is the volume of the optimality region divided by the volume of the search space; thus, this probability decreases exponentially as the dimensionality of the search space increases. Consequently, finding the global optimum becomes significantly harder as the dimensionality of the problem increases. One way to overcome this exponential increase in difficulty is to partition the search space into lower-dimensional subspaces, as long as the optimization algorithm can guarantee that it will be able to search every possible region of the search space. Such an approach has been applied, e.g., in the case of the PSO algorithm, yielding a number of cooperative approaches toward PSO (Asanga et al., 2004, Jie et al., 2008, Luo and Yi, 2008, Niu et al., 2008 and van den Bergh and Engelbrecht, 2004). Inspired by these results, in this paper, we try to address all the aforementioned issues of the BFO algorithm, by introducing a novel optimization scheme, based on synergetic swarms of foraging bacterial populations. The proposed algorithm, dubbed synergetic bacterial swarming optimization (SBSO) algorithm, combines the ideas of introducing a PSO-like swarming mechanism in the context of BSO, and using synergetic evolving populations working in different parts of the search space, so as to both enhance the convergence rates of the BFO algorithm, and make it less susceptible to the curse-of-dimensionality. Our novel approach is evaluated using a number of benchmark mathematical functions which cover a wide range of optimization problems from uni-modal and multi-modal to low and high dimensions. The remainder of this work is organized as follows: in Section 2, a brief presentation of the BFO and PSO algorithms is provided. In Section 3, the proposed SBSO algorithm is introduced. In Section 4, the experimental evaluation of the proposed algorithm using benchmark mathematical functions is conducted, and its performance is compared to PSO, BFO, and other rival methodologies. Finally, in the last section, we conclude this paper.

In this paper, we presented a novel evolutionary optimization methodology based on concepts drawn from the foraging mecha- nisms of bacterial populations. Our novel methodology consists an improvement of the bacterial foraging optimization (BFO) algo- rithm aiming to (i) speed-up the sluggish convergence of the BFO algorithm, resulting from the very dynamics of the bacterial forag- ing mechanisms; and (ii) ameliorate the curse-of-dimensionality vulnerability of the BFO algorithm, resulting in a high probability of the algorithm being trapped to local optima when dealing with high-dimensional optimization spaces. To resolve these issues, the proposed synergetic bacterial swarming optimization (SBSO) algorithm (i) introduces swarming mechanisms borrowed from the particle swarm optimization algorithm, which consist in the attraction of the bacterial populations by the best adapted bacterium; and (ii) the synergy between multiple bacterial popula- tions, each one searching in a different part of the optimization space, and exchanging information between each other to collabo- ratively reach the global optimum of the considered objective function. We evaluated the proposed algorithm using prominent bench- mark functions, and compared its performance to a number of rival methods, both BFO-based and following other evolutionary opti- mization paradigms, including PSO and genetic algorithms. As we have shown, the SBSO algorithm yields promising results, as it managed to outperform its opponents in all the considered cases. Indeed, it is remarkable how high an improvement the SBSOalgorithm managed to obtain compared to the standard BSO and BFA algorithms for the same number of function evaluations