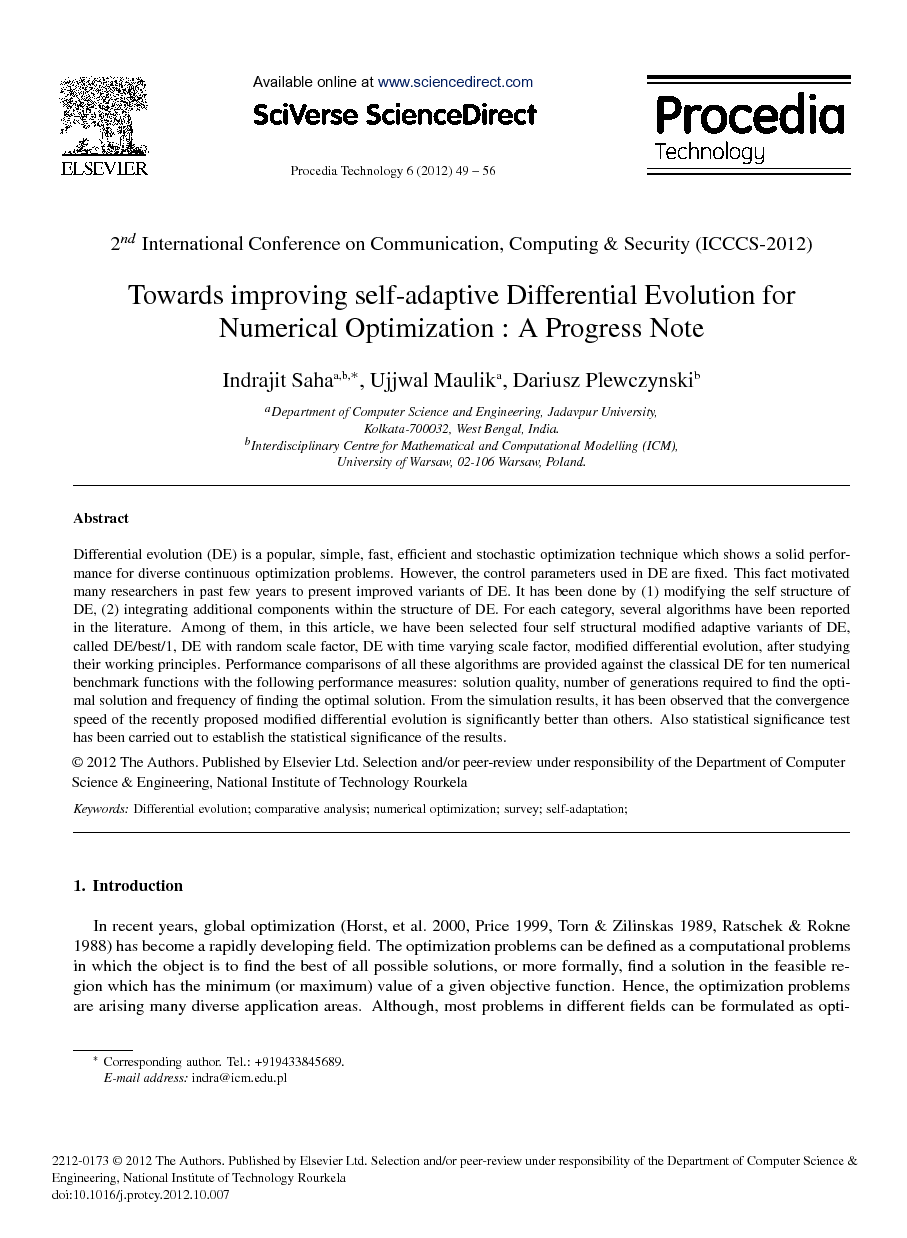 Differential evolution (DE) is a popular, simple, fast, efﬁcient and stochastic optimization technique which shows a solid performance for diverse continuous optimization problems. However, the control parameters used in DE are ﬁxed. This fact motivated many researchers in past few years to present improved variants of DE. It has been done by (1) modifying the self structure of DE, (2) integrating additional components within the structure of DE. For each category, several algorithms have been reported in the literature. Among of them, in this article, we have been selected four self structural modiﬁed adaptive variants of DE, called DE/best/1, DE with random scale factor, DE with time varying scale factor, modiﬁed differential evolution, after studying their working principles. Performance comparisons of all these algorithms are provided against the classical DE for ten numerical benchmark functions with the following performance measures: solution quality, number of generations required to ﬁnd the optimal solution and frequency of ﬁnding the optimal solution. From the simulation results, it has been observed that the convergence speed of the recently proposed modiﬁed differential evolution is signiﬁcantly better than others. Also statistical signiﬁcance test has been carried out to establish the statistical signiﬁcance of the results.

In recent years, global optimization (Horst, et al. 2000, Price 1999, Torn & Zilinskas 1989, Ratschek & Rokne 1988) has become a rapidly developing field. The optimization problems can be defined as a computational problems in which the object is to find the best of all possible solutions, or more formally, find a solution in the feasible region which has the minimum (or maximum) value of a given objective function. Hence, the optimization problems are arising many diverse application areas. Although, most problems in different fields can be formulated as opti-mization problems, the need of efficient optimization algorithm is ubiquitous for scientific community. Despite of its importance and the effort invested so far, the method for solving global optimization problems are not satisfactory enough. Therefore, the challenge is to determine an absolutely best solution for a general non-linear function with many variables and complex attributes attracts the attention of researchers. However, Evolutionary Algorithms (EAs) (Goldberg 1989, Kirkpatrik, et al. 1983, Eberhart & Shi 1995) are well acceptable to the scientific community due to their nature of simplicity and parallelization. In 1995, a new floating point encoded evolutionary algorithm for global optimization (Storn & Price 1995), called Differential Evolution (DE) (Storn & Price 1997, Price, et al. 2005), was proposed. Differential Evolution uses a special kind of differential operator, which invoked to create new offspring from parent vectors instead of classical mutation. DE algorithm is a stochastic optimization (Zabinsky 2003, Zhigljavsky & Zilinska 2008) method, maximizing or minimizing an objective function that can model the problem’s objectives while incorporating constraints (Storn 1995). The advantage of DE is its fast convergence while using a few control parameters. It also observed that DE performs better for non-linear constraint optimization (Price & Storn 1996, Price 1996). DE has been used in different field of engineering and science including in unsupervised image classification (Omran, et al. 2005, Maulik & Saha 2009, Maulik, et al. 2010, Saha, et al. 2009). However, DE does suffer from the problem of premature convergence to local optima. Also it takes large computational time for optimizing the computationally expensive objective functions. Hence, researchers from all over the globe have proposed plenty of DE variants (Neri& Tirronen 2010, Das & Suganthan 2011). However, some of the adaptive DE variants (Storn & Price 1997, Das, et al. 2005, Maulik & Saha 2009) are considered to review in this article. Among the reviewed DE variants, Modified Differential Evolution (MoDE) (Maulik & Saha 2009) uses different from of mutation than the classical DE. Here the mutation is carried out with three vectors, one is the local best, other is the global best which are adaptive in nature and third one is selected randomly. Also the process of mutation is controlled by the scale factor α. However, scheme DE/best/1 (Storn & Price 1997), DE with Random Scale Factor (DERSF) (Das et al. 2005) and DE with Time Varying Scale Factor (DETVSF) (Das et al. 2005) use traditional mutation operation of DE with adaptive control parameters. The performance of all the methods has been evaluated on a number of well-known benchmark functions and compared the speed of its convergence. Moreover, its effectiveness has also been evaluated in terms of the quality of solution, number of generations required to find the optimal solution and the frequency of finding the optimal solution. Finally, statistical significance test, called t-test, has been performed to show the relevance of the results.

This paper presents a short survey on recently proposed adaptive variants of DE, known as DE/best/1, DERSF, DETVSF and MoDE. A comparative study of these variants with classical DE has been demonstrated by showing the experimental results. The selected algorithms are according to our judgment efficient and respectively advanced. The reason for attempting to show this comparative study is due to the popularity of differential evolution. However, the classical DE can found to be slow and fail to detect solutions in high dimensional space. On the other hand, as shown in this paper, minor modifications can greatly enhance the performance differential evolution. The performance of these variants has been analyzed in terms of solution quality, speed of convergence and frequency of hitting the optimum for ten well-known benchmark test functions. A statistical significance test has also been conducted to show the effectiveness of the results. It has been noticed that the MoDE performs well in most of the cases. As a scope of further research, this short survey can be extended by incorporating other DE schemes. The multiobjective DE schemes can also be investigated. The authors are currently working in these directions.