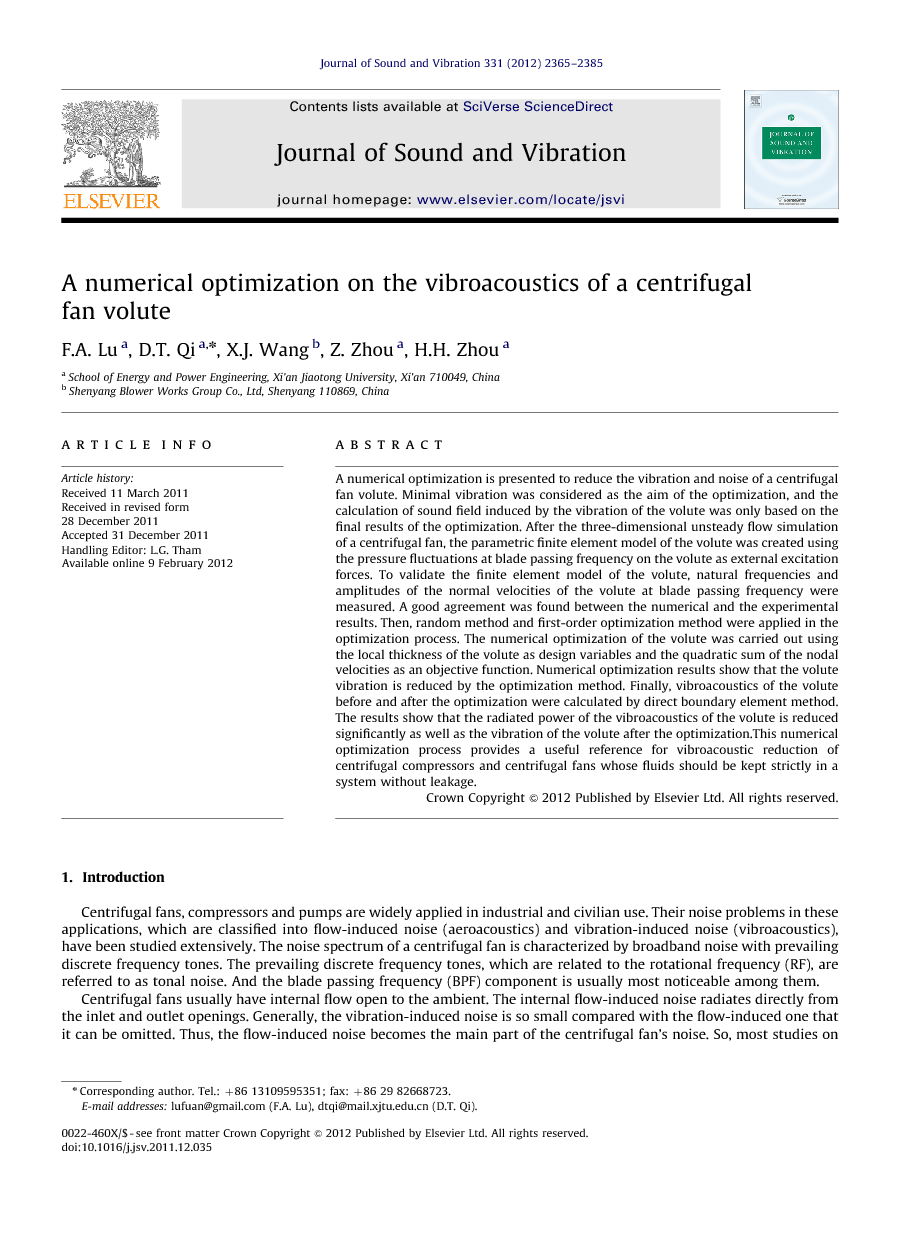 Centrifugal fans, compressors and pumps are widely applied in industrial and civilian use. Their noise problems in these applications, which are classified into flow-induced noise (aeroacoustics) and vibration-induced noise (vibroacoustics), have been studied extensively. The noise spectrum of a centrifugal fan is characterized by broadband noise with prevailing discrete frequency tones. The prevailing discrete frequency tones, which are related to the rotational frequency (RF), are referred to as tonal noise. And the blade passing frequency (BPF) component is usually most noticeable among them. Centrifugal fans usually have internal flow open to the ambient. The internal flow-induced noise radiates directly from the inlet and outlet openings. Generally, the vibration-induced noise is so small compared with the flow-induced one that it can be omitted. Thus, the flow-induced noise becomes the main part of the centrifugal fan's noise. So, most studies on fan noise focus on aeroacoustics, particularly on dipole sources. Neise [1] summarized that the primary source of fan noise was forces (dipole source) which were generated by the interactions between turbulent flow and objects such as blades, the vane and the volute. Feshe and Neise [2] showed that the low frequency broadband noise of a centrifugal fan was induced by the flow separation located on the shroud and the blade suction sides of the impeller. Tonal noise sources of a centrifugal fan were studied in Refs. [3] and [4], which indicated that the volute tongue region was the main source of tonal noise. Jeon and Duck [5] studied the volute influence on noise propagation of a centrifugal fan by putting a wedge near the centrifugal impeller and applying a newly developed Kirchhoff–Helmholtz boundary element method (BEM). Recently, with the development of computer science, numerical studies on sound radiation of turbomachinery have become possible through computational aeroacoustic techniques. Ballesteros-Tajadura et al. [6], Khelladi et al. [7], and Liu et al. [8]studied fan noise radiation through the following procedure: Unsteady flow fields were obtained first by the computational fluid dynamics (CFD) technology, then the aeroacoustic sources were extracted, and finally sound radiation to free field was calculated by FW-H equation ignoring the presence of the volute. Most of the current studies on fan noise have dealt with aeroacoustic problems. However, the noise is induced not only by internal turbulent flow but also by flow-induced structure vibration. In many fluid machinery, the fluid should be strictly kept in systems (e.g. petrochemical compressors) without any leakage. The rotor–stator interaction produces aerodynamic and acoustic pressure fluctuations. Generally, the amplitude of aerodynamic pressure fluctuation is much higher than that of the acoustic one, so the structural vibration contributed by acoustic pressure fluctuation can be neglected. Meanwhile, vibroacoustics radiated from the structure should be considered undoubtedly. Koopmann et al. [9] measured velocities on the casing surface of a fan and used BEM to compute the radiated sound power. Jiang et al. [10] quantitatively simulated the vibration and the noise of a pump's structure induced by internal flow. Study on the vibroacoustics of big fluid machinery, e.g. centrifugal compressors, is restricted by our numerical and experimental conditions. As a preliminary study, a volute's vibroacoustics induced by the internal flow of a centrifugal fan at BPF was simulated and optimized in this paper. A weakly coupling strategy from the unsteady flow field to the vibration, then to the noise radiation was realized. Unsteady Reynolds-averaged Navier–Stokes equations were applied to simulate the three-dimensional unsteady flow of the centrifugal fan. The pressure fluctuations on the volute were obtained and transferred to node forces. Then, Fast Fourier Transform was applied to these time series of node forces to extract blade passing frequency components. And a harmonic analysis of the volute loaded by the BPF component was carried out. To validate the finite element model of the volute, natural frequencies and the amplitudes of normal velocity of the volute vibration at BPF were measured and compared with the simulated ones. Random method and first-order optimization method were used to optimize the volute, in which the local thickness of the volute was taken as design variables and quadratic sum of the nodal velocities was used as objective function. Finally, direct boundary element method (DBEM) was used to simulate the volute vibroacoustics to validate that the optimized volute based on the reduction of vibration can also reduce the vibroacoustics.

In this study, a numerical optimization is presented to decrease the vibroacoustics of a centrifugal fan volute. To save the computational time in sound field calculation during each optimization iteration process, the quadratic sum of the nodal velocities instead of vibroacoustic simulation results was used as an objective function. We just used the vibroacoustic simulation to validate our optimization results. Some preliminary conclusions are obtained in this paper as follows: (1) The optimization process achieves the purpose of reducing the vibration of the centrifugal fan volute. Optimization results show that the three-part volute structure has an optimal thickness combination maintaining the volute mass constant, and the optimal design of the volute vibration can be achieved without any increase in material cost. Without strict constraint of the volute mass, the optimization can be further applied to get better thickness combination of the volute, thereby achieving better optimized vibration results. (2) The optimized volute thickness combination decreases the radiated noise power as well as the volute vibration. The more quadratic sum of the nodal velocities decreases, the more volute vibroacoustics decreases. (3) The optimized volute thickness based on BPF pressure with SKE is similar with that based on BPF pressure with LES. (4) The numerical results of the optimization process indicate one way that we can continue to explore. And it gives us a beneficial reference for the vibroacoustics reduction of centrifugal compressors and fans whose fluids should be strictly kept in system without any leakage