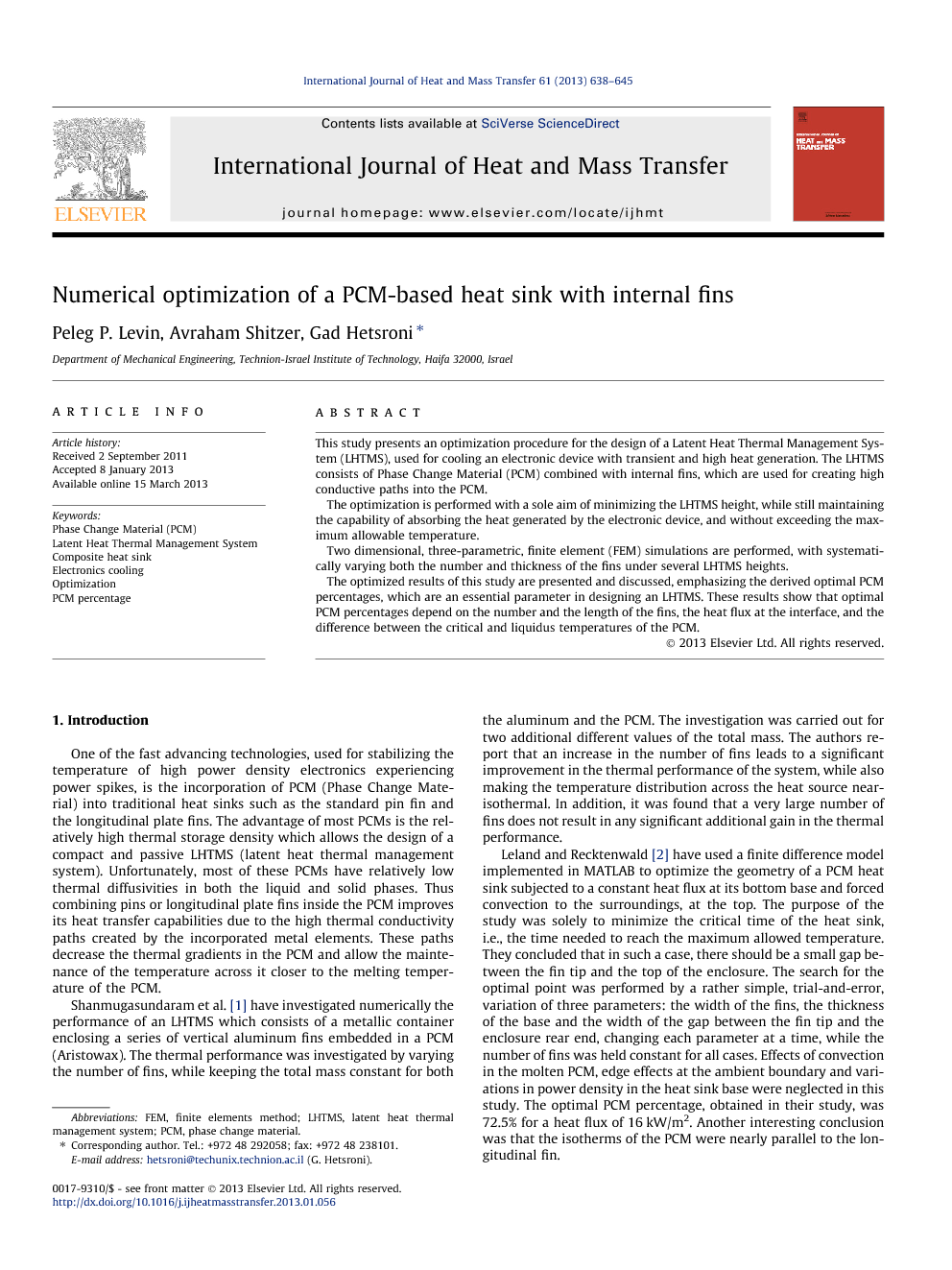 This study presents an optimization procedure for the design of a Latent Heat Thermal Management System (LHTMS), used for cooling an electronic device with transient and high heat generation. The LHTMS consists of Phase Change Material (PCM) combined with internal fins, which are used for creating high conductive paths into the PCM. The optimization is performed with a sole aim of minimizing the LHTMS height, while still maintaining the capability of absorbing the heat generated by the electronic device, and without exceeding the maximum allowable temperature. Two dimensional, three-parametric, finite element (FEM) simulations are performed, with systematically varying both the number and thickness of the fins under several LHTMS heights. The optimized results of this study are presented and discussed, emphasizing the derived optimal PCM percentages, which are an essential parameter in designing an LHTMS. These results show that optimal PCM percentages depend on the number and the length of the fins, the heat flux at the interface, and the difference between the critical and liquidus temperatures of the PCM.

The sole aim of the optimization performed in this study was to obtain the LHTMS minimum height, needed to fulfill the requirement for the critical time, by finding the optimal combination of PCM percentage, number of fins per unit system width and their length ratios. Neglecting convection, two-dimensional numerical solutions are used to obtain the critical times for the LHTMS for different Nusselt numbers representing various LHTMS heights. As expected, and demonstrated by other studies [1], [2], [3], [4], [5], [6], [7] and [8], incorporating fins in the LHTMS results in improved performance, while a very large number of fins does not lead to further gain in critical times. Thus, for a typical LHTMS, it is rather important to predicate the optimization procedure on the number of fins in order to avoid a reduced performance, on the one hand, and to minimize manufacturing costs, on the other. Results of this study are presented and discussed with the emphasis on the derived optimal PCM percentages. It is shown that these depend on the number and the length of the fins, on the heat flux at the interface, and on the difference between the critical and the liquidus temperatures. In particular, as the difference between the critical and liquidus temperatures increases, thinner fins are required, and thus optimal PCM percentages are expected to be higher. In general, it is apparent that optimal PCM percentages are inversely related to the range of temperatures expected in the PCM, at the moment critical temperature is reached at the interface. As the length of the fins and the interface heat flux are reduced, the temperature range inside the PCM is expected to decrease and thus the optimal PCM percentages are expected to increase. On the other hand, decreasing the number of fins should increase the temperature range and thus reduce the optimal PCM percentages. While full utilization of the PCM was required for an optimal design by previous authors [3] and [7], the findings of this study demonstrate that maximum critical times could be attained for effectiveness values of less than 100% – implying that not all the PCM is required to melt completely. For the optimal LHTMS design obtained in this study, once the critical temperature is reached at the interface, all the PCM has initiated melting, i.e., all of it passed its solidus temperature, while, on the other hand, only a portion of it (∼50%) has completed melting and passed the liquidus temperature. This contradiction with the requirement of complete PCM melting could, perhaps, be explained by the fact that the PCM used in this study has a relatively wide melting range, and thus the contribution of partially melting regions to the heat absorption in the PCM is rather significant. In addition, an assumption was made by previous authors [3] for the orientation of the isotherms which were assumed to be parallel to the longitudinal direction of the fins. As demonstrated, this assumption is not necessarily valid under the assumptions of this study.