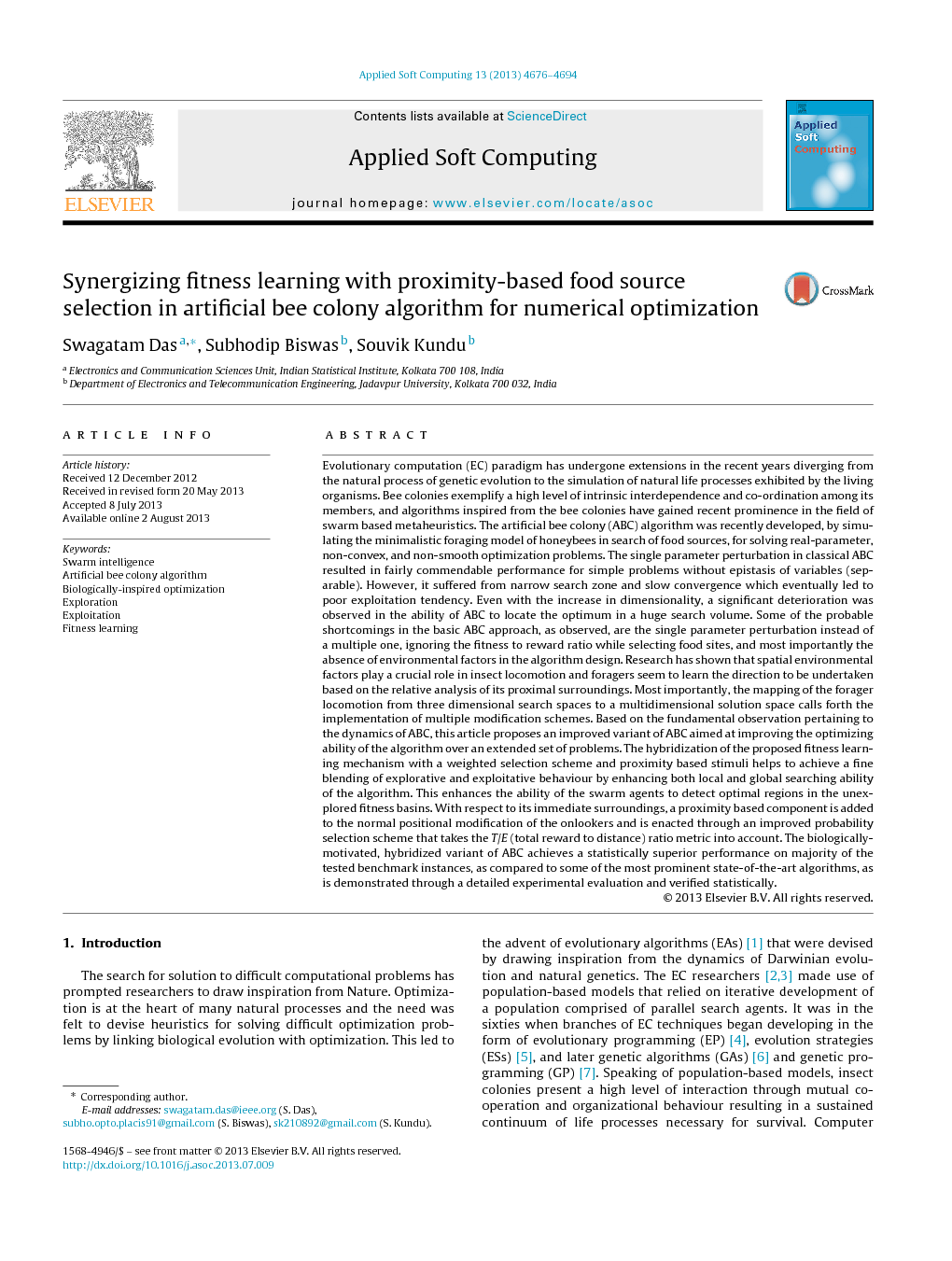 Evolutionary computation (EC) paradigm has undergone extensions in the recent years diverging from the natural process of genetic evolution to the simulation of natural life processes exhibited by the living organisms. Bee colonies exemplify a high level of intrinsic interdependence and co-ordination among its members, and algorithms inspired from the bee colonies have gained recent prominence in the field of swarm based metaheuristics. The artificial bee colony (ABC) algorithm was recently developed, by simulating the minimalistic foraging model of honeybees in search of food sources, for solving real-parameter, non-convex, and non-smooth optimization problems. The single parameter perturbation in classical ABC resulted in fairly commendable performance for simple problems without epistasis of variables (separable). However, it suffered from narrow search zone and slow convergence which eventually led to poor exploitation tendency. Even with the increase in dimensionality, a significant deterioration was observed in the ability of ABC to locate the optimum in a huge search volume. Some of the probable shortcomings in the basic ABC approach, as observed, are the single parameter perturbation instead of a multiple one, ignoring the fitness to reward ratio while selecting food sites, and most importantly the absence of environmental factors in the algorithm design. Research has shown that spatial environmental factors play a crucial role in insect locomotion and foragers seem to learn the direction to be undertaken based on the relative analysis of its proximal surroundings. Most importantly, the mapping of the forager locomotion from three dimensional search spaces to a multidimensional solution space calls forth the implementation of multiple modification schemes. Based on the fundamental observation pertaining to the dynamics of ABC, this article proposes an improved variant of ABC aimed at improving the optimizing ability of the algorithm over an extended set of problems. The hybridization of the proposed fitness learning mechanism with a weighted selection scheme and proximity based stimuli helps to achieve a fine blending of explorative and exploitative behaviour by enhancing both local and global searching ability of the algorithm. This enhances the ability of the swarm agents to detect optimal regions in the unexplored fitness basins. With respect to its immediate surroundings, a proximity based component is added to the normal positional modification of the onlookers and is enacted through an improved probability selection scheme that takes the T/E (total reward to distance) ratio metric into account. The biologically-motivated, hybridized variant of ABC achieves a statistically superior performance on majority of the tested benchmark instances, as compared to some of the most prominent state-of-the-art algorithms, as is demonstrated through a detailed experimental evaluation and verified statistically.

This research article delves into the simulation of biological life-processes of the bees by the surrounding environment and devises an analogous metaheuristics based on the life processes observed in the bee colony. A novel ABC variant proposed in this paper by interlinking of a learning mechanism with a modified perturbation scheme aided proximal affinity based approach that guides the bees towards promising regions of the solution space. Fitness learning helps to initiate a probable search direction for guiding the forager but during the search process the interaction of the forager with the neighbourhood is crucial and is enacted here through proximity based stimuli. A detailed experimental study establishes the justification in implementing our algorithm in varied benchmark set and real life functional scenarios incurring minimal computational expense. The proposed approach has its source in the optic flow of information in flying insects. The constant interpretation of geographical neighbourhood is mapped into the objective space which aids the honeybees in locomotion. During locomotion, honeybees link their geo-spatial neighbourhood to their associative learning and past memory while moving through intelligent search paths. The proposed FlABCps algorithm presents a novel foraging model by transforming simple ABC algorithm to a powerful swarm optimizer capable of functioning in varied terrain furnishing promising results. In particular, artificial evolution (AE) involves the study and implementation of the algorithms inspired by biological evolution and natural genetics. In a broader context it can also embrace the intelligent search algorithms driven by the mimicry of other natural phenomena like swarming and foraging of insect groups. Although ubiquitous in natural evolution, AE hardly involves self-adaptation or feedback of any type. AE approaches usually attempt to achieve an a priori and stationary objective and terminate as soon as they attain it. The integration of specific nature-inspired concepts into the algorithmic framework is advocated by an upcoming broader paradigm called computational evolution (CE) [97]. Evolutionary biologists are of the view that simulating biological characteristics will lead to development of new techniques that can deal with more challenging problems from the real world. The proposed FlABCps takes a step forward towards the CE paradigm by incorporating biological principles into artificial evolution based algorithmic design. It is believed that with the advent of technology and computational power, artificial systems will be modelled as a close replica of natural processes.