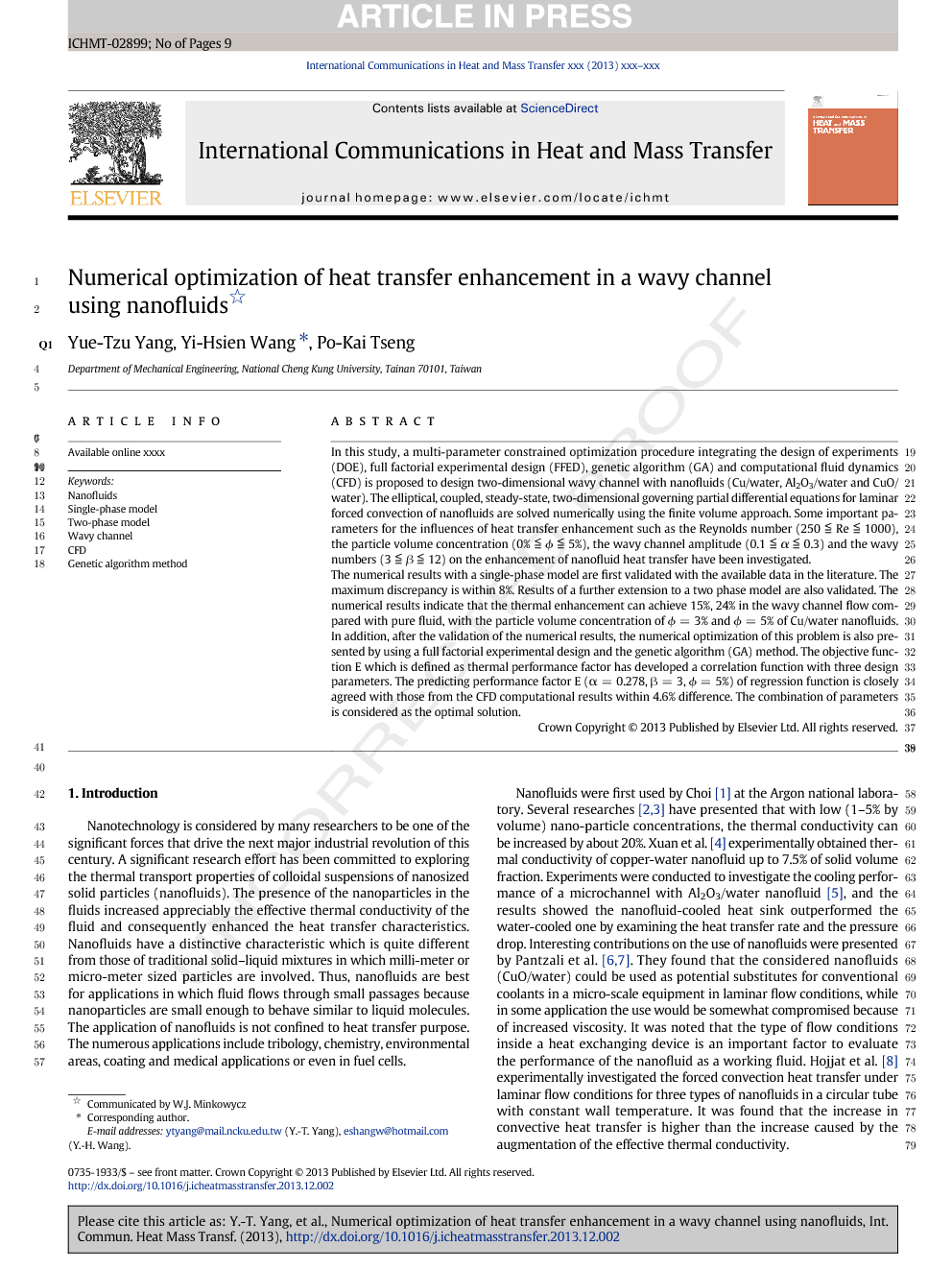 In this study, a multi-parameter constrained optimization procedure integrating the design of experiments (DOE), full factorial experimental design (FFED), genetic algorithm (GA) and computational fluid dynamics (CFD) is proposed to design two-dimensional wavy channel with nanofluids (Cu/water, Al2O3/water and CuO/water). The elliptical, coupled, steady-state, two-dimensional governing partial differential equations for laminar forced convection of nanofluids are solved numerically using the finite volume approach. Some important parameters for the influences of heat transfer enhancement such as the Reynolds number (250 ≦ Re ≦ 1000), the particle volume concentration (0% ≦ ϕ ≦ 5%), the wavy channel amplitude (0.1 ≦ α ≦ 0.3) and the wavy numbers (3 ≦ β ≦ 12) on the enhancement of nanofluid heat transfer have been investigated. The numerical results with a single-phase model are first validated with the available data in the literature. The maximum discrepancy is within 8%. Results of a further extension to a two phase model are also validated. The numerical results indicate that the thermal enhancement can achieve 15%, 24% in the wavy channel flow compared with pure fluid, with the particle volume concentration of ϕ = 3% and ϕ = 5% of Cu/water nanofluids. In addition, after the validation of the numerical results, the numerical optimization of this problem is also presented by using a full factorial experimental design and the genetic algorithm (GA) method. The objective function E which is defined as thermal performance factor has developed a correlation function with three design parameters. The predicting performance factor E (α = 0.278, β = 3, ϕ = 5%) of regression function is closely agreed with those from the CFD computational results within 4.6% difference. The combination of parameters is considered as the optimal solution.

A detailed numerical study is carried out to investigate nanofluid flow and heat transfer characteristics in a wavy channel. The parameters studied are the Reynolds number (Re = 250–1000), wave amplitude (α), wave numbers (β), and volume fraction (ϕ). Numerical results have been validated using reference's data reported in the literature, and a good agreement has been found. The effect of Reynolds number, nanoparticle volume fraction, wavy amplitude of the wavy wall on local friction coefficient, local Nusselt number, and average Nusselt number are presented and analyzed. Results show that the local friction coefficient for the nanofluid increases with an increase in the amplitude of wavy wall, while the addition of nanoparticles to the base fluid causes a slight increase in the friction coefficient for all Reynolds number considered. In addition, it was found that the enhancement in heat transfer mainly depends on the nanoparticle volume fraction, the amplitude of wavy wall, and the Reynolds number. Furthermore, single phase and two phase models predict almost identical hydrodynamic fields but very different thermal ones. Therefore, designed variables A and α can be suitably utilized to economize the optimization procedure in view of multi-variable, multi-objective, and multi-disciplinary design optimizations that require simultaneous considerations of multiple design variables and multiple performance objectives. In addition, the present study demonstrates the numerical multi-objective optimization of a wavy channel. Genetic algorithm (GA) is successfully employed for the optimization of wavy channel. This study illustrates an approach, which integrates the genetic algorithm (GA), response surface model (RSM), and CFD to provide a design problem. It is shown that the integrated process is a powerful tool for rapid design exploration and optimization.