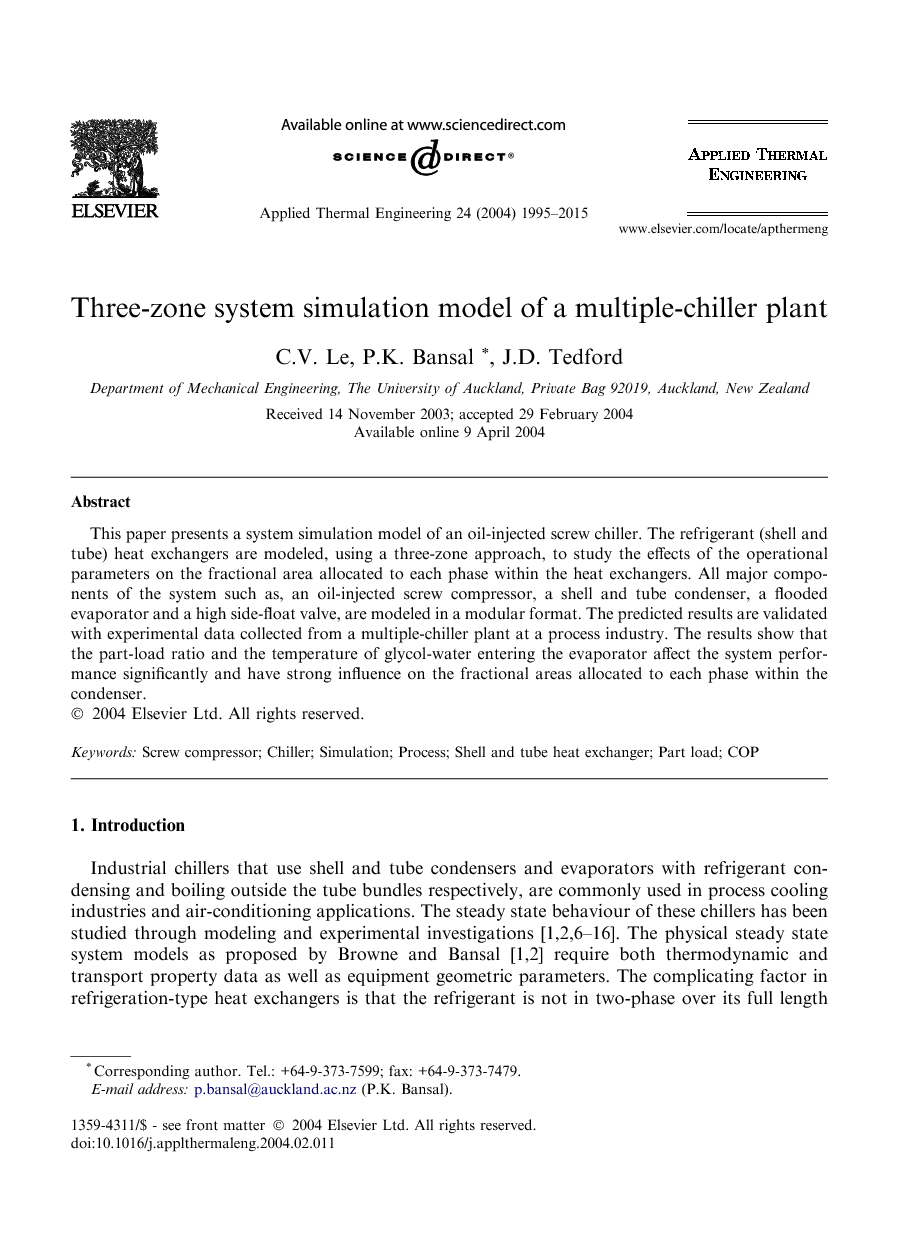 This paper presents a system simulation model of an oil-injected screw chiller. The refrigerant (shell and tube) heat exchangers are modeled, using a three-zone approach, to study the effects of the operational parameters on the fractional area allocated to each phase within the heat exchangers. All major components of the system such as, an oil-injected screw compressor, a shell and tube condenser, a flooded evaporator and a high side-float valve, are modeled in a modular format. The predicted results are validated with experimental data collected from a multiple-chiller plant at a process industry. The results show that the part-load ratio and the temperature of glycol-water entering the evaporator affect the system performance significantly and have strong influence on the fractional areas allocated to each phase within the condenser.

Industrial chillers that use shell and tube condensers and evaporators with refrigerant condensing and boiling outside the tube bundles respectively, are commonly used in process cooling industries and air-conditioning applications. The steady state behaviour of these chillers has been studied through modeling and experimental investigations [1], [2], [6], [7], [8], [9], [10], [11], [12], [13], [14], [15] and [16]. The physical steady state system models as proposed by Browne and Bansal [1] and [2] require both thermodynamic and transport property data as well as equipment geometric parameters. The complicating factor in refrigeration-type heat exchangers is that the refrigerant is not in two-phase over its full length of travel. Generally, evaporators operate with superheated outlets, while condensers with superheated inlets. In addition, most condensers operate with liquid subcooling at the outlets. In this case, the heat exchangers are divided into single-phase and two-phase regions that are analyzed separately. One important consideration is the allocation of the heat transfer fractional areas of the tube bundle to the two-phase and single-phase regions. Butterworth [3] suggested a method to evaluate the heat transfer area for a particular zone using an average overall heat transfer coefficient for each zone. Bansal and Rice [4] proposed a method for quick evaluation of fractional areas using the UA-LMTD approach. Tassou and Green [5] presented an approach using an effectiveness-NTU method to evaluate the fractional area for each region. Chan and Yu [6] developed a simulation model to study the control strategies of reciprocating water chillers. In this model, a one-zone modeling approach was used to simulate the heat exchangers and the overall heat transfer coefficients were determined by using empirical equations regressed from the chillers' performance data. Fu et al. [7] presented a simulation model to investigate the economizer system for screw liquid chillers. Their system model used a one-zone approach for the condenser and a two-zone model for the evaporator with the single-tube heat transfer coefficients obtained from the chillers' manufacturers handbook. Gordon et al. [8] presented a thermodynamic model of centrifugal chiller. The model was used as a diagnostic tool for chiller performance. Bansal et al. [9], [10], [11], [12], [13], [14] and [15] developed several models with different modeling approaches applicable to variety of heat exchangers and thermal systems such as for domestic refrigerators, heat pumps, dryers and liquid chillers. In these models, the overall heat transfer coefficients were calculated following thermal heat exchanger design methods. Earlier system models [6], [7], [8], [12], [13] and [14] were developed for either reciprocating or centrifugal chillers and only one model for screw chillers [7]. However, there does not seem to be any system model for oil-injected screw chillers in the open literature. This paper therefore, presents a system model using a three-zone modeling approach to simulate the heat exchangers for chillers of this type. The system model in this paper includes the following additional features that were missing in the earlier system models: • Only one of the four main inputs (i.e. refrigeration load; refrigerant mass flow rate; condensing temperature or evaporating temperature) are required by the system model, along with other inputs such as the inlet temperatures and mass flow rates of the heat transfer fluids in the heat exchangers. For practical reasons, this feature can be very useful in industrial environments. • The compressor model has captured the characteristics of the oil-injected screw chiller in which the injected oil can significantly reduce the amount of heat being rejected in the condenser. The amount of injected oil is precisely calculated with respect to the discharge temperature and the temperature of the injected oil exiting the oil cooler. The part-load efficiency of the chiller, which depends on the part-load ratio, is included in the prediction of the power consumption. This improves the accuracy of the predicted work input to the compressor. • The condenser has been modeled using a three-zone approach. This enables the determination of the fractional areas to be allocated to the single-phase and two-phase regions within the condenser. • The system model simulates the influence of operational parameters such as the entering temperature of glycol-water into the evaporator, the cooling water into the condenser and the compressor discharge temperature on the system performance and on the fractional areas allocated to each phase within the condenser of the oil-injected screw chiller.

The three-zone model simulation of an oil-injected screw liquid chiller presented in this paper predicted the system performance to within ±10%. The part-load ratio (PLR) and the temperature of glycol-water entering the evaporator affect the system performance considerably. They also have a strong influence on the fractional area allocated to each phase within the condenser. With a PLR greater than 0.5, the subcooled region in the condenser accounts for less than 2%, the two-phase region accounts for up to 73% and the superheated region occupies about 25% of the total area of the condenser. The effect of the compressor discharge temperature on the fractional area allocated to each region is very small. These conclusions are applicable to the particular system studied, however, they can also be applicable to other similar chiller plants having the similar load and operational characteristics. The system model can simulate many physical aspects of the oil-injected screw chiller, which results in the application of the model as a design and optimization tool to study the system performance and the configuration of multiple-chiller plants for process industries.