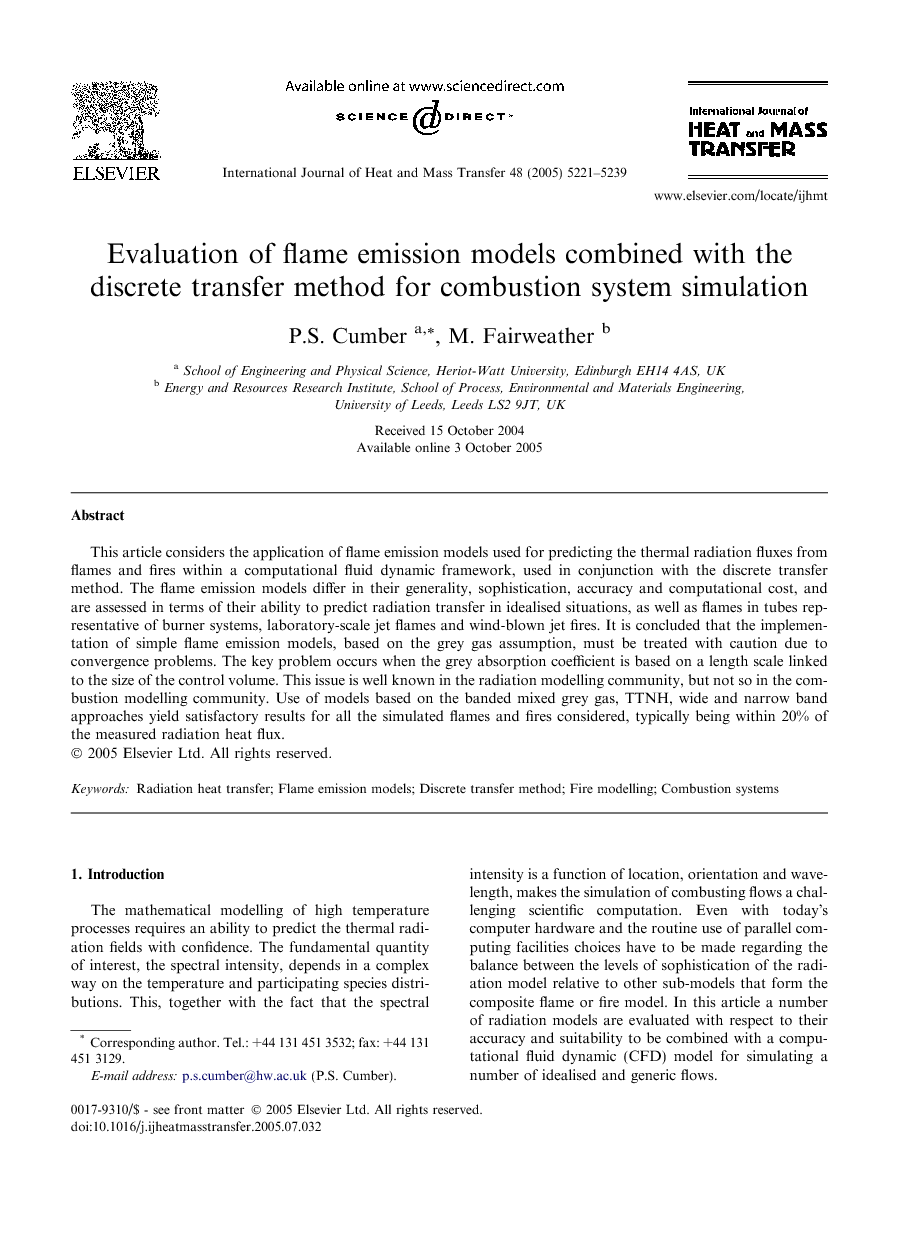 This article considers the application of flame emission models used for predicting the thermal radiation fluxes from flames and fires within a computational fluid dynamic framework, used in conjunction with the discrete transfer method. The flame emission models differ in their generality, sophistication, accuracy and computational cost, and are assessed in terms of their ability to predict radiation transfer in idealised situations, as well as flames in tubes representative of burner systems, laboratory-scale jet flames and wind-blown jet fires. It is concluded that the implementation of simple flame emission models, based on the grey gas assumption, must be treated with caution due to convergence problems. The key problem occurs when the grey absorption coefficient is based on a length scale linked to the size of the control volume. This issue is well known in the radiation modelling community, but not so in the combustion modelling community. Use of models based on the banded mixed grey gas, TTNH, wide and narrow band approaches yield satisfactory results for all the simulated flames and fires considered, typically being within 20% of the measured radiation heat flux.

Comparing the performance of the flame emission models for the jet flames/fires and the flame tube simulation, broadly speaking the speed-up characteristics are consistent and any differences are associated with the different finite-volume meshes used. In previous comparisons of the wide band model and the narrow band model, typically the wide band model is shown to be an order of magnitude faster with predictions of integrated intensity, and hence radiation flux, within 10% of the narrow band prediction. The disappointing speed-up of the wide band model is due to its use of an expression for the spectral transmissivity rather than the grey band assumption implemented by Edwards, necessary for use in a CFD framework. This means the spectral intensity distribution must be evaluated using a numerical quadrature rather than a relatively simple evaluation of a piecewise constant spectral distribution. This problem could be partially resolved by implementing the adaptive quadrature technique used successfully by Cumber [40] and [42] to evaluate the incident flux integral. Another factor is that the ray trace is included in the run-time of both models, tending to reduce the speed-up factor for the wide band model. One conclusion from this study is the implementation of simple participating media models within the discrete transfer method, based on the assumption of grey gas behaviour is not appropriate for non-homogeneous systems as radiation fluxes predicted using this approach do not converge as the representation of a non-homogeneous path is refined. In general, the banded grey gas, TTNH, wide and narrow band models yield satisfactory results for flame and fire applications, with an adequate level of agreement between the various models, and with experimental data. This article highlights the significant overhead of the ray trace used in the discrete transfer method, and in particular how the type of finite-volume mesh employed to represent the flame structure modifies the run-time of any radiation model implemented. For computations of fires obtained in conjunction with Cartesian meshes, the TTNH and banded grey gas models give speed-up factors, respectively, of one and two orders of magnitude relative to the wide and narrow band approaches. The performance of all models relative to the narrow band approach is, however, dramatically reduced when more complex, non-Cartesian meshes are employed. Results for the idealised test case indicate that only a relatively small number of homogeneous cells are required by some models to represent a non-homogeneous profile. This suggests that radiation calculations for fires, depending on the flame emission model, could be performed on meshes that are coarser than those generally used for the fluid dynamic computations. Use of the wide band model should be treated with some caution due to the large number of control volumes required to give converged results. This situation can be improved with some thought given to the computer implementation of the model in the context of a CFD framework, or through use of wide band scaling techniques. However, wide band-scaling techniques are likely to introduce a significant computational overhead even though fewer control volumes may be required to achieve finite-volume mesh independent predictions.