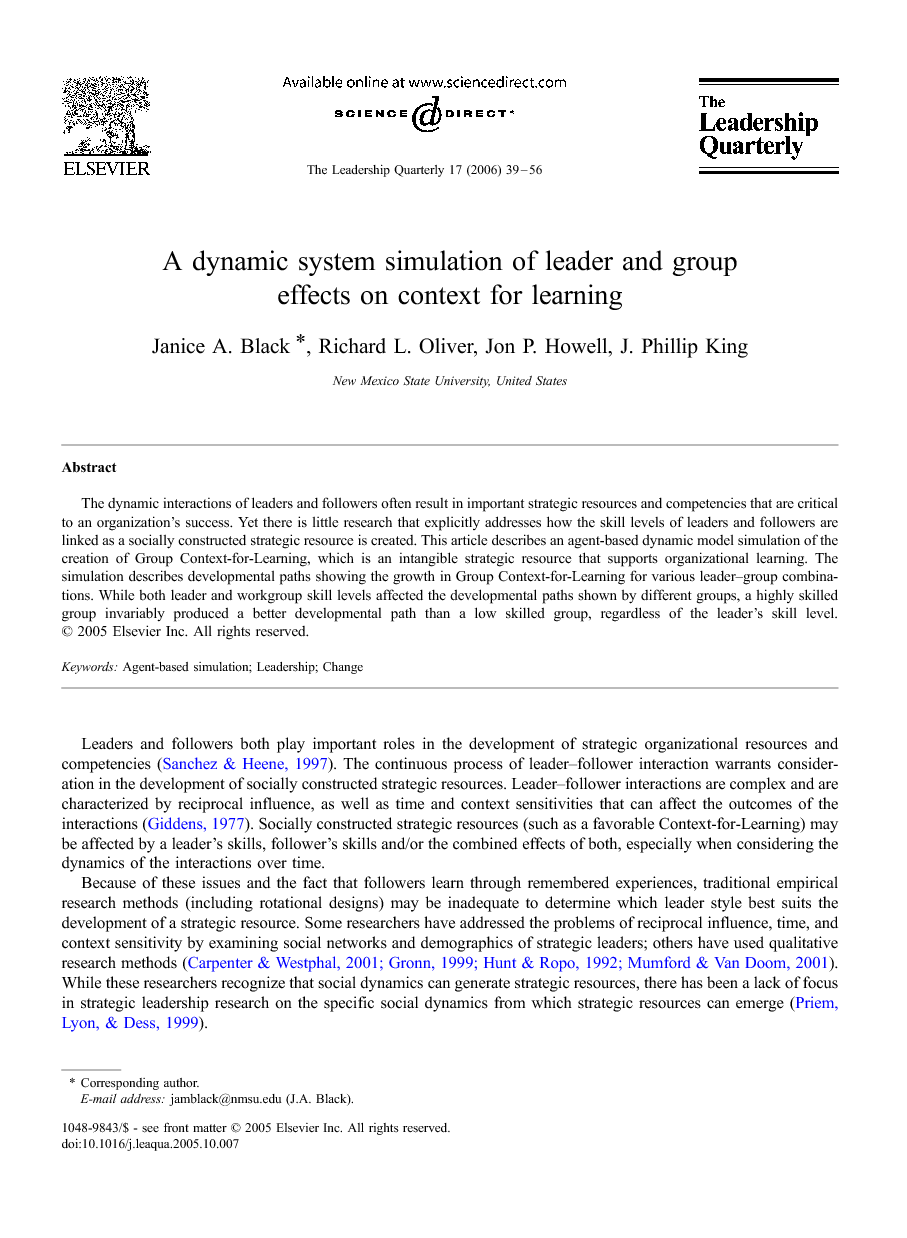 The dynamic interactions of leaders and followers often result in important strategic resources and competencies that are critical to an organization's success. Yet there is little research that explicitly addresses how the skill levels of leaders and followers are linked as a socially constructed strategic resource is created. This article describes an agent-based dynamic model simulation of the creation of Group Context-for-Learning, which is an intangible strategic resource that supports organizational learning. The simulation describes developmental paths showing the growth in Group Context-for-Learning for various leader–group combinations. While both leader and workgroup skill levels affected the developmental paths shown by different groups, a highly skilled group invariably produced a better developmental path than a low skilled group, regardless of the leader's skill level.

Leaders and followers both play important roles in the development of strategic organizational resources and competencies (Sanchez & Heene, 1997). The continuous process of leader–follower interaction warrants consideration in the development of socially constructed strategic resources. Leader–follower interactions are complex and are characterized by reciprocal influence, as well as time and context sensitivities that can affect the outcomes of the interactions (Giddens, 1977). Socially constructed strategic resources (such as a favorable Context-for-Learning) may be affected by a leader's skills, follower's skills and/or the combined effects of both, especially when considering the dynamics of the interactions over time. Because of these issues and the fact that followers learn through remembered experiences, traditional empirical research methods (including rotational designs) may be inadequate to determine which leader style best suits the development of a strategic resource. Some researchers have addressed the problems of reciprocal influence, time, and context sensitivity by examining social networks and demographics of strategic leaders; others have used qualitative research methods (Carpenter & Westphal, 2001, Gronn, 1999, Hunt & Ropo, 1992 and Mumford & Van Doom, 2001). While these researchers recognize that social dynamics can generate strategic resources, there has been a lack of focus in strategic leadership research on the specific social dynamics from which strategic resources can emerge (Priem, Lyon, & Dess, 1999). In this research, we have applied one of the most popular and powerful quantitative tools of complex system analysis—computational modeling (Carley, 1995). We applied this tool to help understand the dynamics involved in the leader's role in developing strategic competencies. Our model provides insight into the complex processes of workgroups in organizations in generating a strategic resource. Specifically, we modeled the impact of a leader's role behaviors on individual followers in a workgroup context as a socially constructed strategic resource is created. Leader role behaviors are modeled using Quinn's Competing Value Framework (Quinn, Faerman, Thompson, & McGrath, 2003). This framework includes behaviors that others have indicated are management oriented as well as those that have been identified as leadership oriented (Bedeian & Hunt, in press), and is consistent with our view that the two are complementary (Bass, 1985, Kotter, 1990 and Quinn, 1988). The socially created strategic resource that we examined is the Context-for-Learning (CFL), which is a strategic competence that both individually and collectively supports organizational learning (Black & Boal, 1997, Black et al., 2005 and Ghoshal & Bartlett, 1994). The CFL is a measure of an individual's perception of his/her ability to learn within his/her organization. The Group Context-for-Learning (GCFL) is the collective perception by a group of the members' ability to learn within an organization. GCFL is important in order for groups to demonstrate a capacity to change and a high level of performance (Black & Boal, 1997). The effects of follower–leader–group dynamics on the development of CFL have been addressed and modeled elsewhere (Black et al., 2005). While certain elements of CFL were found to be related to the leader, specific leader behaviors influencing the context over time were not studied. The research reported here combines Quinn's Competing Values Framework (CVF) and CFL to model the influence of leader's role behavior on individuals and groups over time.

The difficulty in doing research on strategic resources that are the result of social interactions has long been noted whenever the “holistic” nature of such resources has been discussed. The use of simulations to test the set of components and the logic of specific relationships of a causally ambiguous social resource has great potential. This article confirmed that specifics about the people involved influence the creation of a Context-for-Learning in a group. It demonstrates that even the best leader may have difficulty efficiently creating such resources if the correct set of people is not involved. The use of simulations may even facilitate research on the deployment of people and may result in the more effective or efficient development of strategic resources. We found support for our first hypothesis that each combination of leader and sets of followers had a distinct developmental path. In making this determination, two interesting side issues arose. The first one was that Low Groups lag High Groups by a considerable amount (the most effective path of the Low Group ends up about the same as the least effective path of the High Group). In addition we could see from Fig. 7 that the most effective leader, the Master Manager, with a Low Group performed about the same as the most ineffective leaders (the Drowning Workaholic and the Extreme Unproductive) with a High Group. This is an interesting system finding. It may be very difficult to disentangle the contributions of the leader and the group in such situations. Our second hypothesis was not supported. The ineffective leaders did not create flat or negative developmental paths in this simulation. They did have a wider variation in the developmental paths than did the effective leaders but none actually drove the CFL downwards. This may have been due to our assumption that learning always occurs and is always positive. This is an area that needs further examination. One thing that we can say for sure is that the performance associated with an ineffective leader is highly dependent upon the group that the leader heads. Our third hypothesis was supported. Effective leaders do enhance the performance of all groups. It was interesting to note that the variation among the developmental paths for effective leaders were much narrower than the variation among the developmental paths of ineffective leaders. Thus, a firm can have tighter expectations around what an effective leader might accomplish versus what an ineffective leader might accomplish. It is also interesting to speculate that if the firm rewarded leaders based on leadership skills, there would be a wider range of possible outcomes than if the firm rewarded leaders based on group skills (compare Fig. 9 with Fig. 5). Indeed, a low level group with an effective leader (Master Manager) may outperform a High Group with an ineffective leader (Extreme Unproductive). Using only leader skills or only group attainment may hide problem areas that should be addressed. Our fourth set of hypotheses was supported. The Master Manager was able to consistently outperform the other less balanced profiles. However, it is important also to note that the overall performance of the Master Manager was dependent upon the group.