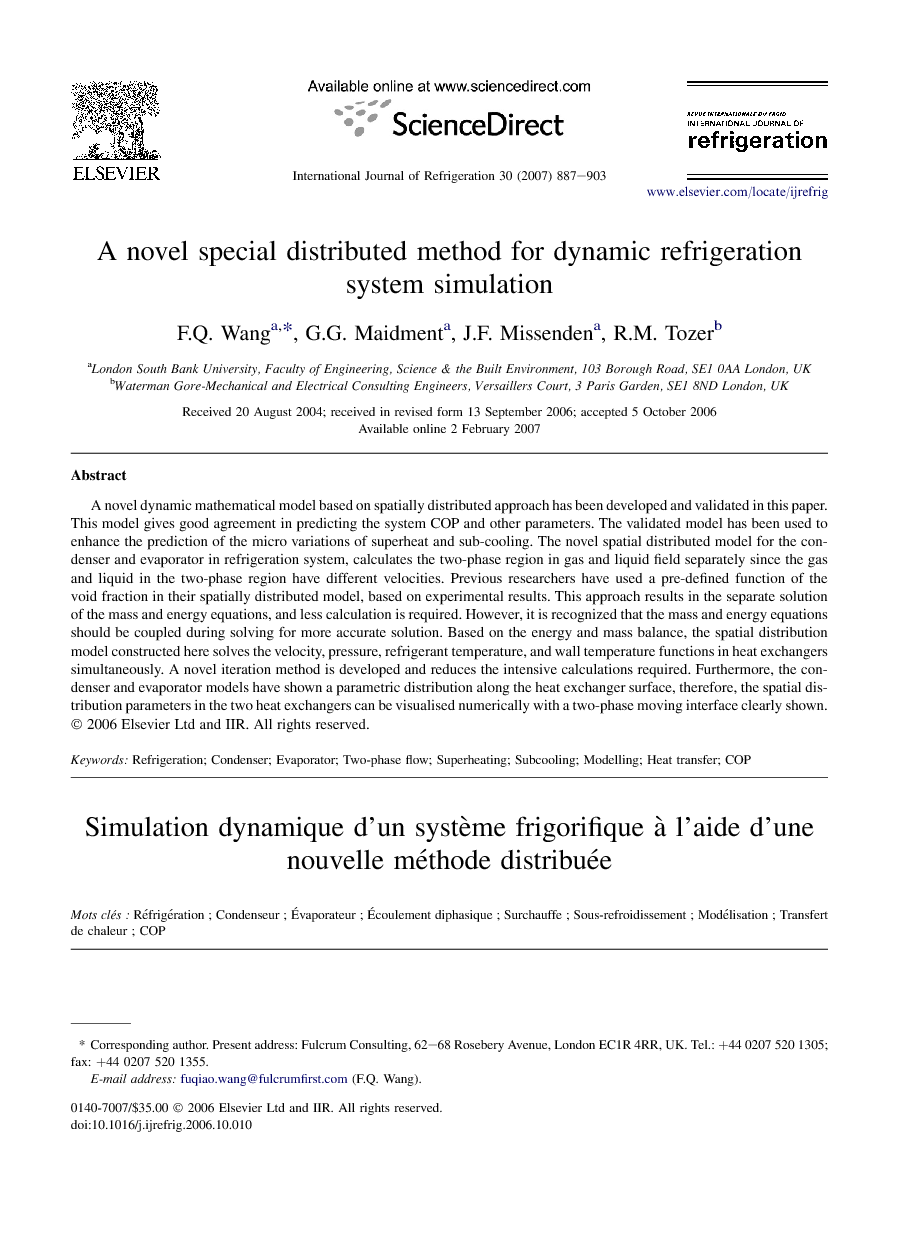 A novel dynamic mathematical model based on spatially distributed approach has been developed and validated in this paper. This model gives good agreement in predicting the system COP and other parameters. The validated model has been used to enhance the prediction of the micro variations of superheat and sub-cooling. The novel spatial distributed model for the condenser and evaporator in refrigeration system, calculates the two-phase region in gas and liquid field separately since the gas and liquid in the two-phase region have different velocities. Previous researchers have used a pre-defined function of the void fraction in their spatially distributed model, based on experimental results. This approach results in the separate solution of the mass and energy equations, and less calculation is required. However, it is recognized that the mass and energy equations should be coupled during solving for more accurate solution. Based on the energy and mass balance, the spatial distribution model constructed here solves the velocity, pressure, refrigerant temperature, and wall temperature functions in heat exchangers simultaneously. A novel iteration method is developed and reduces the intensive calculations required. Furthermore, the condenser and evaporator models have shown a parametric distribution along the heat exchanger surface, therefore, the spatial distribution parameters in the two heat exchangers can be visualised numerically with a two-phase moving interface clearly shown.

Generally, in refrigeration system simulation, heat exchanger models dealing with unsteady compressible two-phase flow fall into one of two categories: the lumped parameter approach or the spatially distributed approach [3]. The lumped parameter model (LPM) divides the heat exchangers into mainly three regions, the superheated gas region, the two-phase region, and the sub-cooling region. In each region, average values are used to represent the parameters of the whole region. The spatial distributed parameter method considers the parameters in each region to vary. The complexity of the spatially distributed approach is much greater than the lumped parameter model. The main merit of the spatial model is that the parameter distribution over distance is detailed and the moving two-phase interface is clearly defined. Therefore, the heat exchange processes in the refrigeration system can be displayed numerically but also more precise results can be produced. During transient operation, the refrigerant mass flow rate is continuously changing, which causes spatial variations in the refrigerant distribution in the system components as well as variable refrigerant states at the inlet and outlet of each component. It is seen that the mass distribution and other parameters within the heat exchangers are functions of time and space. Hence the spatially distributed model has been used by various researchers. The transient simulation of the refrigeration system was reviewed by a number of researchers and their key conclusions in relation to spatial distribution modelling is described below: Chi and Didion [1] simulated an air-cooled system with moving refrigerant phase boundaries, with each phase region treated as a counter-flow heat exchanger. Refrigerant flow in both heat exchangers is one-dimensional and homogenous. Internal resistances of metallic components were neglected. A direct expansion evaporator for water-cooling was simulated by Yasuda et al.'s [9] model. The refrigerant in each phase in the two-phase region was treated using lumped parameters, while the superheated region was simulated using a finite difference approach. The method considers the heat transfer distribution within the evaporator tube material, secondary fluid and refrigerant phases. This approach was used in order to be able to predict the evaporator exit condition precisely, especially when observing the hunting phenomenon. In the evaporative region a mean void fraction was determined from the Hughmark correlation, assuming uniform heat flux. Macarthur [4] modelled refrigerant heat exchangers on a finite-volume basis by discretizing the length of the heat exchanger into phase-independent control volumes and applying the mass and energy balances on the refrigerant, tube material and secondary fluid in each control volume. In contrast to the condenser, the evaporator is modelled as a two-phase region, the liquid and vapour being handled separately while being in equilibrium. Heat from the secondary fluid passes exclusively to the liquid refrigerant to cause evaporation. Mass and energy balances on the vapour and liquid phases are linked through the evaporation rate. The single-phase region in the evaporator was modelled in the same way as in the condenser. In Sami et al.'s [6] model, the total system is divided into a number of lumped parameter control volumes. The condenser is modelled as a combination of the three different phase regimes: the fully superheated, the two-phase and the sub-cooled. The vapour and liquid phases in each regime were modelled by a set of coupled mass and energy balances. Rossi and Braun [5] modelled the heat exchanger on a fixed-boundary, finite difference basis. Elemental mass and energy balances are written for each element of the heat exchanger, including the heat transfer equations between the refrigerant, the tube-wall and the air. The momentum equation does not appear as the pressure drops are considered negligible. The heat exchanger model uses the inlet and outlet refrigerant flow-rates and the inlet enthalpy as boundary conditions. The air side heat transfer is modelled differently for heat transfer in the condenser and evaporator. For the condenser the dry analysis was based on the temperature difference between the wall and the air, while for the evaporator the wet analysis is based on the enthalpy potential between the refrigerant and the air. An effectiveness-NTU formulation was employed in the analysis. Svensson [7] modelled a condenser consisting of two zones: the condensing and the sub-cooling, both of which are assumed to have fixed volumes. Energy and mass balances are obtained for each of these zones as a set of coupled ordinary differential equations. These are then combined to give an equation for the pressure difference in terms of: tube-wall temperature, incoming mass flow rate and saturated refrigerant properties. The tube-wall and the water volume are discretized into ‘n’ volumes in the condensing zone and 1 volume in the sub-cooling zone and finite difference forms of the energy balance equations are used. For each of these ‘n’ volumes, the refrigerant side conditions are considered identical. Most researchers have previously used a pre-defined function of the void fraction in their spatially distributed model, based on experimental results. This approach results in the separate solution of the mass balance and energy equations, and less calculations are required. However, it is recognized that the mass and energy equations should be coupled during solution. The spatial distribution model constructed here is based on the principle of energy and mass balances, to solve the velocity, pressure, temperature, and wall temperature functions in heat exchangers simultaneously.

A spatial distribution model in two heat exchangers has been presented in this paper. The complexity of the model is much greater than the lumped parameter model. The main merit of the spatial model is that the parameter distribution over distance is detailed and the moving two-phase interface is clearly defined. This would allow visualisation of the modelled system, useful both in design and optimisation. As the model has been experimentally validated it stands alongside previous lumped parameter models. For the future, three-way comparisons between the two modelling methods and experiments would be interesting. Most researchers have previously used a pre-defined function of the void fraction in their spatially distributed model, based on experimental results. This approach results in the separate solution of the mass balance and energy equations, and less calculations are required. However, it is recognized that the mass and energy equations should be coupled during solving for more accurate solution. The spatial distribution model constructed here is based on the principle of energy and mass balance to solve the velocity, pressure, temperature and wall temperature functions in heat exchangers simultaneously. Although more calculations are required, this method presents a clearer understanding of two-phase flow region. If the initial and boundary conditions are accurate, better precision should be achieved in the simulation. The lumped parameter model gives an energy balance for each section namely superheat region, two-phase region and sub-cooling region. This means there are only a maximum of three mesh points in each heat exchanger. The spatial distribution model gives more mesh points in heat exchangers and therefore the solution should be more accurate. The results show that mesh size is one factor in the model's performance. By examining the results from the two models, it is believed that the results depend on the following factors: (1) The accuracy of heat transfer coefficient used; (2) The boundary conditions; (3) The initial conditions for dynamic model; and (4) The physical model assumptions. Although a number of heat transfer coefficients are available, there are some discrepancies and more work is needed in this area. The models used here are not reliable enough to predict variable superheat. This may be due to the effect of oil on the superheat exchanger surface or the influence of droplets in the compressor suction. Iteration is the only procedure for numeric solution in system modelling; a skilled iteration method will reduce computation time. A novel iteration method for reducing computation time has been proposed here.