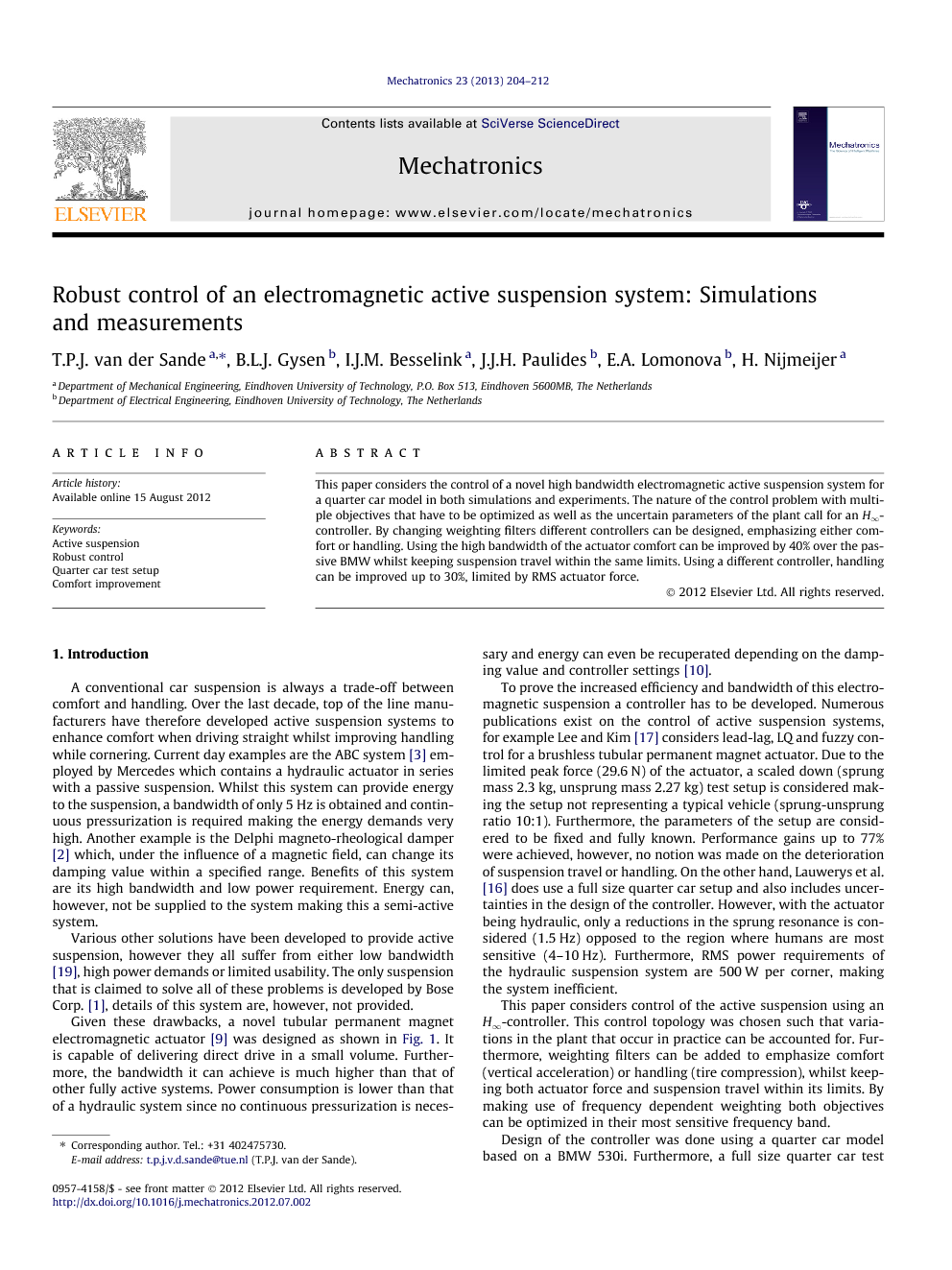 This paper considers the control of a novel high bandwidth electromagnetic active suspension system for a quarter car model in both simulations and experiments. The nature of the control problem with multiple objectives that have to be optimized as well as the uncertain parameters of the plant call for an H∞-controller. By changing weighting filters different controllers can be designed, emphasizing either comfort or handling. Using the high bandwidth of the actuator comfort can be improved by 40% over the passive BMW whilst keeping suspension travel within the same limits. Using a different controller, handling can be improved up to 30%, limited by RMS actuator force.

A conventional car suspension is always a trade-off between comfort and handling. Over the last decade, top of the line manufacturers have therefore developed active suspension systems to enhance comfort when driving straight whilst improving handling while cornering. Current day examples are the ABC system [3] employed by Mercedes which contains a hydraulic actuator in series with a passive suspension. Whilst this system can provide energy to the suspension, a bandwidth of only 5 Hz is obtained and continuous pressurization is required making the energy demands very high. Another example is the Delphi magneto-rheological damper [2] which, under the influence of a magnetic field, can change its damping value within a specified range. Benefits of this system are its high bandwidth and low power requirement. Energy can, however, not be supplied to the system making this a semi-active system. Various other solutions have been developed to provide active suspension, however they all suffer from either low bandwidth [19], high power demands or limited usability. The only suspension that is claimed to solve all of these problems is developed by Bose Corp. [1], details of this system are, however, not provided. Given these drawbacks, a novel tubular permanent magnet electromagnetic actuator [9] was designed as shown in Fig. 1. It is capable of delivering direct drive in a small volume. Furthermore, the bandwidth it can achieve is much higher than that of other fully active systems. Power consumption is lower than that of a hydraulic system since no continuous pressurization is necessary and energy can even be recuperated depending on the damping value and controller settings [10]. To prove the increased efficiency and bandwidth of this electromagnetic suspension a controller has to be developed. Numerous publications exist on the control of active suspension systems, for example Lee and Kim [17] considers lead-lag, LQ and fuzzy control for a brushless tubular permanent magnet actuator. Due to the limited peak force (29.6 N) of the actuator, a scaled down (sprung mass 2.3 kg, unsprung mass 2.27 kg) test setup is considered making the setup not representing a typical vehicle (sprung-unsprung ratio 10:1). Furthermore, the parameters of the setup are considered to be fixed and fully known. Performance gains up to 77% were achieved, however, no notion was made on the deterioration of suspension travel or handling. On the other hand, Lauwerys et al. [16] does use a full size quarter car setup and also includes uncertainties in the design of the controller. However, with the actuator being hydraulic, only a reductions in the sprung resonance is considered (1.5 Hz) opposed to the region where humans are most sensitive (4–10 Hz). Furthermore, RMS power requirements of the hydraulic suspension system are 500 W per corner, making the system inefficient. This paper considers control of the active suspension using an H∞-controller. This control topology was chosen such that variations in the plant that occur in practice can be accounted for. Furthermore, weighting filters can be added to emphasize comfort (vertical acceleration) or handling (tire compression), whilst keeping both actuator force and suspension travel within its limits. By making use of frequency dependent weighting both objectives can be optimized in their most sensitive frequency band. Design of the controller was done using a quarter car model based on a BMW 530i. Furthermore, a full size quarter car test setup has been built that describes the vertical dynamics of a vehicle. Multiple suspension struts can be fitted, thereby making it possible to compare the suspension Strut of the BMW with the controlled electromagnetic suspension. It will be shown that a 41% improvement in comfort can be achieved in the frequency range of highest human sensitivity (4–10 Hz), limited by the available suspension travel. Handling can be improved by 31%, limited by the available RMS actuator force. The outline of the paper is as follows. In Section 2 the system model will be discussed which consists of an introduction to the active suspension, the quarter car model that will be used for simulations and the road description. After this the main control problem will be presented in detail. In Section 4 the full size test setup will be shown. Design of the controller will be explained in Section 5. Results of the controllers designed can be seen in Section 6. Finally, conclusions are drawn in Section 7.

A robust controller is developed for an electromagnetic suspension system using a quarter car model. Parametric uncertainties are included in the quarter car model accounting for possible variations in the plant. Frequency dependent weighting filters are chosen such that either maximal comfort or best handling is achieved given the constraints of maximum suspension travel and actuator force. Stability of the controller is shown using the structured singular value which was smaller than 1 for all eleven controllers. Measurements show that a 41% improvement in comfort limited by suspension travel or a 31% improvement in handling determined by maximum RMS actuator force can be achieved with the active suspension compared to the passive BMW suspension. When driving over a three centimeter speed bump, comfort can be improved by 53%. Differences between measurements and simulations are explained by static friction in the active suspension. Finally, power consumption is 80% less than a hydraulic system.