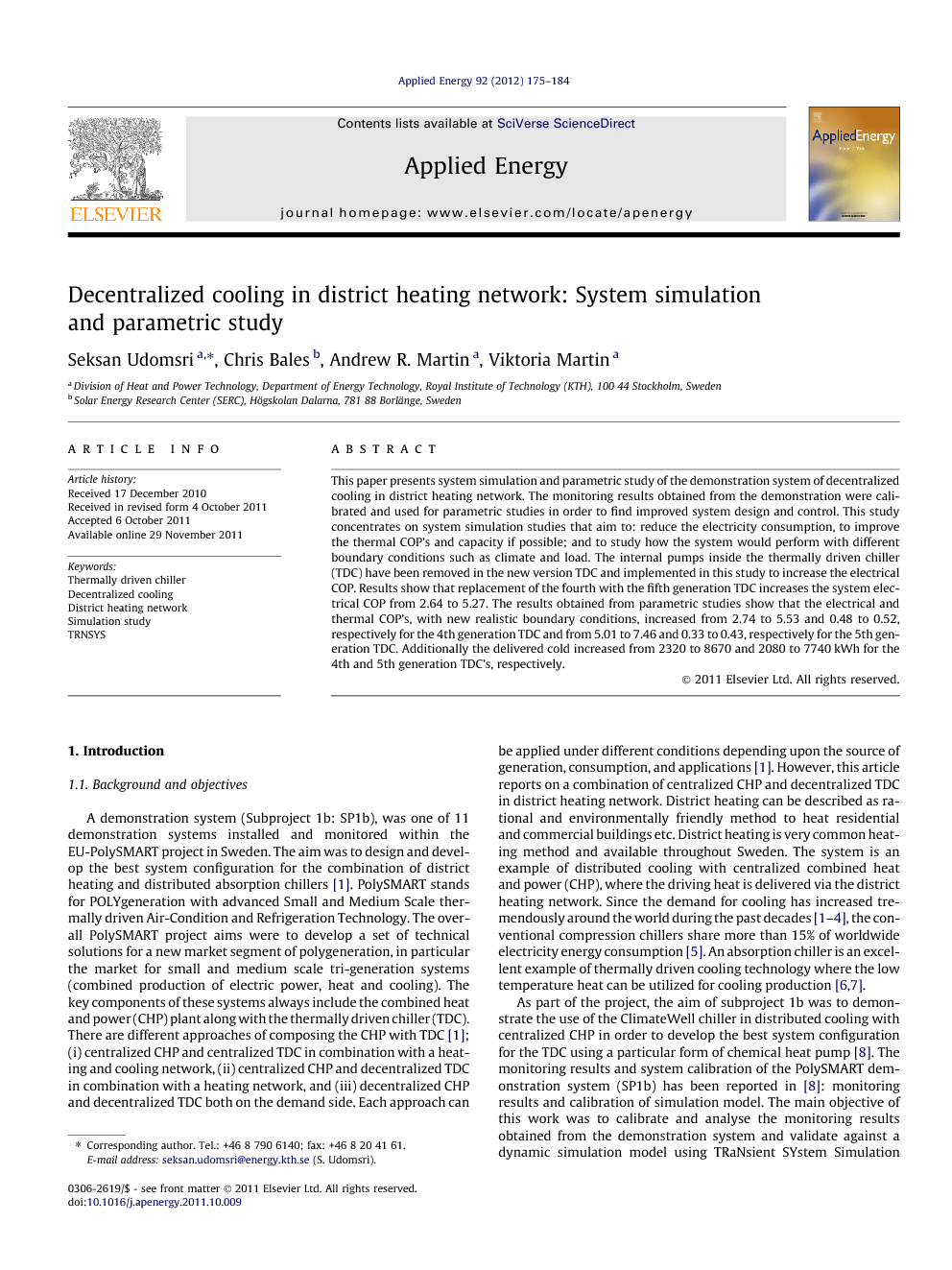 This paper presents system simulation and parametric study of the demonstration system of decentralized cooling in district heating network. The monitoring results obtained from the demonstration were calibrated and used for parametric studies in order to find improved system design and control. This study concentrates on system simulation studies that aim to: reduce the electricity consumption, to improve the thermal COP’s and capacity if possible; and to study how the system would perform with different boundary conditions such as climate and load. The internal pumps inside the thermally driven chiller (TDC) have been removed in the new version TDC and implemented in this study to increase the electrical COP. Results show that replacement of the fourth with the fifth generation TDC increases the system electrical COP from 2.64 to 5.27. The results obtained from parametric studies show that the electrical and thermal COP’s, with new realistic boundary conditions, increased from 2.74 to 5.53 and 0.48 to 0.52, respectively for the 4th generation TDC and from 5.01 to 7.46 and 0.33 to 0.43, respectively for the 5th generation TDC. Additionally the delivered cold increased from 2320 to 8670 and 2080 to 7740 kWh for the 4th and 5th generation TDC’s, respectively.

This simulation study has been based on the boundary conditions for the SP1b demonstration plant of the PolySMART project with distributed cooling supplied via district heating network from a centralized CHP. The system simulation model was calibrated in a three stage process against the monitored data. The final calibration stage showed very good agreement with the monitored data for a five day period in terms of both thermal and electrical energy quantities as well as running times of the pumps. However, the performance figures for this base case system for the complete cooling season of mid-May to mid-September were significantly better than those for the monitoring data. This was attributed to longer periods when the monitored system was not in operation and due to a control parameter that hindered cold delivery at certain times. The simulations showed that the electrical COP of the system can be improved by the following measures: • Installation of high efficiency pumps: increase from 2.13 to 2.64. • Reduction of the set point for the return temperature of the dry cooler from 27 to 24 °C: 2.64 to 2.74. Reducing the flow rate in the external circuits caused a reduction in the electrical COP. Replacement of the 4th generation TDC with the 5th generation TDC that has lower pressure drops and very little power consumption internally resulted in an increase of the system electrical COP from 2.64 to 5.27. However, this also resulted in a reduced thermal COP from 0.45 to 0.30. As the reference system is a compression chiller with a COP of 2.7 [14], all systems that have an electrical COP of less than 2.7 have a higher electricity consumption than the reference system. The best case with 4th generation TDC and the boundary condition for the SP1b system had an electrical COP of 2.74. A number of parametric studies were carried out to determine the performance for a range of different boundary conditions. These showed that: • The 4th generation TDC has better thermal COP but worse electrical COP than the 5th generation TDC in all the studied cases. • Increased operation time due to reduced cooling balance temperature and allowing cooling to be supplied at any time of the day, every day (24/7), leads to a significant increase in delivered cold as well as improved electrical and thermal COP’s. • The electrical COP increases if the return temperature from the cooling distribution has a higher temperature. This effect is more pronounced for the 5th generation TDC, for which the thermal COP also increases. In contrast the 4th generation machine has a thermal COP that is more or less independent of this temperature level. • Increased driving temperature increases significantly the electrical and thermal COP of the 5th generation TDC as well as delivered cold. There is only a small increase for the 4th generation TDC. • For the following realistic boundary conditions (base case in parentheses), the electrical and thermal COP’s increased from 2.74 to 5.53 and 0.483 to 0.522, respectively for the 4th generation TDC and from 5.01 to 7.46 and 0.327 to 0.432, respectively for the 5th generation TDC. Additionally the delivered cold increased from 2320 to 8670 and 2080 to 7740 kWh for the 4th and 5th generation TDC’s, respectively. – Driving temperature of 90 °C (77.7 °C), cooling balance temperature of 10 °C (13 °C), return from cooling distribution of 14 °C (13 °C) and with possible operation 24/7 (office hours from 06–17). Finally it was shown that the thermal COP does not vary with climate but that the electrical COP is lower for hotter climates due to increased use of the dry cooler fan. The delivered cold however, is much greater for the hotter climates. It was also shown that for the more appropriate boundary conditions, the differences in the performance figures for the 4th and 5th generation TDC’s was much smaller and that for both of them the electrical COP was significantly higher than that of the base case system. With this system improvement especially electrical COP, it is apparent to conclude that there is a potential to employ decentralized cooling in district heating network supplied by heat from cogeneration. Therefore, expanding cogeneration towards trigeneration can certainly augment the energy supply from cogeneration for summer months in Europe. Utilizing waste heat for cooling production could further reduce the high demand for electricity from compression chillers, while improving overall efficiency of cogeneration plants and reducing the environmental impact in parallel. Here in the summer the cogeneration unit generates electricity and heat where the heat can be distributed in terms of steam and district heating in the district heating network that can be employed further in decentralized cooling systems. It is a very attractive approach where the cooling is provided on the demand side and consumers can deploy the system themselves to produce cooling by using heat from existing district heating networks. The main obstacle of this approach could be the price for the whole system, especially for absorption chiller. Further developments and improved system COP could partly solve this problem. It is however necessarily for the future work to find improved system performance both thermal and electrical COP’s using different absorption chillers; giving an opportunity to introduce different absorption chillers to compare with existing chiller. Beyond this study, it would be of great interest to see if the results obtained from this research and demonstration could be applied (with some modification) to tropical locations, where the largest cooling demand (year-round cooling) has always been found. It would be of great interest to see a comparison with continuous full load where cooling needs all year-round, yielding the results on the maximum possible cold production. Experiences learned from this demonstration will be used to modify and design a proper or better system in Europe as well as in the tropical locations. Hence, there is a distinct possibility of suggesting pathways for significant greenhouse gas reductions and possibly reducing the impact of climate change on developing countries in the decades to come.