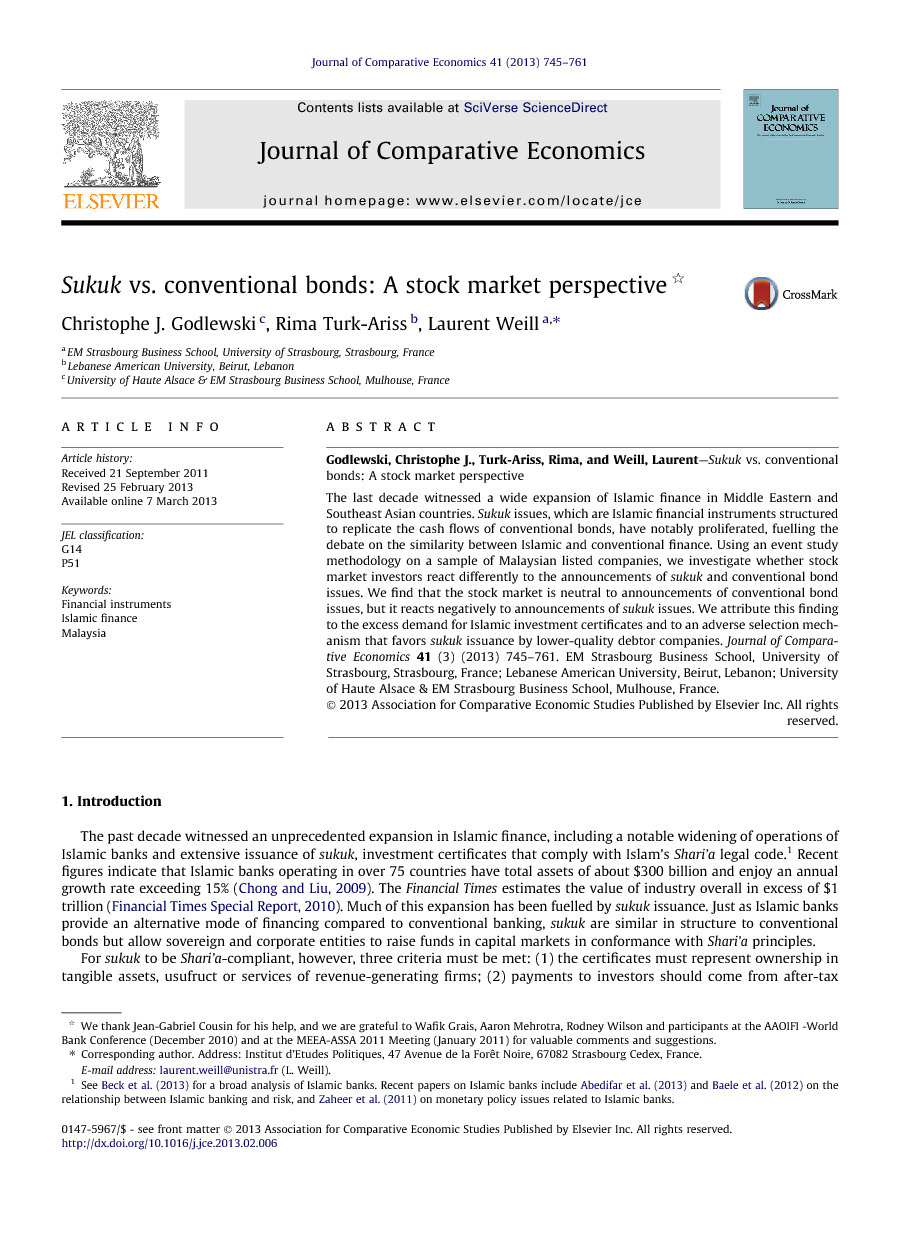 The last decade witnessed a wide expansion of Islamic finance in Middle Eastern and Southeast Asian countries. Sukuk issues, which are Islamic financial instruments structured to replicate the cash flows of conventional bonds, have notably proliferated, fuelling the debate on the similarity between Islamic and conventional finance. Using an event study methodology on a sample of Malaysian listed companies, we investigate whether stock market investors react differently to the announcements of sukuk and conventional bond issues. We find that the stock market is neutral to announcements of conventional bond issues, but it reacts negatively to announcements of sukuk issues. We attribute this finding to the excess demand for Islamic investment certificates and to an adverse selection mechanism that favors sukuk issuance by lower-quality debtor companies.

The past decade witnessed an unprecedented expansion in Islamic finance, including a notable widening of operations of Islamic banks and extensive issuance of sukuk, investment certificates that comply with Islam’s Shari’a legal code. 1 Recent figures indicate that Islamic banks operating in over 75 countries have total assets of about $300 billion and enjoy an annual growth rate exceeding 15% ( Chong and Liu, 2009). The Financial Times estimates the value of industry overall in excess of $1 trillion ( Financial Times Special Report, 2010). Much of this expansion has been fuelled by sukuk issuance. Just as Islamic banks provide an alternative mode of financing compared to conventional banking, sukuk are similar in structure to conventional bonds but allow sovereign and corporate entities to raise funds in capital markets in conformance with Shari’a principles. For sukuk to be Shari’a-compliant, however, three criteria must be met: (1) the certificates must represent ownership in tangible assets, usufruct or services of revenue-generating firms; (2) payments to investors should come from after-tax profits; and (3) the value repaid at maturity should reflect the current market price of the underlying asset − not the original amount invested. Recently, a debate was ignited after a leading Shari’a scholar announced that most sukuk do not comply with Shari’a because they are in violation with at least one of the three principles, effectively making them no different from conventional bonds. 2 Similarly, Miller et al. (2007) and Wilson (2008) contend that sukuk instruments are generally structured along Western rules of securitization and do not constitute financial innovation. In contrast, Cakir and Raei (2007) offer the counterargument that sukuk offer unique risk-reduction benefits when added to a portfolio of fixed income securities and are thus distinct from conventional bonds. This study goes to the heart of the debate over whether sukuk are financing instruments that mirror conventional bonds or whether they have a distinct character of their own. We put aside theoretical and structural differences and similarities between sukuk and conventional bonds and investigate whether stock market participants themselves distinguish between these two types of financial instruments. We use an event methodology to examine whether announcements of sukuk and conventional bonds lead to significant abnormal returns for the different types of issuers. While the issuance of sukuk is ostensibly motivated by religious principles, we ask whether extrinsic factors such as access to a new class of investors might also be involved in the issuance of these securities. Two opposing hypotheses may predict the stock market reaction to sukuk and conventional bonds issues. On the one hand, we can expect no significant difference between the announcement effects of both types of issues, following the opinion that these financial products are similar and do not differ in practice. Under this hypothesis, financial markets participants would consider them as totally comparable instruments and they make no difference between these issues. On the other hand, stock markets may react more negatively to the issuance of sukuk than to conventional bonds if investors consider that the selling of sukuk represents a negative signal about the quality of the borrower. Two reasons motivate this hypothesis. First, adverse selection may favor the issuance of profit-and-loss investment certificates (sukuk) over conventional interest-based bonds by borrowers with the lowest return expectations. Second, such borrowers find it easier to sell sukuk because of the excess demand for these instruments from Islamic banks and other Islamic financial institutions. To analyze the stock market reaction to sukuk and conventional bond issuance, we consider a sample of Malaysian listed companies that issued conventional bonds and sukuk during the period 2002–2009. For our purposes, Malaysia is ideal as it is by far the most active market in terms of corporate sukuk issues. The volume of sukuk issued in Malaysia alone in 2007 was $28.1 billion, compared to $19 billion for all GCC countries ( Ernst and Young, 2009). Furthermore, Malaysia dominates the global corporate sukuk market with 75% share of total corporate sukuk over the period January 2004−June 2007. Malaysian sukuk are also valuable for the purposes of this study as they represent about half of the total stock of Malaysian corporate bonds ( Jobst et al., 2008), i.e. they are not limited to a small portion of the disintermediated financing for companies. 3 We find that investors react differently to the issuance of sukuk and conventional bonds. Conventional bond issues lead to no significant stock market reaction, whereas sukuk issues associate with a significant negative stock market reaction. Our study is topical in light of the recent expansion of sukuk, broadening a fairly thin body of research on these novel securities. Existing work on the emergence of sukuk appears in the context of overviews of Islamic finance (e.g. Iqbal and Mirakhor, 2007 and Visser, 2009), and only few studies investigate their evolution or specific characteristics (e.g. Jobst, 2007 and Jobst et al., 2008). The remainder of the paper is structured as follows. In Section 2, we provide an overview of sukuk and a literature survey. We present the data and methodology in Section 3. In Section 4, we display our results, and we discuss the findings in section 5. Section 6 concludes.

Using the event study methodology on a sample of Malaysian public companies, this paper analyzes the stock market reaction to announcements of sukuk and conventional bond issues. We find that investors react differently to issuances of both securities. While there is no significant market reaction to conventional bond issues, we observe a significant negative stock market reaction to sukuk issues. We attribute this finding to the expectations of market participants from two perspectives. On the one hand, investors may take the view that even if companies issuing sukuk may have been shut out of the conventional bond market due to weaker financial and operating position, they can still take advantage of excess demand for sukuk from Islamic banks. On the other hand, investors expect that an adverse selection mechanism may encourage less-healthy companies to prefer sukuk in the form of profit-and-loss sharing schemes over conventional bond financing. Companies with low profit expectations have incentives to finance their project through such sukuk arrangements whereas firms with high profit expectations will opt for conventional bonds with a fixed repayment schedule that maximizes the upside potential. Our findings are relevant for two major debates in Islamic finance. First, Islamic finance is subject to criticism because its empirical application exhibits great similarity with conventional finance. Ayub (2007) observes that a major criticism of Islamic finance rests on the lack of differences with incumbent modes of finance. We provide countervailing evidence that stock markets can readily distinguish between sukuk and conventional bonds. Thus, market-based information supports the existence of differences between instruments emerging from Islamic finance and those associated with conventional finance. Regarding the economic effects of the expansion of Islamic finance, our results show that sukuk announcements likely lead to a negative market reaction that can adversely affect firm value. In contrast, issuance of conventional bonds has a neutral impact on market capitalization. Therefore, the increasing use of sukuk as currently structured and sold may be detrimental to firm value, at least in the short run. As negative stock market reactions may limit incentives for companies to issue sukuk, their expansion might be curbed, despite their religious underpinnings. Our results are related to the adverse selection mechanism that emerges from the coexistence of sukuk and conventional bonds on the Malaysian market. Such a mechanism would not exist if only sukuk are issued on an exchange, implying that the negative reaction to sukuk issues is likely to be reduced in a pure Islamic financial system. However, before considering large-scale adoption of Islamic finance, additional research is needed to assess the long-run implications of sukuk financing on economic development.