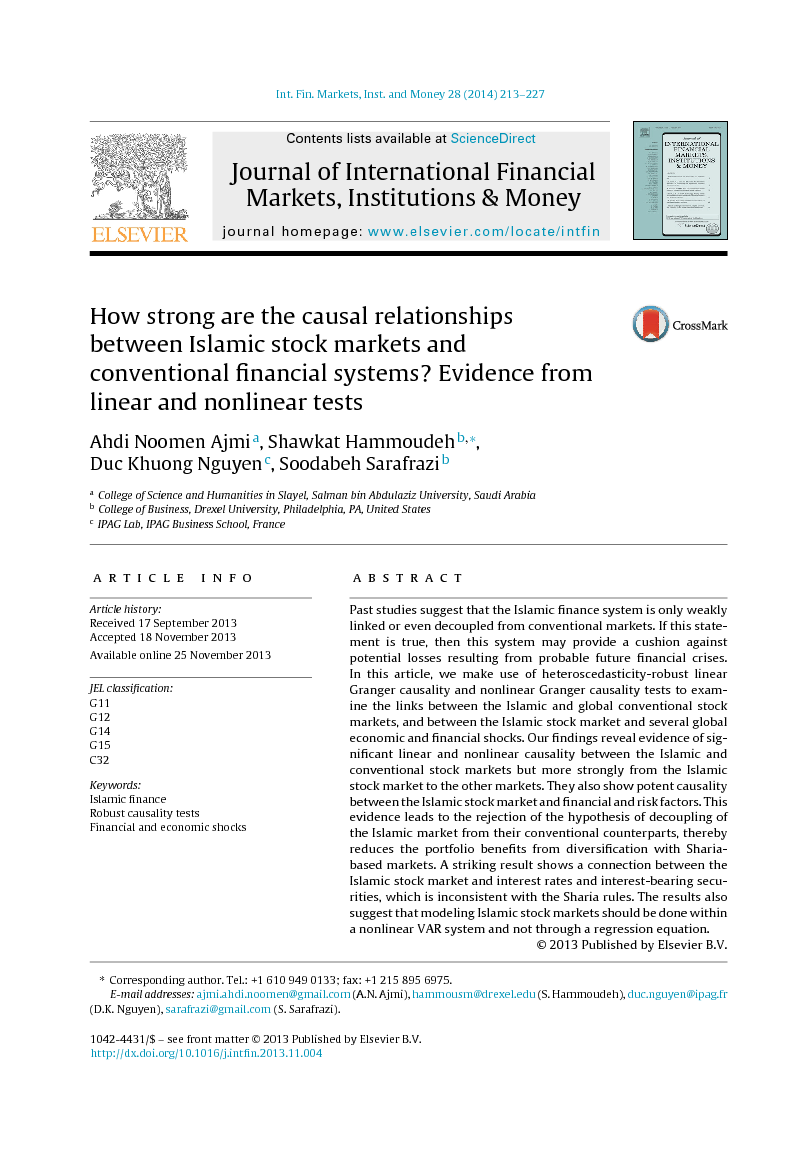 One of the new innovations in the world's financial system is the creation of Islamic banks, and stock and bond markets which operate differently from their conventional counterparts. Assets in the Islamic industry have grown 500% in the last five years, reaching $1.3 trillion in 2011. However, this phenomenal growth is still hindered by some structural factors. There is a lack of a secondary market, which prevents this sector from operating in important regions of the world. The market also requires much more short-dated products in order to enable Islamic banks to effectively manage their liquidity. Islamic banks are asset-based and asset-driven because they are prohibited from dealing with interest. Islamic equity investments have Sharia-based screens that restrict investment in certain industries and favor growth and small cap stocks. By contrast, conventional banks are interest-based and debt-driven, and conventional stock markets prefer value and mid cap stocks, and do not have investment screens. It will thus be valuable to find out whether the Islamic stock market under consideration is integrated with conventional stock markets. It is also useful to figure out if this market is linked to several diverse global shocks which are pertinent to different asset classes and systems. These issues are of great interest to conventional and Islamic investors. Indeed, investors and managers of a Sharia-compliant Islamic equity fund often pick stocks from the Sharia compliant indices or focus on investing ethically in businesses which comply with the Sharia principles. Given the recent financial crisis and the presence of nonlinearity among financial markets, we empirically employ both linear and nonlinear causality tests to investigate the interactions between the Islamic stock market and conventional finance systems. The Dow Jones Islamic Market Index (DJIM), which is a Sharia-based equity index, is used to represent the Islamic stock markets.1 This index includes shares of companies whether located in Muslim or non-Muslim countries as long as they are Sharia-compliant (i.e., they have to pass a set of rules-based screens). Although it is a subset of the Dow Jones Global Index, the DJIM index provides approximately 95% market coverage of 44 countries. It also has an independent Sharia Supervisory Board and its screens have been adopted by the Auditing & Accounting Organization of Islamic Financial Institutions (“AAOIFI”)-Standard 21.2 The use of nonlinear causality tests is entirely justified by the fact that economic and financial time series tend to interact each other in a nonlinear fashion. This recognition has been enforced by the repeated occurrences of severe economic and financial crises and events including rare black swans like the 2007/2008 global financial crisis.3 The potential nonlinearity in the dynamics of the variables of interest can manifest itself in the presence of, among others, regime switching, asymmetry, leverage effects, structural breaks, and heterogeneity of investors including speculators, particularly hedge funds, and long term investors. The mere existence of these stylized facts ultimately requires heteroscedasticity-robust (HR) procedures and nonlinear tests to examine their relationships. For example, if the error terms from a vector autoregressive (VAR) model are heteroscedastic, the conclusions of causality tests might not be robust under the assumption of constant variance ( Hafner and Herwartz, 2009). Therefore, we make use of several tests to examine causal relationships between the Islamic and conventional stock markets, and between the Islamic stock market and financial and economic factors. The tests include the heteroscedasticity consistent covariance matrix estimator (HCCME) proposed by MacKinnon and White (1985), the fixed design wild bootstrap procedure of Hafner and Herwartz (2009), and the nonparametric nonlinear Granger causality test of Hiemstra and Jones (1994). Overall, the motivation for this research is twofold. First, the magnitude of asset price variations at speculative markets typically exhibits high degree of market interrelations, implying that the errors of the causality in mean regressions may exhibit multivariate conditional heteroscedasticity. Second, the traditional Granger causality test is unable to explore the nonlinear relationship between the variables of interest. This is due to the time-varying conditional mean and variance of asset returns (Baek and Brock, 1992 and Hiemstra and Jones, 1994). We use a comprehensive dataset that includes not only the stock market indices but also the international crude oil markets, the federal fund rate, the implied volatility in stock and bond markets, the economic policy uncertainty index, and the EMU 10-year government bond index. We find evidence of significant interactions between the variables and show that the Islamic stock market is not decoupled from external shocks of different types, regions, and sources. This evidence has strong bearing on the relevance of Sharia principles to investments in Islamic and conventional markets. Moreover, the Islamic stock market is also exposed to global shocks affecting the world financial system as well as to contagion risks during times of economic and financial crises. The rest of this article is organized as follows. Section 2 provides a short review of the related literature. Section 3 introduces the empirical methods. Section 4 reports and discusses the empirical results. Section 5 concludes the article.

It is common that economic and financial systems are characterized by time series that are not linearly related. This article investigates the linear and nonlinear links between Islamic and global conventional equity markets, and between the Islamic market and several global (economic and financial) shocks. For this purpose, we make use of both linear heteroscedasticity-robust (HR) and nonlinear causality testing procedures to examine those relationships. Specifically, we perform causality tests using the heteroscedasticity-consistent covariance matrix estimator proposed by MacKinnon and White (1985), the fixed design wild bootstrap of Hafner and Herwartz (2009), and the nonparametric nonlinear Granger causality test of Hiemstra and Jones (1994). Altogether, these tests allow one to account for some of the most important characteristics of financial and economic time series in testing for their causality. Our results based on nonlinear causality analysis display rich interactions between variables and show that the Islamic equity market is not isolated from external shocks of different types, regions, and sources. In particular, the results show that there is a causal link coming from the Islamic market to both the European and the Asian stock markets and Brent oil market. This result is somewhat surprising because it excludes an Islamic causal link to the United States market which is the major market among the 44 world markets included in the DJIM index. This proves that the selection of stocks based on the strict Sharia principles may make some difference in the causal relationships and links for the DJIM index. The causal link with Europe and Asia shows that there is stronger Islamic relationship with regions in which Islamic Finance is more developed. The reversal link is not as strong. This shows the restrictive domain of Islamic investments because of the Sharia restrictions. Moreover, conventional markets use several kinds of hedging strategies against risks which may have helped them somewhat to shield themselves from cross market spillovers from the unhedged Islamic market. Consequently, the Islamic market may outperform the conventional counterparts during bull markets but underperform in bear markets because of lack of hedging. Our findings thus suggest the rejection of the decoupling hypothesis of Islamic equity finance from conventional equity finance, still implying that the Islamic finance system may not provide either a good cushion against financial shocks affecting the conventional markets or large diversification benefits for portfolio managers. Overall, the Islamic finance system is also exposed to global shocks common to the world financial system as well as to contagion risks in the case of economic and financial crises. Therefore, the Islamic stock market may not be a strong therapy that heals from global financial crises. Accurate modeling of the Islamic market dynamics should account for some interactions with, among others, changes in conventional equity markets, the U.S. bond market implied volatility, the economic policy uncertainty, oil price movements, and the US policy interest rate despite the financial ratio restrictions on investing on interest-based securities. For instance, a nonlinear VAR model incorporating the global economic and financial factors as endogenous variables will straightforwardly provide better estimates than a univariate model.