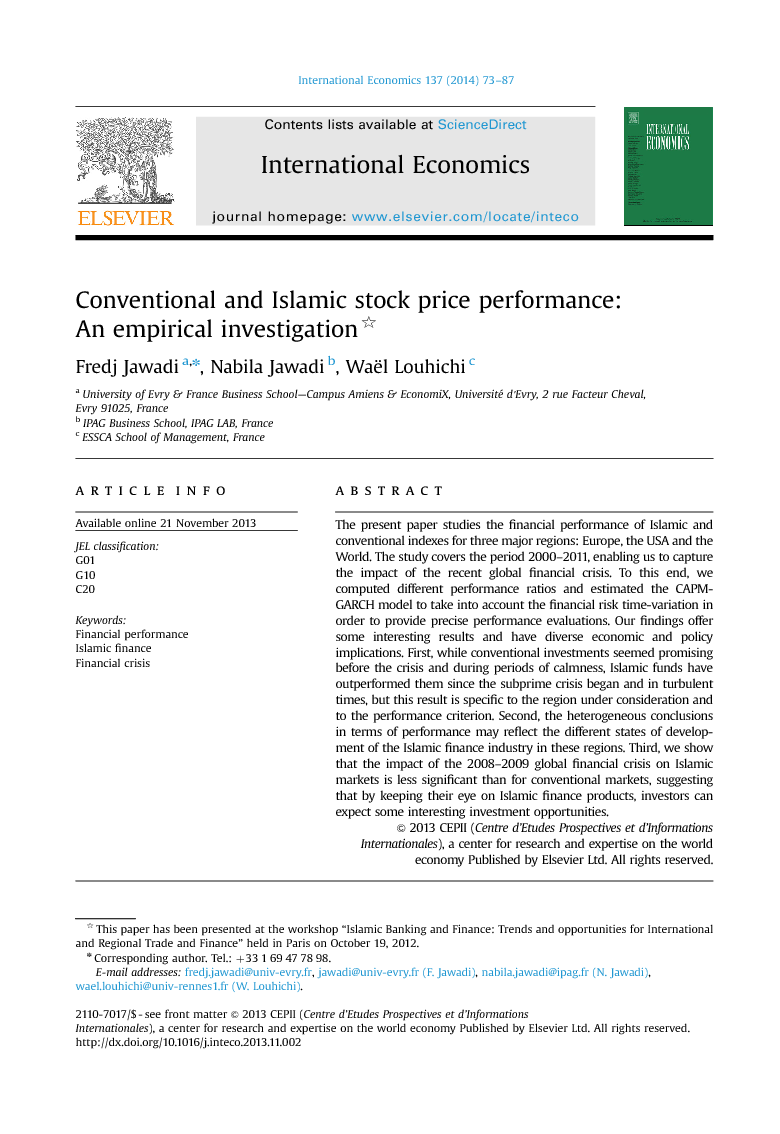 The present paper studies the financial performance of Islamic and conventional indexes for three major regions: Europe, the USA and the World. The study covers the period 2000–2011, enabling us to capture the impact of the recent global financial crisis. To this end, we computed different performance ratios and estimated the CAPM-GARCH model to take into account the financial risk time-variation in order to provide precise performance evaluations. Our findings offer some interesting results and have diverse economic and policy implications. First, while conventional investments seemed promising before the crisis and during periods of calmness, Islamic funds have outperformed them since the subprime crisis began and in turbulent times, but this result is specific to the region under consideration and to the performance criterion. Second, the heterogeneous conclusions in terms of performance may reflect the different states of development of the Islamic finance industry in these regions. Third, we show that the impact of the 2008–2009 global financial crisis on Islamic markets is less significant than for conventional markets, suggesting that by keeping their eye on Islamic finance products, investors can expect some interesting investment opportunities.

The global financial crisis 2008–2009 has been the subject of a large number of theoretical and empirical studies that focus on two particular aspects: the sources and the consequences of the financial downturn (Shiller, 2008, Aglietta, 2009 and Foster and Magdoff, 2009, among others). These studies overwhelmingly suggest that the subprime crisis, the Federal Reserve monetary policy in 2000,1 the bankruptcy of Lehman Brothers, and a range of innovative financial products were at the root of the crisis. Many authors have also noted the main outcomes linked to the liquidity crunch, namely, financial market losses, public debt crises and a general economic recession in most developed and emerging countries, pulling down investment, employment, income, spending, consumption, etc. Thus, a key question for academics, professionals and policy makers is how to end this Great Financial Crisis and how to limit similar financial downturns in the future. In spite of various seminal essays and propositions (Soros, 2008, Shiller, 2008 and Fitoussi and Stiglitz, 2009), as yet there is no unanimous solution. It seems however that the renovation of finance, the restructuration and regulation of financial markets, and the modernization and reorganization of the financial systems are among the urgent reforms needed in order to reassure investors, while better controlling speculation, trading and financial risk, and providing stable returns (Aglietta, 2009 and Aglietta and Rigot, 2009). In this context, alternative finance strategies, including Islamic finance, are central features of the present debate (Jouini, 2009). The framework of Islamic finance is based on the principles of Shariah or Islamic law, which offers a specific business climate marked by ethically-oriented trade, social and responsible investment, sustainable finance and banking, and a highly regulated finance system. The latter prohibits interest rates when lending money to householders, or investment in businesses that deal with the production of alcohol, pork-related products and ammunition. It also prohibits speculation and excess risk, and recommends that business banks should share their profit and losses with investors. Furthermore, Islamic finance rules impose asset-backed security and equity participation, and the limiting of investments to assets that comply with Islamic Law. This means the development of low-risk and modest-return instruments such as Murabaha or short-term secured commodity and trade finance and structured medium-term investments. 2 The ethical and moral rules together with the high degree of caution of Islamic investments make Islamic finance a promising alternative for improved performance, especially in turbulent times with high conventional financial risk. We should recall that the Islamic investment market originally developed in the Gulf Council and some Muslim countries before it began to spread to other regions. Overall, we can note considerable growth in Islamic equity funds over recent years and a large increase in the volume of capital managed by Islamic finance institutions that can be explained by the strong participation of private Muslim investors. During the 1990s, it expanded at about 12% a year, offering exceptional growth and encouraging several western investment banks to offer added-value niche services, compatible with Shariah ( Causse, 2009). Furthermore, several Islamic financial products rapidly reached the US, European, Middle Eastern and Asian-Pacific markets. In addition, since the latest crisis, several banks and financial institutions in developed and emerging countries have begun reviewing their legislation and regulations to adopt these products. However, the risk associated with Islamic communitarianism delayed the development of Islamic finance in some countries and regions. At this level, we are not questioning this issue or looking to see whether Islamic finance can be a good substitute for conventional finance or not. Instead, the study aims to operationally investigate the issue of the performance of Islamic finance compared with conventional finance during periods of calmness and crises. The issue is especially interesting as it constitutes the key to investment. It can also have important implications for bankers, investors, managers and policy-makers wishing to develop optimal portfolios and to adapt their investment strategies to market phases. To this end, the paper investigates the issue over the last decade, a period which witnessed the subprime crisis and the global financial crisis. Our study focuses on three major regions: Euro area, the USA and the World over the period 2000–2011, enabling us to make international comparisons in a context of crisis. Furthermore, while previous studies tend to be limited to one or two performance measures, our analysis makes use of different performance ratios. In particular, we evaluate and appreciate financial performance according to different types of risk: total; systematic and specific. As for the crisis date used to identify times of calmness and turbulence, we have retained the subprime crisis (second semester of 2007) as a benchmark date for the crisis, associating the period before July 2007 with the period of calmness, and the crisis period after this date. Of course, it is also possible to conduct break tests to endogenously detect the crisis period but we preferred to separate the periods according to the subprime crisis, providing commonly accepted dates for the three regions under consideration to make the comparison simpler. Our findings point to various significant results. On the one hand, while conventional funds outperform Islamic investments in periods of calmness, they fail to supplant them during periods of crisis. On the other hand, the level of performance appreciation varies depending on the region under consideration, possibly reflecting the degree of Islamic finance development in the country in question, but also depending on the screening conditions and the Islamic index used. However, it is important to note that the degree of development of Islamic Finance also varies inside the region. For example, in Europe, Islamic Finance is far more developed in the United Kingdom than in France. The paper is organized as follows. Section 2 will briefly summarize the literature review. The econometric methodology is presented in Section 3. Section 4 will discuss the main empirical results. Our concluding remarks are summed up in the last section.

This paper investigates the financial performance of Islamic and conventional indexes in three major regions (the USA, Euro area and the whole World) during periods of calmness and turbulent times. To this end, we applied different performance ratios that vary according to type of risk (total, systematic and specific) and other restrictions (normal distribution, time-varying risk). Our analysis produced some interesting results. First, Islamic investments appear to outperform conventional finance, particularly during turbulent times, while standard funds seem to be preferred in calm periods. Second, the performance appreciation varies according to the performance measure, which indicates that great care is needed in applying and analyzing performance ratios, notably in relation to risk type. Third, we noted heterogeneous results for the three regions under consideration, which could be due to the state of development of Islamic funds in the regions, the degree of screening of Islamic funds and the Islamic Index selected, and the definition of the crisis date that can vary according to regions. Finally, it seems that Islamic finance has not escaped the recent global financial downturn but that the latter's impact on Islamic returns is less significant than its impact on conventional returns. This is particularly interesting as it may indicate further investment opportunities and diversification benefits for this new class of financial assets. Overall, these findings offer diverse economic and policy implications as investors may well be better off controlling the risk associated with their portfolio through investment in Islamic funds. The financial market authorities could revise their regulations and legislation to enable banks and markets to include these types of products and/or to propose new products with similar characteristics. A further extension of this study could focus on improving performance measures and extending the performance analysis to microeconomic Islamic fund data.