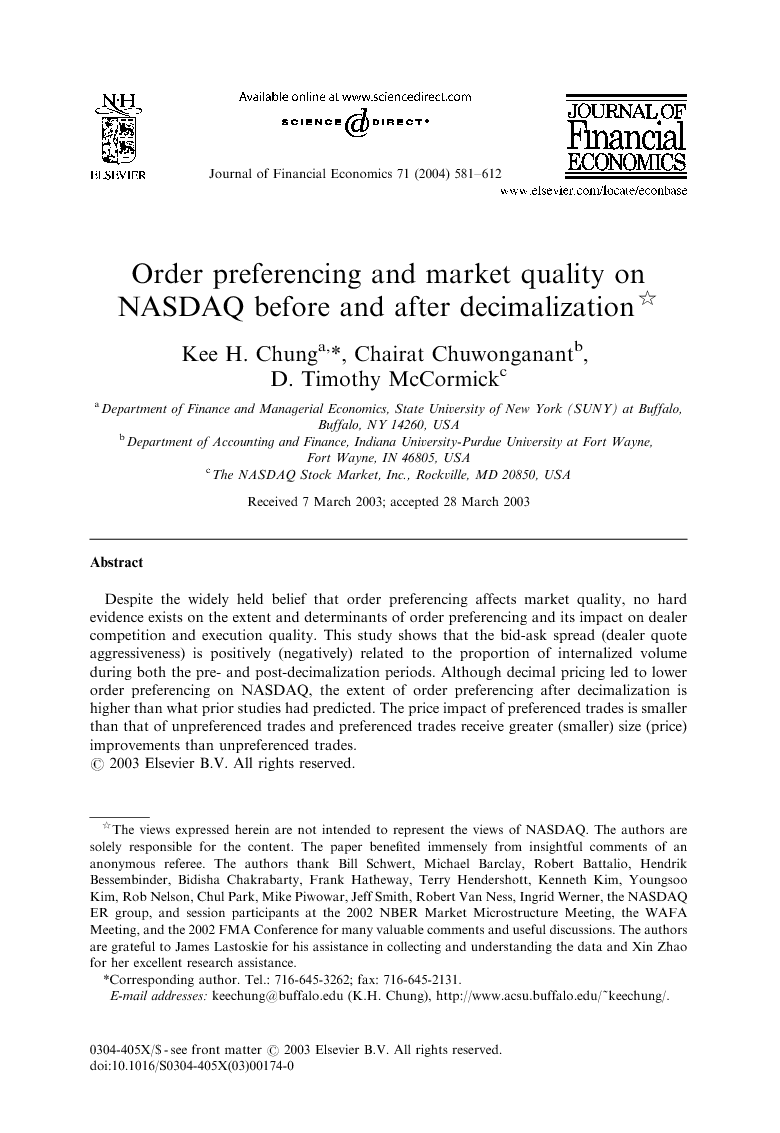 Despite the widely held notion that order preferencing has detrimental effects on market quality and may have led to wider bid-ask spreads on NASDAQ, there has been no prior direct evidence on the cross-sectional relation between NASDAQ execution costs and the extent of order preferencing. In the present study, we provide new evidence on these issues using a large sample of NASDAQ stocks before and after decimalization.Our empirical results suggest that order preferencing is prevalent on NASDAQ during both the pre- and post-decimalization periods. Although decimal pricing results in lower preferencing, the post-decimal proportion of preferenced volume is still much higher than what some people had predicted. Dealer quote aggressiveness (the spread) is significantly and negatively (positively) related to the extent of internalization during both the pre- and post-decimalization periods. Consistent with the prediction of the clientele-pricing hypothesis advanced in several recent studies, we find that the price impact of preferenced trades is smaller than that of unpreferenced trades. Market makers help affiliated brokers and brokers with preferencing agreements by offering greater size improvements. Although the present study provides some new evidence regarding the effects of order preferencing on dealer quote competition and execution costs, the net effect of order preferencing on investor welfare is not obvious because order preferencing is likely to have broad and diverse ramifications for investor welfare. For example, order preferencing can reduce broker search costs, allowing the savings to be passed along to customers in the form of reduced commissions. In addition, there are dimensions of market quality other than price competition, such as speed of execution and reliability. Preferencing can also improve these areas of market quality. The accurate quantification of these benefits is likely difficult and is well beyond the scope of the present study. Further investigations into these issues would be a fruitful area for future research.