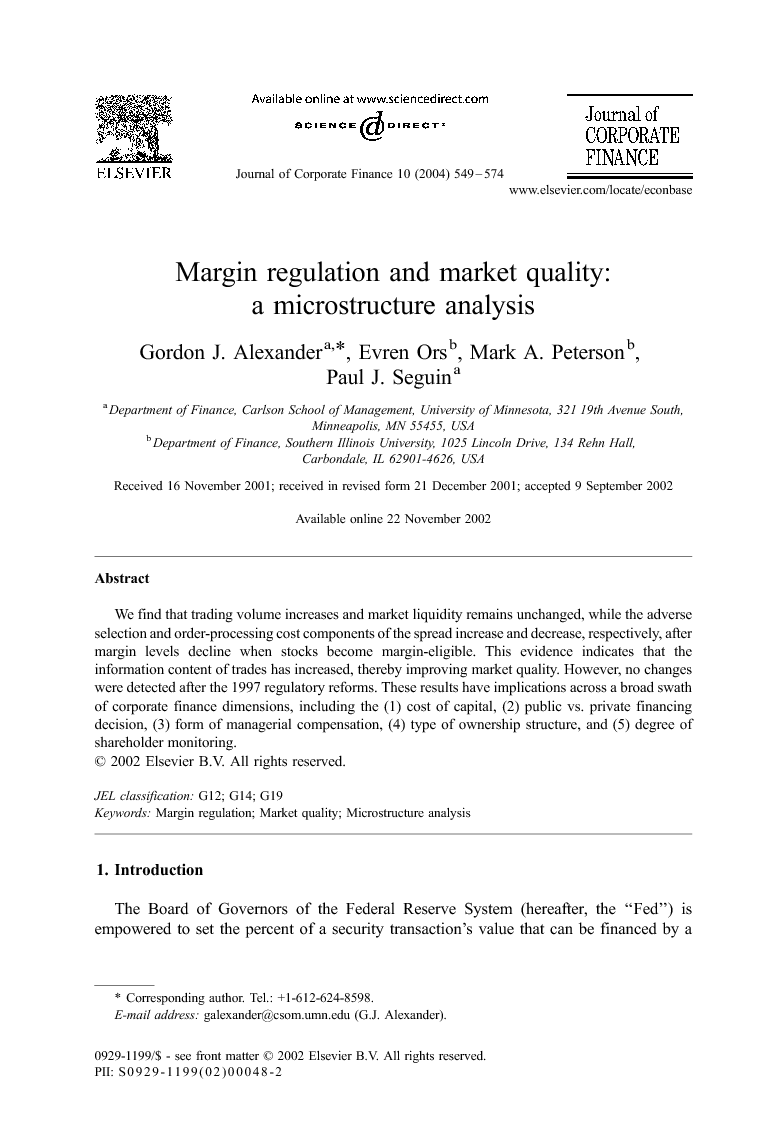 We find that trading volume increases and market liquidity remains unchanged, while the adverse selection and order-processing cost components of the spread increase and decrease, respectively, after margin levels decline when stocks become margin-eligible. This evidence indicates that the information content of trades has increased, thereby improving market quality. However, no changes were detected after the 1997 regulatory reforms. These results have implications across a broad swath of corporate finance dimensions, including the (1) cost of capital, (2) public vs. private financing decision, (3) form of managerial compensation, (4) type of ownership structure, and (5) degree of shareholder monitoring.

In this study, we investigate the impact of margin-eligibility on the market quality of the affected equities. First, we find that the market liquidity of stocks is unchanged when they become margin-eligible, as there are insignificant changes in spreads, depths, and the number of market-makers. Second, we find that the portion of the spread that is attributable to adverse selection increases after margin-eligibility, suggesting there are more informed investors, while the portion attributable to order-processing costs decreases. While this increase should typically lead to a widening of spreads, the observed increase in trading volume appears sufficient to offset the increase in adverse selection so that, on balance, spreads are unaffected. In sum, once firms become margin-eligible, the quality of the market for their shares improves. These findings suggest that margin-eligibility has no impact on a firm’s cost of capital, as liquidity is unaffected. However, the observed increase in the information content of market prices has potential repercussions across a broad swath of other corporate finance dimensions. Examples include the public vs. private financing decision, the form of managerial compensation, the type of ownership structure, and the degree of shareholder monitoring. However, the recent introduction of two regulatory reforms—the introduction of teenies and the implementation of Order Handling Rules—appear to have eliminated the impact of margin-eligibility on all variables under consideration. Hence, on balance, a reduction in margin is a non-event for corporations in the current regulatory environment