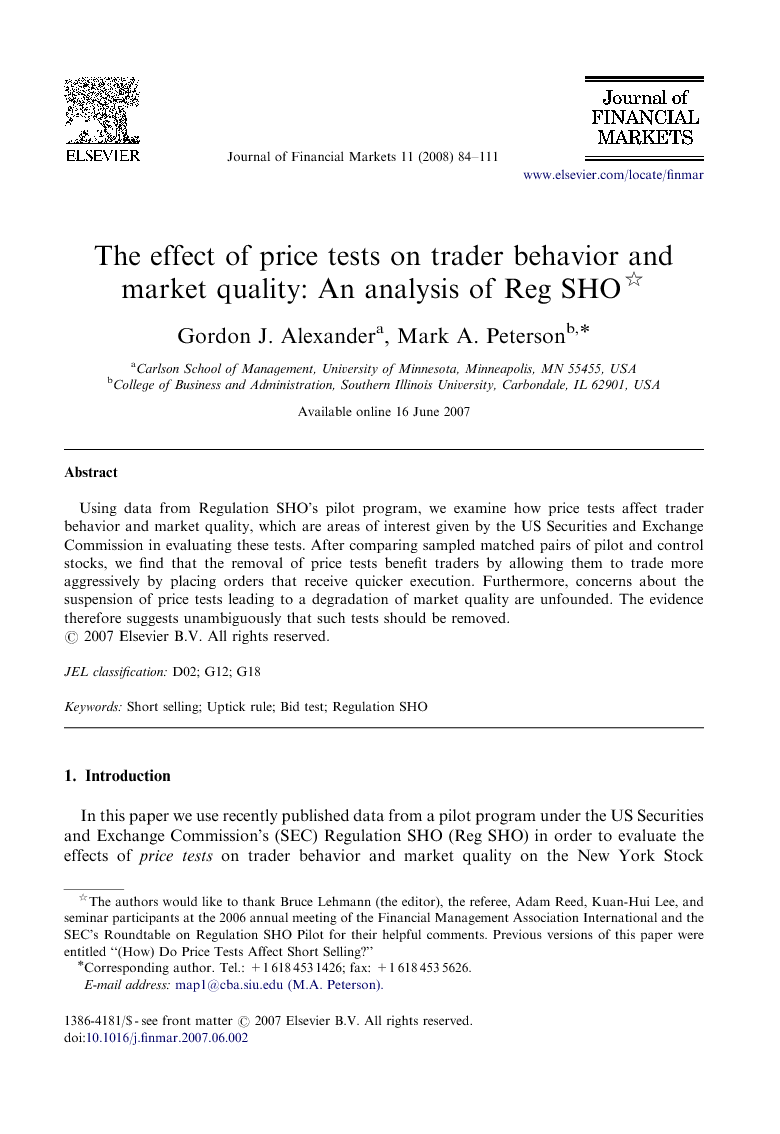 Using data from Regulation SHO's pilot program, we examine how price tests affect trader behavior and market quality, which are areas of interest given by the US Securities and Exchange Commission in evaluating these tests. After comparing sampled matched pairs of pilot and control stocks, we find that the removal of price tests benefit traders by allowing them to trade more aggressively by placing orders that receive quicker execution. Furthermore, concerns about the suspension of price tests leading to a degradation of market quality are unfounded. The evidence therefore suggests unambiguously that such tests should be removed.

HO that temporarily suspends price tests for some stocks to examine how the tests affect (1) trader behavior and (2) market quality, which are areas of interest given by the SEC in deciding whether to permanently remove or amend these tests. After comparing a sample of matched pairs of pilot and control stocks, we conclude that the removal of price tests has had no deleterious effect on trader behavior and has not led to a decrease in market quality. More specifically, we find that suspension of the uptick rule on the NYSE leads traders to place more executable short orders that are of smaller size. The resulting trades are typically executed at lower prices relative to the quotes, and have slightly greater price impact. All of these results are consistent with an increase after the removal of price tests in ‘‘order splitting’’ by informed large short sellers of pilot stocks who seek to disguise their intentions as suggested by Boehmer, Jones, and Zhang (2007). We also find significant declines in the ask depth occurring after price tests are removed on the NYSE and, consequently, an increase in the bid/ask depth ratio. Furthermore, the significant decrease in execution price after the removal of the uptick rule on pilot stocks can be attributed to an increased ability to trade more aggressively since short market or marketable limit orders can be executed immediately if they do not exceed the quoted bid depth. In contrast, stocks that trade with the uptick rule in place are traded less aggressively since they tend to execute above the bid more frequently and are often equivalent to de facto quote-improving or at-the-quote limit orders. Thus, the removal of price tests will give traders increased freedom to choose how quickly they want their orders to be executed. Evidence that short selling without price tests does not, on balance, hurt liquidity is provided by noting that short trades on the NYSE execute at prices that are, on average, above the quote midpoint even after the suspension of price tests, albeit by a smaller amount. Thus, price tests should be viewed as a hindrance to execution that, by removing immediacy, distorts liquidity. Similar results are observed for Nasdaq pilot stocks except that the differences in the number of short trades, short trade size, and bid/ask ratios are no longer significant. Furthermore, the effect on ask depths, execution prices, and price impacts are notably smaller. Thus, Nasdaq’s bid test seems to be relatively inconsequential, a result that is hardly surprising since some exchanges do not enforce the bid test when trading Nasdaq-listed stocks. As for other measures of market quality, we find no evidence of a significant change in either market volatility or market efficiency after the suspension of price tests on either the NYSE or Nasdaq. These findings are somewhat surprising, given the significant increase in the price impact of short trades that execute below the midpoint after the tests are suspended. However, this could be due to the fact that the increased impact is too subtle since (1) roughly 27% (40%) of the NYSE (Nasdaq) trades analyzed involve a short sale with less than half of them executing below the midpoint and (2) the average price impact of such short sales is only 4.72 (0.77) basis points higher on the NYSE (Nasdaq) when the tests are removed.35 Importantly, the economic implications of these findings are that removal of price tests are not expected to lead to changes in the equity premium, nor such things as option pricing or the cost of capital. Concern was expressed at the SEC’s Roundtable on Reg SHO that price tests might be most beneficial for small cap stocks during times of market stress. However, replication of all our tests using only the days of greatest market stress (defined as the days when returns on the Russell 2000 dropped at least 1% in value) with just the small cap pilot and control stock pairs does not alter any of the conclusions reached with the full sample on all days. In sum, the removal of price tests has had no deleterious effect on trader behavior and has not led to a decrease in market quality as measured by liquidity, price efficiency, or market volatility. The evidence therefore suggests unambiguously that such tests should be removed.