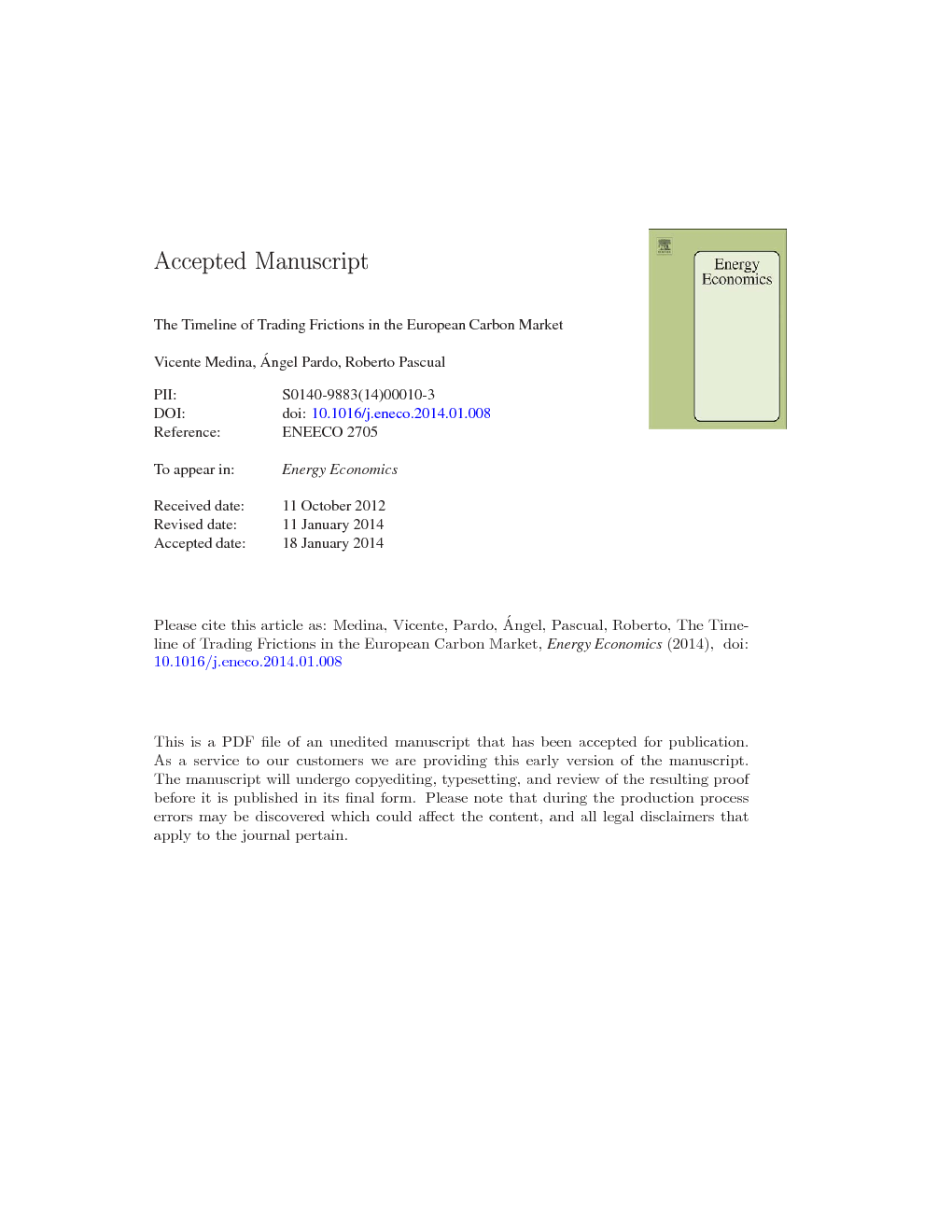 During its trial phase (Phase I), the EU Greenhouse Gas Emission Trading Scheme (EU-ETS) collapsed because of an over-allocation of emission allowances. We evaluate the progress of this market from the trial phase to the next commitment period (Phase II) from a microstructure angle. We show that trading frictions, as measured by the relative spread, information-asymmetry risk, and market making profits decreased from Phase I to Phase II. Although volatility decreased, its noise-related component gained in importance at the expense of its information-related component, resulting in lower quality of the price changes.

We provide a comparative analysis of Phase I (trial phase) and Phase II (Kyoto’s Protocol compliance phase) of the world’s largest market for greenhouse gas emission allowances, the EU-ETS. We complement prior studies that focused on important issues such as efficiency of prices, price leadership, learning speed, or changes in price fundamentals by adopting a market microstructure perspective. Our main goal is to test if Phase II is an improved version of Phase I, as it is generally assumed in the literature, by looking at issues of high relevance for potential traders and regulators such as trading costs, information-asymmetry risk, market-making profits, volatility sources, and quality of prices. We pay particular attention to the market-wide breakdown that took place by the end of Phase I and its long-run implications in trading costs and market quality during Phase II. This market collapse was shortly followed by the outbreak of the world financial crisis. Using trade data from ECX, the most important trading platform within the EU Scheme, we provide evidence that at the end of 2010, the EU-ETS had not fully recovered from these two major events. Our findings contrast with the usual view of Phase II as an improved version of Phase I. Trading frictions, as measured by both the bid-ask spread and the relative spread, drastically diminished from Phase I to Phase II. The quoted spread decreased from 9 ticks at the beginning of Phase I to 1 tick by the end of 2010. Similarly, the relative spread fell from 0.67% to 0.07% during the same interval. Therefore, liquidity improved after the market collapse. We also report a significant decrease in the information asymmetry risk. During the pre-2007 Phase I, the informational friction component of the spread was 0.0825 EUR in median terms, representing about 95% of the spread and 46.9% of the average trade price. During Phase II, it fell to 0.0137 EUR, 76.36% of the spread and 9.05% of the average trade price. Our findings indicate that, historically, the main determinant of the size of the spread in the EU-ETS has been, to a large extent, the perceived risk of trading against informed traders, whilst other market making costs, such as inventory holding costs or order processing costs, played a secondary role. We use the realized spread to proxy for the expected market making revenues per lot round-trip. We find that the realized spread decreased from Phase I (0.250% EUR before 2007) to Phase II (0.154% EUR), and gradually during Phase II. Our results suggest that market makers actually translated their lower market making costs during Phase II to their quoted bid-ask spreads. We decompose the return volatility into its theoretical components: (i) the frictionunrelated volatility, due to public news, (ii) the informational-friction volatility, due to informed trades, and (iii) the real-friction volatility, due to noise. We find that friction-unrelated news was the most important contributor to the EU-ETS volatility. Yet, we provide evidence of an increase in the contribution of real-friction volatility from Phase I to Phase II. Market quality summary measures reveal that this increase in transitory volatility generated a persistent negative effect on the quality of the EUETS. All models considered coincide in showing that market quality progressively recovered during Phase II after the 1st quarter of 2009. However, quality levels observed by the end of 2010 were still below those found during the pre-collapse Phase I. Therefore, we conclude that the 2007 market breakdown had a long-lasting effect on the quality of the European carbon market, probably fueled by the international financial crisis.