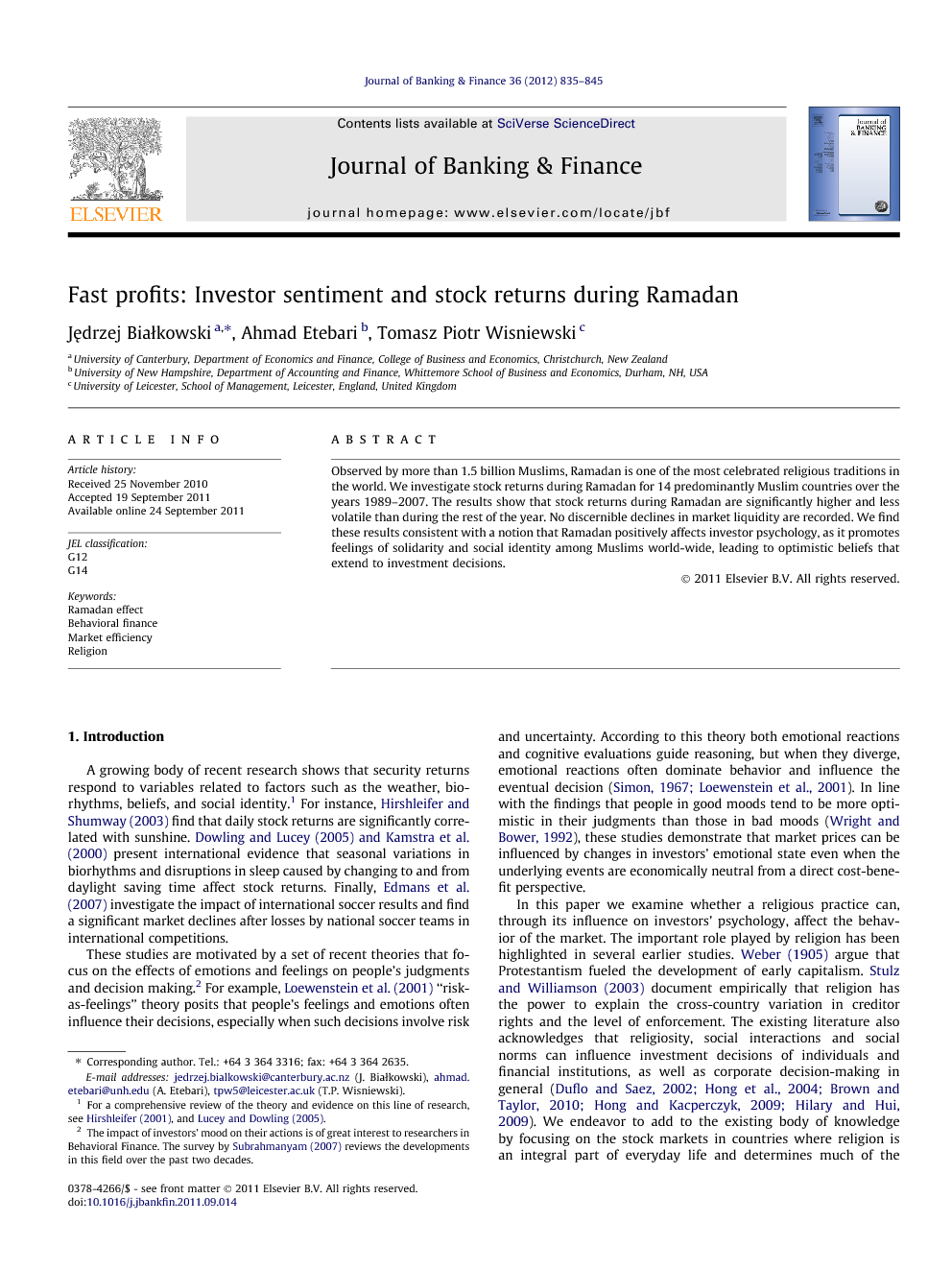 Observed by more than 1.5 billion Muslims, Ramadan is one of the most celebrated religious traditions in the world. We investigate stock returns during Ramadan for 14 predominantly Muslim countries over the years 1989–2007. The results show that stock returns during Ramadan are significantly higher and less volatile than during the rest of the year. No discernible declines in market liquidity are recorded. We find these results consistent with a notion that Ramadan positively affects investor psychology, as it promotes feelings of solidarity and social identity among Muslims world-wide, leading to optimistic beliefs that extend to investment decisions.

A growing body of recent research shows that security returns respond to variables related to factors such as the weather, biorhythms, beliefs, and social identity.1 For instance, Hirshleifer and Shumway (2003) find that daily stock returns are significantly correlated with sunshine. Dowling and Lucey, 2005 and Kamstra et al., 2000 present international evidence that seasonal variations in biorhythms and disruptions in sleep caused by changing to and from daylight saving time affect stock returns. Finally, Edmans et al. (2007) investigate the impact of international soccer results and find a significant market declines after losses by national soccer teams in international competitions. These studies are motivated by a set of recent theories that focus on the effects of emotions and feelings on people’s judgments and decision making.2 For example, Loewenstein et al. (2001) “risk-as-feelings” theory posits that people’s feelings and emotions often influence their decisions, especially when such decisions involve risk and uncertainty. According to this theory both emotional reactions and cognitive evaluations guide reasoning, but when they diverge, emotional reactions often dominate behavior and influence the eventual decision (Simon, 1967 and Loewenstein et al., 2001). In line with the findings that people in good moods tend to be more optimistic in their judgments than those in bad moods (Wright and Bower, 1992), these studies demonstrate that market prices can be influenced by changes in investors’ emotional state even when the underlying events are economically neutral from a direct cost-benefit perspective. In this paper we examine whether a religious practice can, through its influence on investors’ psychology, affect the behavior of the market. The important role played by religion has been highlighted in several earlier studies. Weber (1905) argue that Protestantism fueled the development of early capitalism. Stulz and Williamson (2003) document empirically that religion has the power to explain the cross-country variation in creditor rights and the level of enforcement. The existing literature also acknowledges that religiosity, social interactions and social norms can influence investment decisions of individuals and financial institutions, as well as corporate decision-making in general (Duflo and Saez, 2002, Hong et al., 2004, Brown and Taylor, 2010, Hong and Kacperczyk, 2009 and Hilary and Hui, 2009). We endeavor to add to the existing body of knowledge by focusing on the stock markets in countries where religion is an integral part of everyday life and determines much of the interaction within the society. Specifically, we examine the stock market effects of Ramadan for nations where the majority of the population are adherents of Islam. Observed by more than 1.5 billion Muslims, Ramadan is one of the most celebrated religious traditions in the world. It involves abstinence from eating, drinking and other sensual pleasures, as well as strict control of desires. In principle, Ramadan is a time of reflection, self-reformation, giving and worship (Qur’an 51:21; 2:183). As a fundamental, shared experience, it brings about a greater solidarity and cooperation among Muslims throughout the world. A major contributor to this effect is the greater social support provided within the community and also the closer relationship an individual Muslim establishes with Allah, which in itself is a critical form of social relation. During the holy month Muslims become more socially and spiritually oriented. As indicated by research in positive psychology, religion provides a valuable form of social support, encourages optimistic beliefs, and contributes to the believers’ happiness (Beit-Hallahmi and Argyle, 1997). The collective enthusiasm derived from Ramadan leads to a heightened sense of social identity and greater satisfaction with life for Muslims around the world. This satisfaction, in turn, may conceivably lead to optimistic beliefs that extend to the investment decisions of the followers. The process of Ramadan-type fasting itself can substantially benefit the health of the devotee. As mentioned in the Qur’an and also supported by clinical research, it can promote both the physical and mental well-being of individuals (Böck et al., 1978, Perk et al., 2001 and Saleh et al., 2005). Clinical research shows that the Ramadan fasting generally makes people less tense and anxious (Daradkeh, 1992) and that it may also induce mild states of euphoria (Knerr and Pearl, 2008). The euphoria derived from Ramadan could influence investor behavior and consequently have a positive valuation effect on equity markets in Islamic countries. Mood aside, the demand for equities may also increase as a result of the favorable health status enjoyed by the local Muslim investors. Rosen and Wu (2004) report that households in good health are inclined to hold a greater share of risky assets in their portfolios. Similarly, Edwards (2008) finds that retired people perceive significant risks associated with future health shocks and that these perceptions lead to a continued reduction in financial risk taking. In light of the foregoing discussion, we would expect the Ramadan period to coincide with notable increases in the prices of risky securities. This study is a comprehensive examination of stock returns for a broad sample of 129 Ramadan months for 14 predominantly Muslim countries over the period running from 1989 to 2007. The results show that during Ramadan stock returns are on average much higher but less volatile compared to the rest of the year. The results also attest to the fact that there are no discernible declines in market liquidity during Ramadan. We find these results consistent with our prior expectation that Ramadan has a positive impact on the mood and hence on investors’ sentiment. Interestingly, stock markets located in countries populated by non-Muslim majority do not experience similar price effects during the holy month. We also show that the results are unrelated to well-documented calendar anomalies such as the “January effect” or the “Turn-of-the-Week effect”. This is perhaps not surprising, as Ramadan does not coincide systematically with a fixed day or season in the Gregorian calendar. The remainder of this paper is organized as follows: Section 2 presents a discussion of the literature on the health benefits resulting from fasting and the evidence of the market effects of religious festivities. Section 3 outlines the data set and the data collection procedures. Section 4 discusses the results, while Section 5 examines the robustness of these results. The last section concludes the paper.

Motivated by the evidence from positive psychology showing that religion affects believers’ mood, happiness and risk-taking attitude, we investigate the market effect of Ramadan, one of the most celebrated religious traditions in the world. Using daily equity return data for 14 predominantly Muslim countries over the years 1989–2007, we find evidence of a strong Ramadan effect. Specifically, over the holy month the mean annualized return is significantly higher than the mean return over the rest of the Islamic year (38.09% vs. 4.32%). For the Ramadan effect to materialize the majority of population needs to be of Muslim faith. Data from different providers were examined and ten different testing approaches were used,14 each time re-confirming the robustness of the anomaly. Despite these large returns, we find a significant decrease in volatility in all but one of the sample countries. These results imply a sharp shift in the investors’ optimism. We check whether the effect is due to market liquidity, length of the daily fasting period, currency fluctuations and some well-known fixed calendar anomalies, notably the Monday, January and Halloween effects. None of these factors explain the results. Hence, we find the results anomalous and inconsistent with the notion of market efficiency. We believe that the Ramadan effect documented in this paper can best be explained by a change in investor psychology. Ramadan is a religious month that affects almost every aspect of Muslims’ lives. Besides fasting and prayers, Ramadan promotes heightened social awareness and a closer relationship with Allah and with other fellow Muslims around the world. As a fundamental shared experience, Ramadan brings about a sense of solidarity among Muslims, enhances their satisfaction with life and encourages optimistic beliefs. This optimism affects investor sentiment and decisions leading to the price run-ups we report in this paper. Our baseline results have been derived from the analysis of stock indices of 14 countries. Collectively, they reflect the decisions of many investors in the Muslim world. It would be interesting to further explore the Ramadan effect at the individual company or business sector level. Some companies may operate more in line with the core tenets of Islam and may be more socially responsible than others. Such companies might benefit more from the behavioral biases of pious investors during Ramadan. Further evidence would help us better understand what drives the Ramadan effect and what the determinants imply for asset valuation. This understanding is important given the potential opportunities these mostly frontier markets provide to the investing public. The implication of our findings for investors is obvious. Investors seeking fast profits in the Muslim world should try to profit from the fast, buying shares prior to the start of Ramadan and selling them at the end of the holy month or preferably immediately after Eid al-Fitr. Of course, there are transactions costs that one would need to take into account, but any such costs would appear to pale in comparison to the observed returns. Alternatively, investors could embark on a more passive strategy by delaying their sales until the end of the holy month or by accelerating the timing of purchases ahead of it. We feel however duty-bound to mention two caveats. First, the fact that an anomaly was present in the data for decades gives no guarantees that it will also persist in the future. Second, the stock markets tend to be excessively volatile (Shiller, 1981) and seasonal effects, as a general rule, are incapable of explaining large proportion of this volatility.