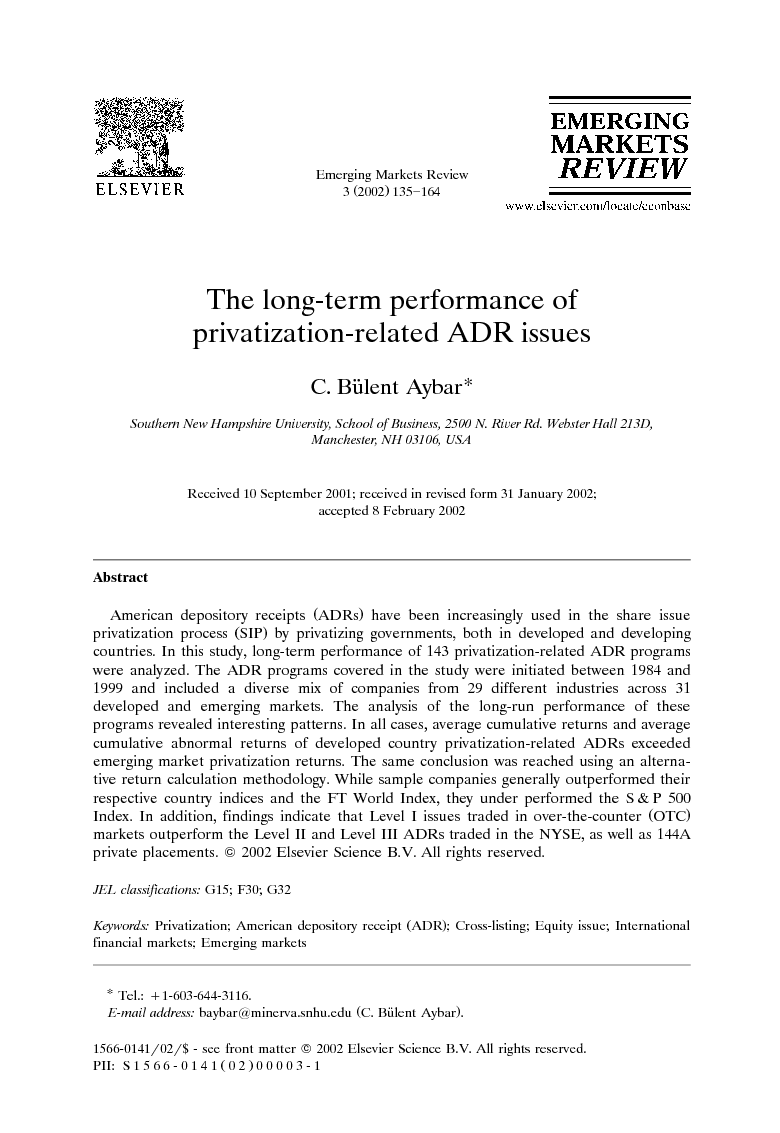 American depository receipts (ADRs) have been increasingly used in the share issue privatization process (SIP) by privatizing governments, both in developed and developing countries. In this study, long-term performance of 143 privatization-related ADR programs were analyzed. The ADR programs covered in the study were initiated between 1984 and 1999 and included a diverse mix of companies from 29 different industries across 31 developed and emerging markets. The analysis of the long-run performance of these programs revealed interesting patterns. In all cases, average cumulative returns and average cumulative abnormal returns of developed country privatization-related ADRs exceeded emerging market privatization returns. The same conclusion was reached using an alternative return calculation methodology. While sample companies generally outperformed their respective country indices and the FT World Index, they under performed the S&P 500 Index. In addition, findings indicate that Level I issues traded in over-the-counter (OTC) markets outperform the Level II and Level III ADRs traded in the NYSE, as well as 144A private placements.

Privatizations through share issues accounted for approximately 70% of the privatization revenues generated by governments in the last two decades. These issues collectively represent a significant portion of the global equity supply. In 2000, share issue privatizations accounted for $90bn of the $200bn global initial public offerings (IPOs) (Hill, 2002). Although share issue privatizations (SIPs) proved to be an effective method in divestment of large state-owned enterprises (SOEs), their use was constrained by the size and sophistication of the local equity markets. Domestic absorption of multi-billion-dollar issues stumbled upon serious obstacles, even in relatively developed equity markets.1 The limitations imposed by the size of individual transactions and the equity market infrastructures forced government issuers to search for cross-border venues for the sale of SOE shares.2 The globalization of financial markets enabled governments to sell equity in foreign markets through cross-listings and private placements, and international offerings reached approximately 47% of total share-issue privatizations (Bortolotti et al., 2000 and Megginson et al., 2000). Among competing financial centers, the government issuers were particularly attracted to US equity markets due to its sophisticated market infrastructure and the availability of a diverse institutional and individual investor pool. The center of gravity further shifted toward US equity markets when the introduction of a new regulatory framework by the US Securities and Exchange Commission (SEC) energized the American Depository Receipt (ADR) market in 1985. The ADRs denote shares that represent equity issued in a foreign country. These negotiable certificates, which represent a non-US company's publicly traded equity, are quoted, traded and pay dividends in accordance with US clearing and settlement standards. As the new regulatory regime relaxed stringent disclosure requirements and offered flexibility, a range of ADR tools emerged. The variations of generic ADRs facilitated access to US equity markets for a large number of non-US companies, including the state-owned enterprises. These ADR tools proved to be particularly attractive and effective for privatization agencies in search of cross-border placement opportunities. Consequently, ADRs were increasingly used in privatization-related equity issues. The increasing internationalization of privatization-related share issues, and particularly the use of ADRs by both developed and emerging market governments, produces at least two readily observable outcomes. First, privatization-related ADR issues create new investment opportunities for institutional and individual investors around the globe. Secondly, they facilitate internationalization of the cost of capital for the newly privatized firms. An immediately relevant inquiry motivated by these outcomes is the long-term performance of the privatization-related ADR issues. An examination of the observed price performance of privatization-related ADRs provides evidence about how the market expectations toward these privatization issues change.3 This has important implications for investors, since the existence of abnormal returns may lead to the formulation of trading strategies. The mirror image of the investors’ expected returns is the issuer's cost of external equity. Therefore, long-term returns also offer clues about the evolution of the cost of equity of the privatized firms over time. The performance of the UK and continental European share-issue privatizations was addressed in a series of studies in the early and mid-1990s. More recently, research focusing on cross-country samples reported long-term abnormal returns.4 However, studies investigating the performance of international share-issue privatizations are rare. In a recent study, Foerster and Karolyi (2000) analyzed the long-term performance of 333 global equity offerings from 35 countries. The Foerster–Karolyi sample included 68 privatization-related ADR issues. They reported statistically significant long-term underperformance for all global equity offerings, including the privatization-related ADRs. These results contradict the positive abnormal returns reported in earlier privatization share-issue performance studies. The current study was partially motivated by the conflicting performance results reported in the recent literature, and examines the long-term performance of 143 privatization-related ADR issues from 31 countries. While the study is primarily focused on the long-term return performance, two sets of relationships were also addressed: (1) the relationship between the after-market performance and the origin of the issuer; and (2) the relationship between the after-market performance and the trading platform. The issuers were classified as developed or emerging market in origin. Unraveling the country of origin–performance relationship is particularly appealing to portfolio managers from the perspective of portfolio diversification. Likewise, the relationship between the type of ADR and the trading platform where ADRs are listed and traded and the after market performance is of interest to privatization advisors and policy makers in privatizing countries.