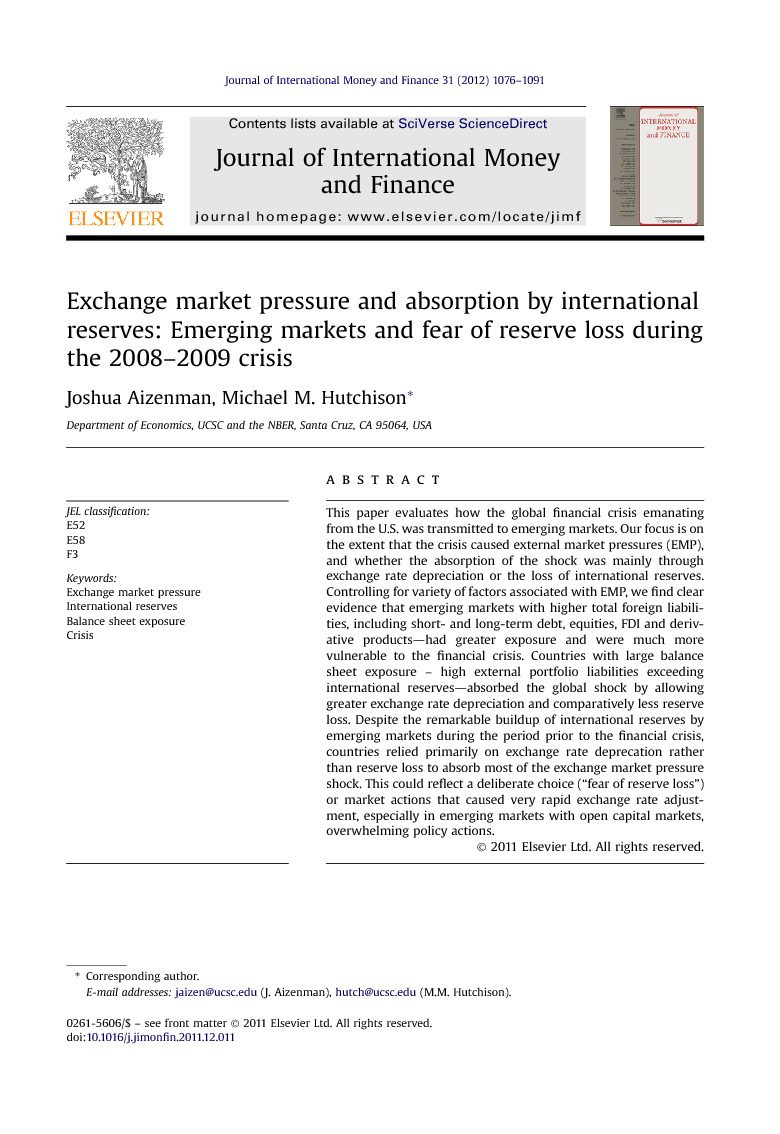 This paper evaluates how the global financial crisis emanating from the U.S. was transmitted to emerging markets. Our focus is on the extent that the crisis caused external market pressures (EMP), and whether the absorption of the shock was mainly through exchange rate depreciation or the loss of international reserves. Controlling for variety of factors associated with EMP, we find clear evidence that emerging markets with higher total foreign liabilities, including short- and long-term debt, equities, FDI and derivative products—had greater exposure and were much more vulnerable to the financial crisis. Countries with large balance sheet exposure – high external portfolio liabilities exceeding international reserves—absorbed the global shock by allowing greater exchange rate depreciation and comparatively less reserve loss. Despite the remarkable buildup of international reserves by emerging markets during the period prior to the financial crisis, countries relied primarily on exchange rate deprecation rather than reserve loss to absorb most of the exchange market pressure shock. This could reflect a deliberate choice (“fear of reserve loss”) or market actions that caused very rapid exchange rate adjustment, especially in emerging markets with open capital markets, overwhelming policy actions.

International financial markets were at the heart of the world-wide financial crisis that emerged in late 2007 and reached a climax between August 2008 and February 2009. Although the crisis started with the mortgage-related (sub-prime) crisis in the United States, and was closely linked to banks in Western Europe holding mortgage-backed securities and derivative products, it quickly led to global liquidity crisis that caused financial market turmoil through the rest of the world. We focus in this paper on the extent to which the global financial shock adversely affected the external position of emerging market economies. We measure external position by looking at changes in exchange market pressure—a combination of exchange market depreciation and loss of international reserves—as well as considering these two components separately. We are interested in two basic questions: Firstly, how was the transmission of the global shock affected by the extent of their international balance sheet exposure, financial development and financial openness?1 Secondly, given the degree of exchange market pressure, what determines the tradeoff or choice between exchange rate depreciation and loss of international reserves in absorbing the shock? We sidestep in this paper questions regarding the root causes of the crisis. These issues are covered by a growing literature dealing with the pre-crisis trends and policies that led to the buildup of financial vulnerabilities, and ultimately to the crisis in the U.S. and it rapid transition to the global economy [see Obstfeld, 2010 and Obstfeld and Rogoff, 2010, and the references therein]. Our main focus is on how the global financial crisis affected emerging market economies (EMs), where we define emerging market economies according to the Morgan Stanley Capital International (MSCI) Emerging Markets index (see Table 1, notes for the list of EMs). The focus on emerging markets stems from several observations. First, these countries were the source of most of the pre-crisis economic growth, and most of the global population lives there. Second, the process of globalization rapidly increased the financial and trade linkages of emerging markets with the OECD countries, relative to the more limited integration of developing, non-emerging market countries. Finally, the OECD countries have had elastic access to large dollar swap lines extended by the U.S. Federal Reserve (either directly or via Federal Reserve’s large swap line with the ECB). Thereby, the OECD countries were able to meet excess demand for dollar liquidity by borrowing dollar reserves from the Federal Reserve, facilitating the adjustment and deleveraging pressures. In contrast, most emerging markets were not able to rely on borrowed reserves via swap lines, and were thereby more exposed to the need to adjust abruptly to the global crisis.