عنوان انگلیسی
On the measurement of the international propagation of shocks: is the transmission stable?
دانلود فوری مقاله + سفارش ترجمه 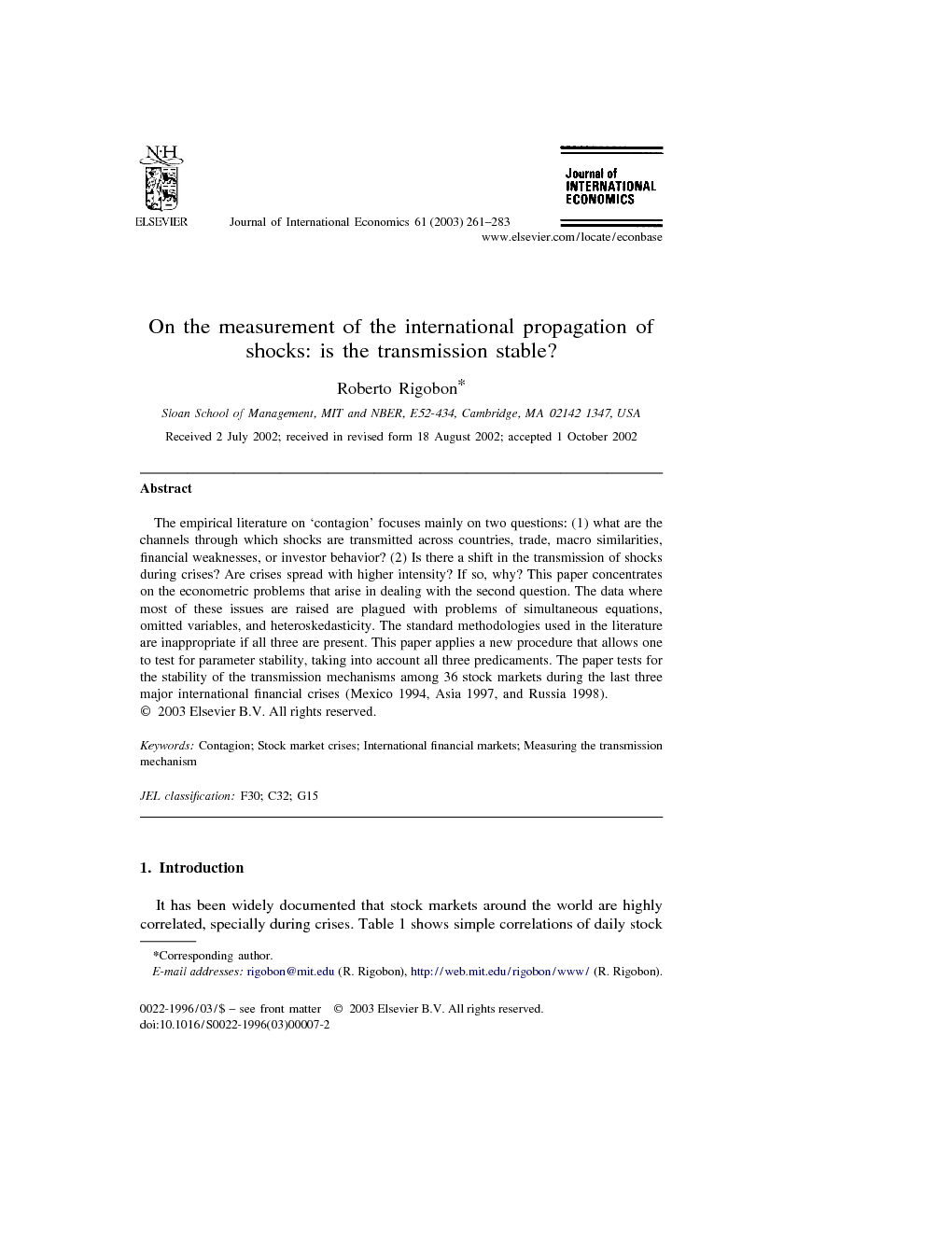 The empirical literature on ‘contagion’ focuses mainly on two questions: (1) what are the channels through which shocks are transmitted across countries, trade, macro similarities, financial weaknesses, or investor behavior? (2) Is there a shift in the transmission of shocks during crises? Are crises spread with higher intensity? If so, why? This paper concentrates on the econometric problems that arise in dealing with the second question. The data where most of these issues are raised are plagued with problems of simultaneous equations, omitted variables, and heteroskedasticity. The standard methodologies used in the literature are inappropriate if all three are present. This paper applies a new procedure that allows one to test for parameter stability, taking into account all three predicaments. The paper tests for the stability of the transmission mechanisms among 36 stock markets during the last three major international financial crises (Mexico 1994, Asia 1997, and Russia 1998).

It has been widely documented that stock markets around the world are highly correlated, specially during crises. Table 1 shows simple correlations of daily stock market returns from 1994 to 2001 for several Latin American, South East Asian, and developed countries. As can be seen, if Colombia and Chile are excluded from the Latin American sample, the average correlation is 56.6% between Latin American countries—it is 60.8% on average, with a median of 66.5% for the South East Asian countries—and, it is 41.8%, with a median of 60.7% for the developed economies. By any standard, these correlations show a very strong co-movement. Furthermore, the correlation coefficients are even higher during crises. The Mexican, Asian, and Russian crashes were followed by a sequence of stock market and exchange rate crises in other markets. These collapses, and the processes that generated them, have driven the literature to ask exactly how these shocks were transmitted internationally and why with such intensity. Was it because, as some believe, the linkages between countries grew stronger during these crises, or as others have proposed, was it because they were already strong before the crises took place? This debate starts with the seminal contribution by King and Wadhwani (1990), where they define contagion as a significant change in the correlation coefficient. Still today, this is the most frequently asked questions in the contagion literature.1 However, no satisfactory procedure has been developed to been able to answer it. The main econometric problem arises because the data on world stock markets suffers from problems of heteroskedasticity, simultaneous equations and omitted variables; as a result, traditional econometric techniques for testing for structural changes are inappropriate. Heteroskedasticity changes the biases introduced by the simultaneous equations and omitted variable problems. Therefore, the null hypothesis of parameter stability might be rejected due to of a change in the bias rather than to a shift in the underlying coefficients. Ronn (1998) showed that tests of parameter stability based on correlation coefficients are biased when the data suffers from heteroskedasticity. Boyer et al. (1999), Loretan and English (2000), and Forbes and Rigobon (2002) extend Ronn’s contribution to the case of contagion and concluded that most of the findings in the earlier literature are reversed when the heteroskedasticity is taken into consideration. However, the adjustment in the correlation coefficient requires very strong assumptions. As is indicated in Forbes and Rigobon’s appendix, the adjustments in the correlations are biased if the data suffers from simultaneous equations or omitted variable problems—both of which are likely to be present.2 Furthermore, this problem cannot be solved by using micro or firm level data because the aggregate issues will continue to be present and the OLS estimates from the microdata will be as inconsistent as those from aggregate regressions. The objective of this paper is to extend the literature by presenting evidence on the stability of the international propagation of shocks using a new test that is robust to all three predicaments present in the data.3 The procedure is rooted in the assumption that if the heteroskedasticity in a sub-sample can be explained by a shift in the variance of only a sub-set of the shocks, then it is possible to test for the stability of the coefficients. The recent international crises, therefore, provide a natural framework which to conduct the test. The country (or countries) generating the increase in the variance is (are) usually known (for example, Mexico in 1994). And it is reasonable to assume that most of the rise in variance in other markets (for example, Argentina) shortly after the original shock is due to the Mexican crisis and not to idiosyncratic Argentinean news. One advantage of the test is that if the assumption about heteroskedasticity is violated, then the null hypothesis is rejected. Thus, the lack of rejection is informative regarding both parameter stability and the form of the heteroskedasticity. Using daily data from a total of 36 stock market indices, I find that the transmission mechanism did not differ significantly between low-volatility and high-volatility periods surrounding the Mexican and the Russian crises. I did, however, find evidence of some change in the transmission mechanism after Thailand’s devaluation. The paper is organized as follows: Section 2 describes the procedure. Section 3 applies the test to daily data of 36 stock markets from 1993 to 1998. Section 4 concludes and discusses extensions.

Stock markets throughout the world, and especially those in emerging markets, seem to be excessively correlated. The contagion literature tries to explain such a high degree of co-movement. In its search, two main questions have been raised: is the transmission of shocks intensified during crises, and what is explanation behind the propagation mechanism? This paper has concentrated on the first question. The properties of the data make the standard techniques to test for parameter stability inappropriate. Chow tests, principal component tests of stability, as well as the new ‘breed’ of correlation adjustment tests of contagion, are biased and inconsistent. The objective of the paper is to fill this gap and reassess the conclusions drawn based on other methodologies. The paper uses a new procedure to test for changes in coefficients that is able to deal with simultaneous equations, omitted variables, and heteroskedasticity problems. Tests using this procedure find that the transmission mechanism during the recent financial crises is relatively stable during the Mexican crisis. The sample studied has 36 countries; seven from Latin America, eight from South East Asia, 18 among the developed nations, and three from the rest of the world. The parameter stability hypothesis was not rejected for that crisis. However, during the Russian collapse (in particular, the LTCM crisis) it was possible to reject the hypothesis that the transmission of shocks across countries was the same. Even stronger rejections were found during the Asian crises. In fact, it can be claimed that for Latin America, India, South Africa, and Russia the propagation of shocks shifted significantly during Thailand’s devaluation. These results are robust to changes in the specification. This paper has looked at the behavior of prices around the crises. Research on portfolio flows indicates that capital flows tend to have excess co-movement across countries in the same region as well (see Froot et al., 1998; and Stulz, 1999). It is possible that while prices do not behave significantly different during crisis (as found here) capital flows do. Indeed, most of the new theories on contagion go in this direction.17 This issue suggests a rich field for further theoretical and empirical work in which tests, such as that used here, could be useful.