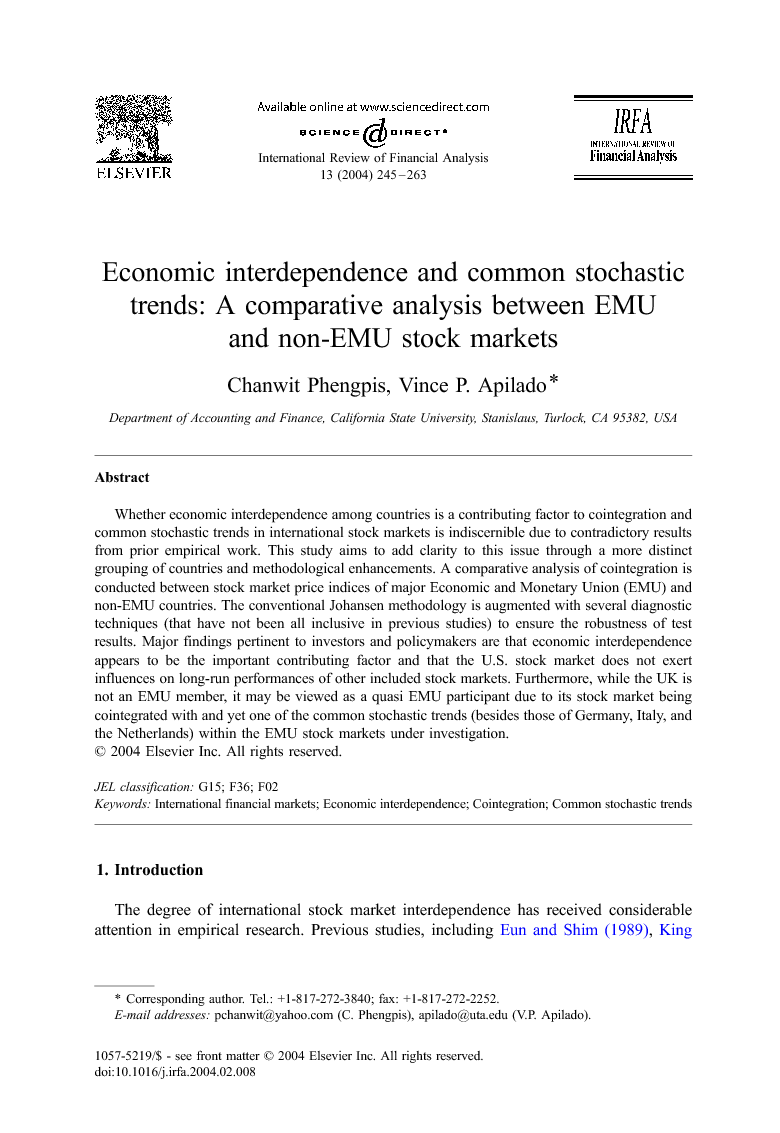 Whether economic interdependence among countries is a contributing factor to cointegration and common stochastic trends in international stock markets is indiscernible due to contradictory results from prior empirical work. This study aims to add clarity to this issue through a more distinct grouping of countries and methodological enhancements. A comparative analysis of cointegration is conducted between stock market price indices of major Economic and Monetary Union (EMU) and non-EMU countries. The conventional Johansen methodology is augmented with several diagnostic techniques (that have not been all inclusive in previous studies) to ensure the robustness of test results. Major findings pertinent to investors and policymakers are that economic interdependence appears to be the important contributing factor and that the U.S. stock market does not exert influences on long-run performances of other included stock markets. Furthermore, while the UK is not an EMU member, it may be viewed as a quasi EMU participant due to its stock market being cointegrated with and yet one of the common stochastic trends (besides those of Germany, Italy, and the Netherlands) within the EMU stock markets under investigation.

This study reexamines whether economic interdependence is an important contributing factor explaining cointegration and common stochastic trends in international stock markets. A comparative analysis is conducted between stock market price indices for five EMU and five non-EMU countries, exemplifying the groups of countries whose economies are and are not strongly interdependent, respectively. The conventional Johansen tests are implemented and augmented with diagnostic techniques to assure the robustness of the test results. Stock market price indices of the included non-EMU countries are not cointegrated over the full sample period, nor over time, nor after taking into account the 1987 U.S. stock market crash or the 1997 Asian financial crisis. The absence of cointegration implies that each national stock market is driven by its own unique stochastic trends or fundamentals, which in turn implies that the global significance of the U.S. economy and the established roles as financial centers of the U.S. and UK stock markets—included as control variables—do not make these two markets influence the long-run paths and performances of others. Stronger economic interrelations among the countries may be needed to warrant cointegration and common stochastic trends in their stock markets. Stock market price indices of the five EMU countries studied are cointegrated over the full sample period, over time, and even after controlling for the 1987 U.S. stock market crash or the 1997 Asian financial crisis. The strength of cointegrating relations over the passage of time reflects the extent of economic interdependence among EMU countries. The increased significance of the first CIV after the mid-1990s parallels the cooperative efforts among the prospective EMU countries to integrate their economies prior to the official EMU inception in 1998. The emergence of the second CIV in year 2000 potentially mirrors further reinforcement of economic interconnection via the common currency (euro) and monetary policy shared among EMU participants. The findings that the U.S. stock index can, while any of the EMU indices cannot, be excluded from cointegration relations also support these interpretations. Consistent with a priori observations, the comparative results from the EMU and non-EMU groups suggest that economic interdependence among the subject countries appears to be an important contributing factor to cointegration and common stochastic trends in their stock markets. International investors may improve diversification gains over long-time horizons by allocating their portfolios into stock markets of the countries that do not have substantial economic ties. The lack of cointegration between the U.S. and stock markets in both groups makes it an attractive avenue to achieve such gains. Additionally, despite a decrease in long-run diversification benefits from cross-border investments into EMU stock markets, international investors may benefit from an identification of the sources of common stochastic trends. They should evaluate their long-run investment portfolios conditioning upon the prospects of stock markets of Germany, Italy, Netherlands, and the UK that are weakly exogenous, and hence underlying the long-run conduits of (and hence the returns on) stock markets in the EMU area. Common stochastic trends in the EMU stock markets imply that their stock index prices trend upward together over time because they share some mutual economic growth factors governing earnings and dividends. These factors should gradually narrow the disparity between relatively strong and weak economies (i.e., countries) within the EMU area and facilitate the effectiveness of common policies implemented by EMU policymakers and thus the long-run stability of the union. An investigation into why stock markets of Germany, Italy, the Netherlands, and UK are weakly exogenous should prove informative. Cointegration between the UK and major EMU stock markets is possibly described by its quasi participation in the EMU, resulting from its long-established economic ties with EMU countries, whereas its weak exogeneity is potentially explained by its policy autonomy, resulting from its decision not to formally join the EMU. Furthermore, Germany and the Netherlands with relatively sound economies may play the dominant roles in defining the EMU common policies and consequently lead the mutual growth of EMU stock prices. On the other hand, Italy with a comparatively tenuous and yet important economy may have economic fundamentals that are insufficiently aligned with others. This possibility may enable its stock market to be one of the common stochastic trends, underlying long-run paths of stock market index prices and hence returns in major EMU nations.