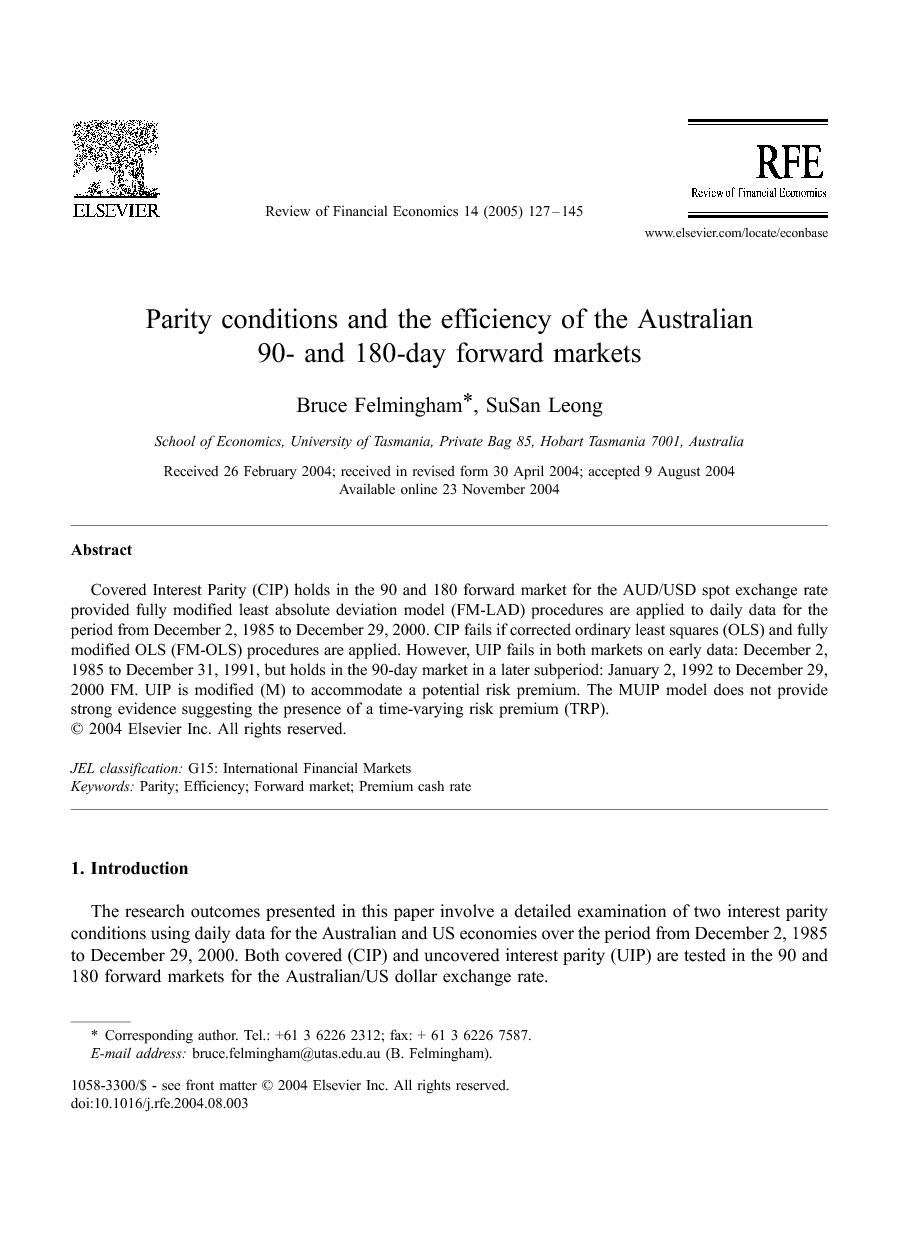 Covered Interest Parity (CIP) holds in the 90 and 180 forward market for the AUD/USD spot exchange rate provided fully modified least absolute deviation model (FM-LAD) procedures are applied to daily data for the period from December 2, 1985 to December 29, 2000. CIP fails if corrected ordinary least squares (OLS) and fully modified OLS (FM-OLS) procedures are applied. However, UIP fails in both markets on early data: December 2, 1985 to December 31, 1991, but holds in the 90-day market in a later subperiod: January 2, 1992 to December 29, 2000 FM. UIP is modified (M) to accommodate a potential risk premium. The MUIP model does not provide strong evidence suggesting the presence of a time-varying risk premium (TRP).

The research outcomes presented in this paper involve a detailed examination of two interest parity conditions using daily data for the Australian and US economies over the period from December 2, 1985 to December 29, 2000. Both covered (CIP) and uncovered interest parity (UIP) are tested in the 90 and 180 forward markets for the Australian/US dollar exchange rate. The motivation for an analysis of this kind is to be found in the significance of these two conditions for the efficiency of forward and spot markets for the Australian dollar (AUD) and consequently as a reliable guide to international investors and for the orderly conduct of Australia's monetary policy. In selecting these two equilibrium conditions, the emphasis is placed on the behaviour of the USD/AUD exchange rate in the very short run when it is only capital movements which explain exchange rate movements. The two parity conditions are the cornerstones on which forward market efficiency is founded. CIP asserts that the forward premium on foreign exchange must equal the difference between domestic and foreign interest rates on securities of the same term to maturity provided that domestic and foreign bonds are both free of default risk. A second requirement for CIP is that speculative trading should bring the forward premium (discount) into equality with expected depreciation (appreciation) of the domestic currency. Tests of these hypotheses have a practical significance in addition to their relevance for economic theory. The interest parity/market efficiency nexus provides insights about market participants risk attitudes and the extent of capital market integration. In particular, the failure of either parity or market efficiency may indicate that foreign securities are imperfect substitutes for domestic ones of equivalent maturity and that market participants require compensation in the form of a risk premium if they are to hold the domestic currency. The CIP condition in particular can be viewed as a test of whether risk-free arbitrage profit opportunities exist for potential investors. Finally, these two equilibrium conditions carry significant policy implications, in particular, they concern the capacity of the domestic monetary authorities to control interest rates and to intervene in foreign exchange markets. These capacities are extremely important in small open economies such as the Australian economy. UIP underpins a number of models of the balance of payments and the exchange rate and in terms of policy implication if the UIP condition holds sterilised foreign exchange market intervention is ineffective. The failure of UIP does mean that sterilised intervention can have real effects and that the portfolio balance model of exchange rate intervention may be preferred to the monetary models of the balance of payments. Little wonder that Taylor, (1995, p.14) views UIP as the cornerstone condition for foreign exchange market efficiency. The two interest parity conditions also have important implications for international capital mobility. Following Feldstein and Horioka (FH, 1980) changes in a country's savings rate affects its rate of investment and provides evidence of low capital mobility. If capital is perfectly mobile, a shortfall in savings in one country should be easily made up by borrowing from abroad and need not drive up the domestic rate of interest and crowd out domestic investment. The relevance of this international capital mobility issue in the present context is that CIP and UIP are two of four definitions of perfect capital mobility. These also include the FH hypothesis and the real interest parity condition. It follows that the failure of either or both CIP and UIP implies imperfect capital mobility, a matter of immediate importance for agents in this market. The initial analyses of CIP and UIP are conducted in the absence of any risk premium effects. This initial stage is attended by data problems and econometric issues and requires a battery of formal tests, including West (1988) corrected OLS, Phillip and Hansen (1990) fully modified ordinary least squares (FM-OLS) and Phillips (1995) fully modified least absolute deviation model (FM-LAD). The results of this initial phase are of interest: CIP holds for the entire sample period (December 2, 1985–December 29, 2000), and no further tests of CIP are conducted given the general applicability of CIP. In particular, CIP and FME are empirically equivalent, and no further test of market efficiency is required beyond the CIP condition. Initial tests for UIP suggest that both conditions should be rejected with one notable exception. The UIP condition holds in the 90-day market and for subsample 2 (SS2) (January 2, 1992 to December 29, 2000) only, neither condition holds in the 90- or 180-day markets otherwise. Further research is indicated, in particular, to allow for the presence of a risk premium. Allowance for the presence of a time-varying risk premium (TRP) is made in a [Generalised Auto Regressive Heteroskedastic (GARCH)-M] model of the UIP condition. Three interpretations of the GARCH-M process are applied: GARCH (1,1)-M, EGARCH and Glosten, Jagannathan and Runkle (GJR)-GARCH. Generally, there is no evidence for the presence of a time-varying risk premium in either the 90- or 180-day market. These conclusions are reached via an analysis structured in the following way. Section 2 is dedicated to a review of relevant literature, while the properties of the data set are discussed in a third section. Section 4 contains the complete analysis of the CIP condition, while initial analyses of the UIP conditions are disclosed in the fifth and sixth sections of the paper, and policy effects on exchange rate volatility are analysed in the penultimate section. Policy implications and conclusions are drawn in a final section.

This study examines two equilibrium models of the relationship between interest rates and spot and forward exchange rates in the Australian context: covered interest parity (CIP) and uncovered interest parity (UIP). It extends the models of the UIP in particular to test empirically for the presence of a time-varying risk premium. Consequently, we have considered the CIP and UIP relationships over the period 1985–2000. For ease of application, the analyses are focused on the foreign exchange relationships between two countries, Australia and the United States of America. To overcome the problem of nonstationarity data, comparatively recent estimation techniques are introduced and applied. The UIP model is modified to allow for the presence of a time-varying risk premium in the foreign exchange market. The main results of the study are summarised in the following paragraph. The CIP theorem holds in Australia's 90- and 180-day markets, implying that there is an absence of pure arbitrage opportunities. This can be taken as evidence of market efficiency. This result also suggests that the Australian and the US financial markets are highly integrated. With the equalisation of covered interest rates, the country premium between Australia and the US has been eliminated. While substantial deviations from CIP are a good indication that capital mobility is less than perfect, the fact that CIP holds, however, is consistent with either high or low capital mobility (see Willett, Keil, Ahn, & Seok, 2000). In terms of the modern theory that combines the CIP and speculative theories of the forward rate, the appropriate measure of capital mobility is the extent to which uncovered rather than covered interest parity holds. In an influential paper, Edwards and Khan (1985) make use of the UIP approach to estimate capital mobility. Looking at the UIP results in this paper, there is no evidence to support the notion that capital mobility between Australian and the US has increased substantially in the 1990s. The failure of the UIP condition in both subperiods does not suggest an increasing degree of capital mobility. The UIP is rejected over the period of December 2, 1985–December 31, 1991 but holds over the later period of January 2, 1992–December 29, 2000 in the 90-day market. This may be seen as a result of the liberalisation of the financial sectors in both countries and by the demolition of barriers to capital and trade flows. On one hand, it encourages inflows of foreign direct and portfolio investment and greatly supports economic growth. On the other hand, the UIP also reduces the independence of the country's domestic monetary and fiscal policies, causing overheating problems and resource misallocation. MUIP models are developed to test for a time-varying risk premium, but evidence for a TRP is confined to subsample 1 in the case of the 90-day market and for subsample 1 for EGARCH estimates in the 180-day market. Following Edwards and Khan (1985), the argument that the degree of capital market integration has increased in the 1990s is not generally supported by the evidence produced from this analysis, in particular, by the failure of the UIP condition in the 180-day market in both subperiods. However, the UIP condition does appear to hold in the 90-day Australian/US forward market in the 1990s (subperiod 2), suggesting that transactors in the Australian 90-day market have a better basis for predicting the future value of spot exchange rates, although there is no evidence to support the presence of a time-varying risk premium in the 1990s.