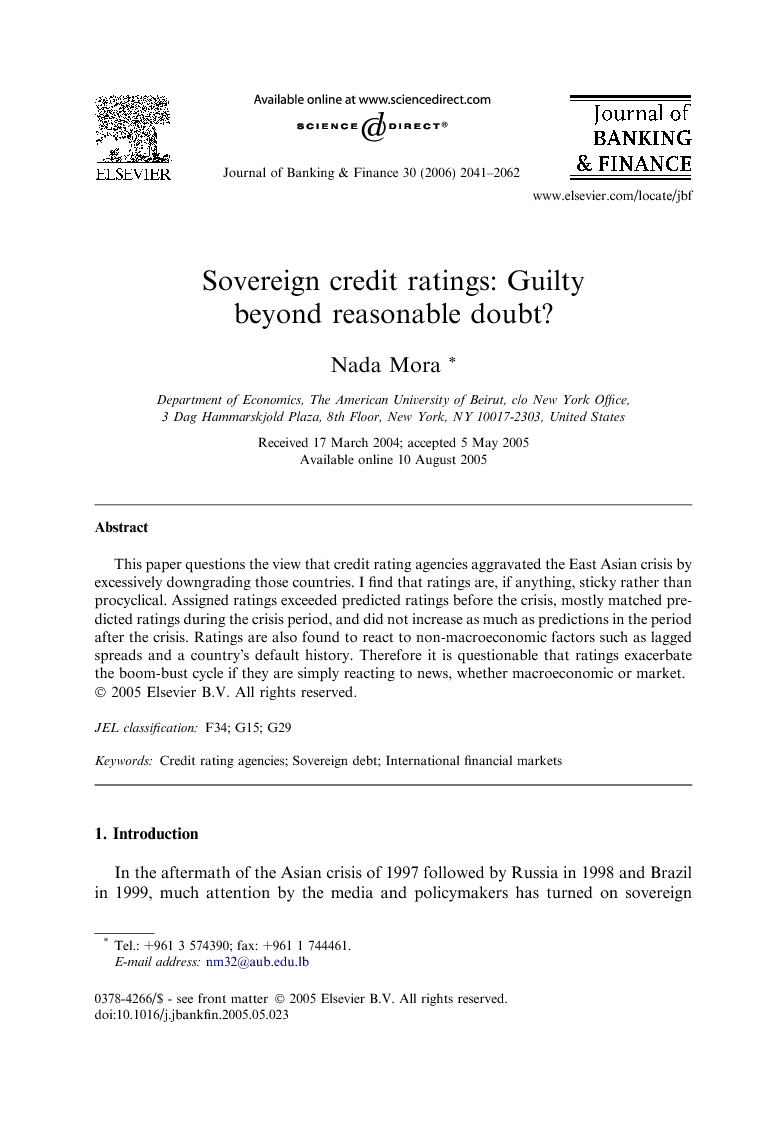 This paper questions the view that credit rating agencies aggravated the East Asian crisis by excessively downgrading those countries. I find that ratings are, if anything, sticky rather than procyclical. Assigned ratings exceeded predicted ratings before the crisis, mostly matched predicted ratings during the crisis period, and did not increase as much as predictions in the period after the crisis. Ratings are also found to react to non-macroeconomic factors such as lagged spreads and a country’s default history. Therefore it is questionable that ratings exacerbate the boom-bust cycle if they are simply reacting to news, whether macroeconomic or market.

In short, I argue that the case for the guilt of sovereign credit rating agencies is not tenable. This paper was written to investigate the view of Ferri et al. (1999) and others that credit rating agencies have a strong impact on market expectations, thereby damaging the macroeconomic fundamentals of a country and aggravating crises. This paper suggests a more cautious view. There is little support for assigned ratings being excessively conservative during the crisis period from 1997 to 1998. When not including country fixed effects, ratings are found to be sticky rather than procyclical.33 While there is support for the FLS finding that predicted ratings were lower than assigned ratings during the period prior to the crisis, this is consistent with both the FLS and inertia views. That ratings are not found to be predicted higher than assigned during the crisis period weakens the FLS view. The additional advantage of this study is that it extends the sample period to the post-crisis period from 1999 to 2001. This helps reveal inertia in ratings. Predicted ratings are found to be higher than assigned ratings during this period (when not including country fixed effects). Therefore they capture the crisis but remain over-conservative after the crisis. Ratings adjust only when there is a sufficiently large divergence of predicted ratings from assigned ratings. I also find that in a model where ratings react passively to market sentiment (as proxied by spreads), then the drying up of credit might be attributed to excessive downgrading, even though it would have occurred regardless. Ratings are also found to be influenced by a country’s default history, which may be capturing political factors that are value-relevant. Although ratings may to the most part be reacting to macroeconomic and market news, this does not imply that their use in statuary requirements is benign. This particularly deserves attention with the introduction of ratings into the latest Basel II proposal for determining risk weights for bank loans. This point is well made by Kashyap and Stein (2004) who argue that a single time-invariant risk curve that maps credit-risk measures (such as ratings) into capital charges is sub-optimal. They make a case for having a family of risk curves such that the capital charge is reduced when economy-wide bank capital is scarce, such as during recessions. Others, such as The Economist (2/6/2003), call for taking credit ratings completely out of financial regulation and using instead the spreads at which secondary market debt securities trade. More careful study is needed prior to 2007 when Basel II is expected to take effect so that the new capital standards do not exacerbate business cycle fluctuations. There are good reasons for capital requirements to be countercyclical, but this does not imply that ratings can be expected to be countercyclical. Instead, their use for regulatory reasons should be carefully evaluated.