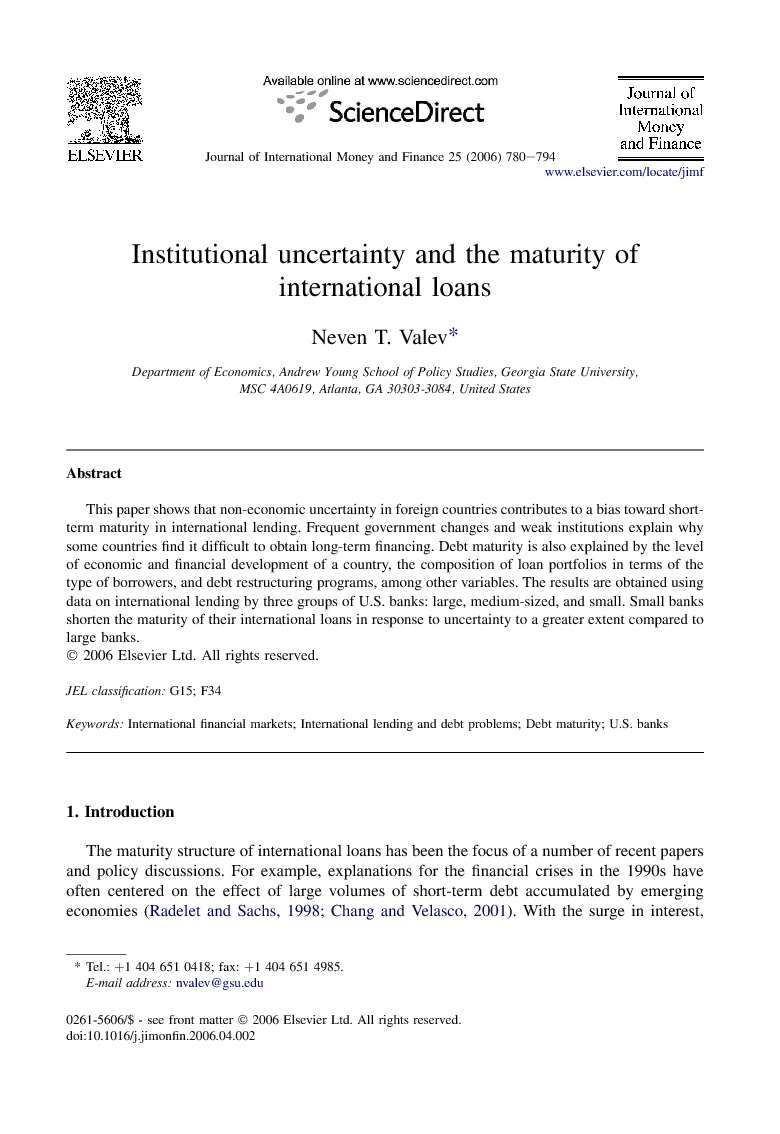 This paper shows that non-economic uncertainty in foreign countries contributes to a bias toward short-term maturity in international lending. Frequent government changes and weak institutions explain why some countries find it difficult to obtain long-term financing. Debt maturity is also explained by the level of economic and financial development of a country, the composition of loan portfolios in terms of the type of borrowers, and debt restructuring programs, among other variables. The results are obtained using data on international lending by three groups of U.S. banks: large, medium-sized, and small. Small banks shorten the maturity of their international loans in response to uncertainty to a greater extent compared to large banks

The maturity structure of international loans has been the focus of a number of recent papers and policy discussions. For example, explanations for the financial crises in the 1990s have often centered on the effect of large volumes of short-term debt accumulated by emerging economies (Radelet and Sachs, 1998 and Chang and Velasco, 2001). With the surge in interest, several papers have also opened a discussion on the factors that contribute to short maturities in international lending. One important theme in the literature is that foreign lenders face uncertainty about the preferences and policies of policymakers in terms of debt repayment. In the theoretical part of Rodrik and Velasco (1999), uncertainty is modeled as the likelihood that a “populist” (as opposed to an “orthodox”) government comes to power. As “populist” governments are more likely to default on international loans, lenders prefer to lend short-term and decide whether or not to roll over their loans depending on the election outcome.1Rodrik and Velasco (1999) then go on to examine empirically the determinants of the maturity of international loans. Interestingly, however, their empirical model does not include variables that measure the political and institutional risks emphasized in the theoretical model. This paper explores the effect of such variables using data on international lending by U.S. banks. During the 1982–1996 period studied here, 62 percent of the international loans of U.S. banks had maturity of one year or less and 15 percent had maturity of more than five years. There was much variation across different countries. In some countries, more than half of the loans had maturity of more than one year and in some countries close to 90 percent of the loans had maturity of one year or less. The empirical tests show that non-economic uncertainty contributed significantly to explain those variations. The paper makes contributions to several strands in the literature. First, the paper contributes to the literature on political risk in international lending. In Citron and Nickelsburg (1987) and Ozler and Tabellini (1991) governments face a trade-off between current consumption and servicing international debt. Servicing debt ensures future access to international capital markets. In countries with high political uncertainty, current governments discount more heavily future gains from access to capital markets and, therefore, are more likely to default. Based on such framework, the literature has shown that political uncertainty (usually measured as frequent changes in government) is associated with greater default probabilities and with greater cost of borrowed funds (see De Haan et al., 1997, for a recent survey). This paper offers evidence that political uncertainty also affects debt maturity. Second, the paper contributes to the literature on debt maturity. Most of that literature is on corporate debt (see Ravid, 1996, for a comprehensive survey) and not much has been done on the maturity of international credit. Rodrik and Velasco (1999) were probably the first to offer such evidence. They explain debt maturity by several country characteristics, which are also used in the analysis here. Recently, Buch (2003) and Buch and Lusinyan (2003) have adopted the empirical framework of Rodrik and Velasco (1999) to study the maturity of international credit by German banks and lending by BIS (Bank for International Settlements) reporting institutions. Broner et al. (2004) study the maturity and term premium of international bond issues by seven emerging economies, showing an increase in the cost of long-term credit relative to short-term credit during crisis periods. The empirical tests here extend those analyses by incorporating measures of non-economic uncertainty. In that sense, the paper is close to Miller (1997), who shows that political uncertainty leads to a tilt toward short-term maturity on domestic government debt in 17 OECD economies. Here, a similar result is obtained for international credit. Third, the paper contributes to a literature that has highlighted important differences among banks when lending internationally. Barron and Valev (2000) assume that there is a fixed cost component to obtain information on international lending opportunities. Banks with larger international portfolios (larger banks) find it more advantageous to acquire costly information. In that framework, if one allows larger banks to react to their “better” information, and in particular react to negative information by selling their long-term bonds prior to new negative information being revealed, the larger banks can reap a higher expected return on long-term bonds compared to smaller banks. Thus one would expect a higher proportion of long-term maturity bonds in large banks' portfolios. A similar prediction can be drawn from Miller (1997), where preferences for short-term debt are explained by the degree of risk aversion of lenders. Assuming that smaller banks are more risk-averse when lending internationally, one would expect a smaller proportion of long-term debt in their international portfolios. Consistent with those predictions, this paper shows that smaller U.S. banks lend more short-term compared to larger banks. Smaller banks are more sensitive to institutional uncertainty in foreign countries. The shortening of credit maturity in response to such uncertainty is stronger for smaller banks than for larger banks.2 Finally, the paper fits in an extensive literature that has studied empirically the volume of international lending by U.S. banks (Dahl and Shrieves, 1999 and Thapa and Mehta, 1991), international branch expansion (Goldberg and Johnson, 1990), the prices of loans (Ozler, 1993), volatility (Goldberg, 2002), herd behavior (Jain and Gupta, 1987 and Barron and Valev, 2000), and the effect of emerging market crises on the stock valuation of U.S. banks with exposure in those markets (Kyle and Wirick, 1990). This paper contributes with analysis of the maturity of international loans. The rest of the paper is structured as follows. The next two sections present the international lending data and the measures non-economic uncertainty. Following that, the paper discusses the empirical model and presents empirical results. Section 6 concludes.

The empirical evidence presented in this paper shows that non-economic uncertainty in foreign countries leads to shorter maturity of international loans to those countries. The tests are based on recent theoretical work and extend the empirical analyses of Rodrik and Velasco (1999) and Buch and Lusinyan (2003) on the determinants of the maturity of international debt. The paper also documents important differences in behavior among banks of different sizes. Smaller banks lend more short-term compared to larger banks. The maturity of their international loans is shortened in response to institution uncertainty to a larger extent compared to larger banks. The results contain a clear policy message. Institutional uncertainty is detrimental for countries that try to lengthen the maturity of their international borrowings. While the results are intuitively appealing, they are not a foregone conclusion. The response to risk in international lending can be multifaceted. The literature has documented that lenders adjust loan amounts and interest rates in response to risk (see Burton and Inoue, 1985). This paper shows that a third major component of loan contracts, maturity, are also affected. Sanders (1999) points out that the true price of loans includes maturity and size as well as interest rates and fees. Because of the complexity of modeling that decision-making process, however, the literature has taken a more streamlined approach, studying each of those responses one at a time. A fuller model would incorporate more of those aspects simultaneously. The results of the paper highlight important differences between various measures of non-economic uncertainty. Generally, the paper distinguishes between political instability measured by the number of government changes (major or otherwise), institutional uncertainty in terms of the rule of law and the quality of the bureaucracy measured by the ICRG variables, and, to some extent, the legal provisions for creditor protection measured by the La Porta et al. (1998) index. These three types of non-economic uncertainty are not highly correlated. Countries that have adopted creditor-friendly laws don't necessarily enforce them. Countries with frequently changing governments don't necessarily have unstable institutions. In terms of debt maturity, what seems to matter are institutional uncertainty and radical government changes. Future research might further improve our understanding of the relationships between the various types of non-economic uncertainty and their influences of investment decisions. Further steps in this research should also identify more factors that contribute to uncertainty. Volatility in output, foreign exchange reserves, or exchange rates are candidates, although the theoretical literature has not yet produced predictions about those variables as it has regarding non-economic uncertainty. The corporate finance literature on debt maturity has made important advances theoretically and empirically (see Ravid, 1996) but those ideas have not yet been fully implemented in terms of international debt maturity. Thus, this topic presents a number of interesting opportunities for research.