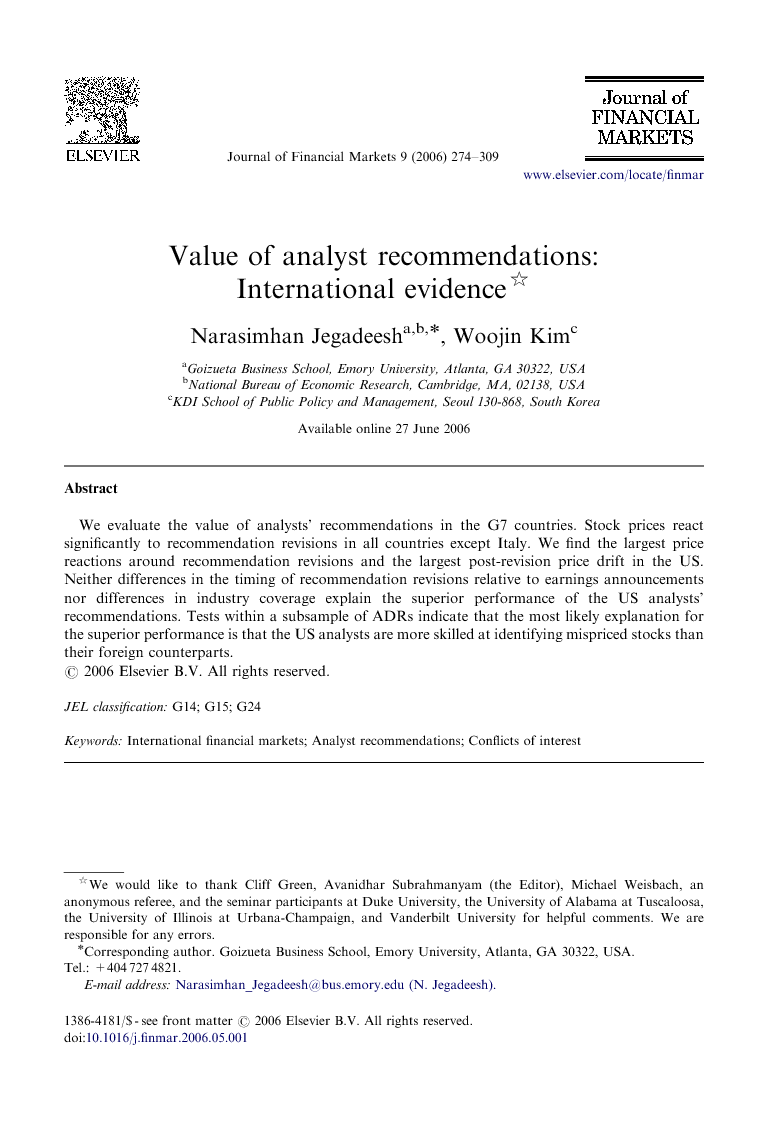 This paper examines analyst recommendations in the G7 countries and evaluates the value of these recommendations. We find that stock prices react significantly to recommendation revisions on the day of recommendation and on the following day in all of these countries except Italy. Stock prices continue to drift up for upgrades and down for downgrades over the next two to six months. We find the largest price drifts in the US, followed by Japan. These are the two largest markets in the world, and our evidence indicates that the value of analyst recommendations is the largest in these countries. Additionally, we examine the value of analysts’ recommendations for ADRs that are followed by both US analysts and foreign analysts. US analysts’ recommendations add more value than the recommendations by analysts in other countries for this subsample of stocks as well. These findings indicate that the US analysts add more value because of their skills, rather than because the US market is less informationally efficient than the other markets. We test an alternative possibility that US analysts time their revisions close to earnings announcements and find no support for this view. We also examine the performance of calendar-time trading strategies that buy upgraded stocks and sell downgraded stocks. We consider several strategies with different holding periods, and with different delays between the time when revisions are made and the time when the stocks enter the portfolios. The equal-weighted strategies with no delays and with holding periods of one month are profitable in all countries, except Italy, before transaction costs. The value-weighted strategies, however, are profitable only for a one-month holding period strategy that is initiated without a delay. All these strategies are more profitable for small firms than for large firms. Among the G7 countries, we find that the trading strategies are the most profitable in the US, across all horizons. Our evidence indicates that the market is not semi-strong form efficient in the countries in our sample, despite the fact that these countries have the most developed stock markets in the world. Although the profits from these trading strategies are probably smaller than reasonable transaction cost bounds considered by Barber et al. (2001), it is possible that investors can profitably use recommendation revisions in combination with other signals in their trading strategies. For instance, Jegadeesh et al. (2004) show that in the US, recommendation revisions in combination with several momentum and value signals earn significant profits. Such strategies may work in the other countries as well. However, the US results may not carry over to other countries because the analysts outside the US add less value. We leave the analysis of the incremental value of recommendations in other countries for future research. Our comparative analysis of the value of analyst recommendation in developed countries also provides a basis for assessing the likely benefits to investors of the recent regulatory settlement with brokerage firms. This settlement includes provisions to restrict links between the investment banking and the stock research departments, and to promote independent research. The settlement will likely promote more ethical practices, and make analysts less reluctant to issue sell recommendations than they have been in the past. In fact, we do find that sell recommendations are more common in the post-settlement period.29 The recommendations levels also exhibit more cross-sectional variation in 2003 than in the earlier years. Neither the frequency of sell recommendations nor the cross-sectional variability, however, need translate into more value for investors. During our sample period, the US had the lowest frequency of sell recommendation among all countries we examine. Also, the issue of analysts’ conflict of interest has not been a major public concern outside the US. However, analyst recommendations in the US provide the most value for investors. It seems likely that the US investors were able to see through potential conflicts of interest, even prior to the settlement. Furthermore, the evidence that analysts in all of the most developed countries add only a modest amount of value through their recommendations suggests that these markets are fairly efficient, and it is unlikely that analysts can routinely uncover larger mispricings. Therefore, we do not see any reason to expect that the recommendations of the US analysts will perform any better in the future, even with the current efforts to remove their conflicting incentives, than they have in the past. In fact, we would caution limiting analysts’ role in investment banking business. Brokerage houses pay analysts for the value they add to the firm. If analysts’ role in the investment banking arena were restricted, then their compensations would likely decline in the future.30 As a consequence, tighter restrictions on analysts’ activities could lead to a decline in the skill level of analysts, and thereby adversely affect the value of their recommendations.